Hot of the release of the finale of The Book of Boba Fett, Hot Toys reveals their latest Quarter Scale figure: Boba Fett (QS22). Click through for details and gallery images. 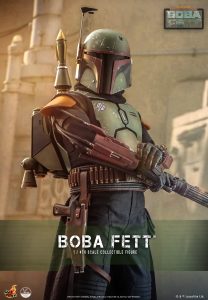 “I know you sit on the throne of your former employer.”

Every galaxy has an underworld. In The Book of Boba Fett, Star Wars™ fans are introduced to Boba Fett’s™ journey as the new daimyo of the criminal empire on Tatooine™ after he usurped power from Bib Fortuna™. However, this underworld proves to be dangerous and Fett needs to prepare to fight for his new position…

The highly-accurate quarter scale figure is skillfully crafted based on the appearance of the character from The Book of Boba Fett. It stands approximately 45cm tall, featuring a newly developed head sculpt with extraordinary likeness, meticulously made armor and interchangeable helmet, specially tailored outfit, an attachable jetpack, blaster rifle, flamethrower effect, miniature holograms and a display base.

This amazing 1/4 scale figure will be a great addition to your display!