Hot Toys is also offering a Deluxe Version of The Book of Boba Fett Quarter Scale Boba Fett (QS23). Click through to check out this version, which includes an added environmental base. 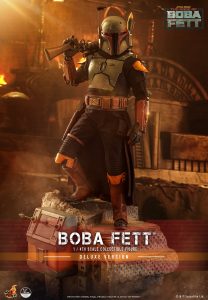 “Jabba™ ruled with fear. I intend to rule with respect.”

After eliminating Bib Fortuna™, Boba Fett’s™ journey becoming the new daimyo of the criminal empire on Tatooine™ proves to be challenging and he must prepare to fight for his newfound status in the dangerous underworld…

This Deluxe Version will exclusively include a diorama base figure based inspired by Boba Fett’s new palace throne room with LED light-up function!

Pay your tribute to the daimyo today!