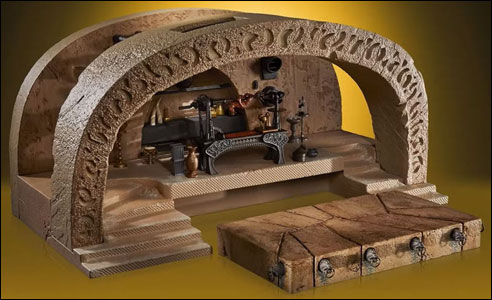 1. Hasbro is ignoring the Original Trilogy regarding iconic Star Wars environments, and it has to cease.

Yeah, we get it. New Star Wars Entertainment. Blabbity, blah-blah, barf. Whatever. Let’s face it. Whether you like other stuff besides the OT (fantastic for you), The Vintage Collection is primarily an Original Trilogy-focused line. And while Hasbro has done a fair share of getting excellent all-new and repacked OT characters into the line, there is so much more they should be doing. Hasbro should have focused an iconic environment like JABBA’S PALACE on the Original Trilogy. Let’s pretend The Khetanna didn’t explode, or let’s say there was another, and it became part of Boba Fett’s Book (or whatever the heck that Disney Star Wars show is called). How would you feel about Hasbro packing it something else besides the Return Of The Jedi logo? It would suck. That’s about where many are regarding the new Jabba’s Palace Throne Room playset.

2. Hasbro robbed collectors by not killing two birds with one stone, even if it meant a higher MSRP, but with minimal additional cost to their bottom line.

OK, so let’s say Hasbro HAD to put the stupid Boba Fett’s Book logo on the box because of some unnatural Disney directive. So be it. Then why couldn’t they do a two-for-one with it? Do you recall the Galaxy’s Edge Millennium Falcon (Smuggler’s Run) vehicle? While the point here is a stretch, its spirit is nonetheless poignant. Hasbro included a power switch on the vehicle, which allowed you to turn off the dreadful Sequel Trilogy-themed sound effects and lights, so collectors could keep it Original Trilogy focused. So how about taking the concept of this idea and extrapolating upon it with Jabba’s Palace? What’s distressing is that they already have all the parts to do it, and it was right within their reach!

3. Hasbro already has existing parts from the Original Trilogy (i.e., no additional tooling budget expense) that could be recast, repainted to match, re-released, and included with this playset.

Do you remember 2010’s Star Wars [Shadow Of The Dark Side] Jabba’s Throne Walmart exclusive? The set contains a terrible Jabba The Hutt figure. However, Hasbro corrected it with The Black Series’ all-new release and included a fantastic array of environment parts. (The dais in the new set is from the Walmart exclusive.) Hasbro SHOULD HAVE grabbed every last one of the accessories in that set, including the rug, pillows, railing, and frog tanks. Then we’d suggest repackaging the Jabba The Hutt figure from The Khetanna as well. We also think they should take the Oola and Salacious Crumb figures from that set and card them on a Return Of The Jedi logo to get it out in TVC finally. (I see a VC66 figure finally released!) These options would give TVC collectors a complete Disney Star Wars interpretation of Jabba’s Palace Throne Room and the real Original Trilogy version of Jabba’s Palace Throne Room. It’s so simple it seems ludicrous not to do.

Yup. But let’s say that the addition of the extras we suggested raised the price of this set to $249.99 or $299.99. Don’t you think getting two complete playset scenarios would warrant that price? And this is our lot in life. It’s a novelty collectors’ line. We will continue to pay laughable costs for our toys. But Hasbro needs to provide what we want to get our money. Heck, for good measure, Hasbro could include a complete BG-J38 or transform it into 8D8 and card it for us. The possibilities are endless. Oh, and they could also offer FREE SHIPPING on all orders. After all, this whole thing looks and smells like a Hasbro-backed HasLab project anyway, LOL. And they forced it into a “direct-to-market” sales program that gives collectors no other options.

As is, we feel the set MRSP of $229.99 is just a tad too much for what they’re including. They could pad and pack this set for minimal cost on their end, and it would be a shame if they didn’t make the most of it.