Movie Heroes Basic Assortments
We called them “Movie Zeroes” when first announced. Hasbro felt they could re-release some of their worst action figures of all time and charge $10 a piece for them. Most disconcerting was the Battle Droid. Just five years earlier, Hasbro created multiple Battle Droid two-packs for the Saga Legends line (both 5POA and super-articulated) and charged $7.99 for the pair. How did they ever think they’d get $10 for one 5POA version? After the terrible first wave, the Movie Heroes line became a little more interesting, although it never grabbed the super-articulated crowd that strongly. Hasbro added light-up features to some of the candidates, and while they looked excellent in displays, their limited articulation was frustrating at best. Collectors also didn’t understand why the Movie Heroes characters got new portraits when they should have been reserved for The Vintage Collection wave 10 figures, but more on them later. The overproduced cases of Movie Heroes wave 1 created a log jam in the line that it hadn’t ever seen to date. And future case assortments didn’t arrive in stores, and most collectors could only acquire them online. By the end of the line, the bottleneck was so bad that the final wave never made it to the USA and became a de facto European exclusive wave. 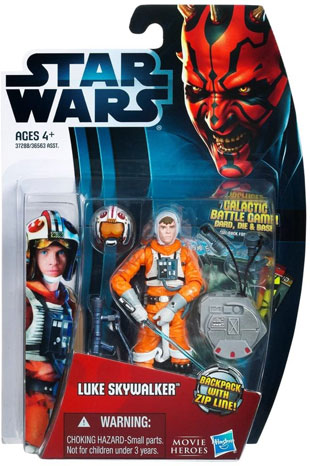 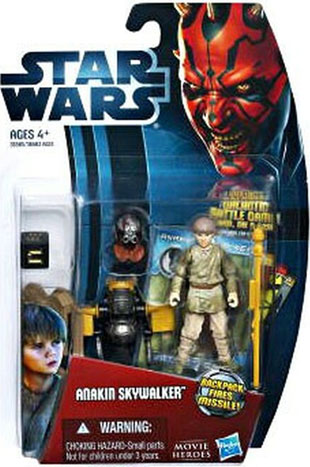 The Clone Wars Basic Figure Assortments
Viewership for The Clone Wars television series came crashing down from its record-breaking high point around 2011, but the toy line was still popular. Hasbro believed they could absorb The Clone Wars figures (which they still were making in animated style) into the mainline packaging, yet still retain The Clone Wars logo precariously placed on the line look template. This approach meant that The Clone Wars figures would be interactive with the Movie Heroes line, both in packaging style and the Star Wars Galactic Battle Game, where each figure in these lines came with a playing card and die. Just like the Movie Heroes line, Hasbro overproduced the first wave of The Clone Wars figures, and subsequent waves rarely, if ever, made an appearance at retail. Today, some of the tail-end figures command a lot of money on the aftermarket. Figures like Clone Commander Fox were the sole new figure in the latest case assortment. Will Hasbro ever get case assortment ratios? 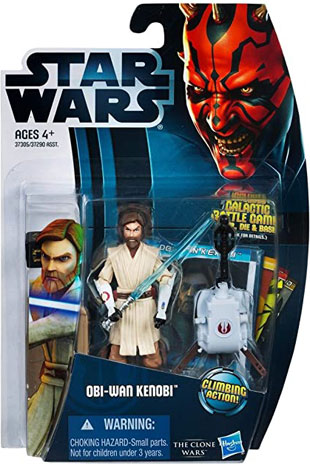 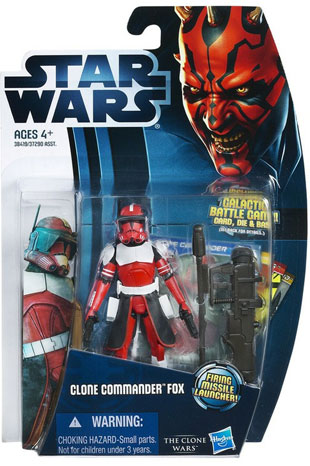 Discover The Force — Walmart Exclusives
There was a third collection of action figures for the Star Wars [The Phantom Menace 3D] lineup, and they placed them under the Discover The Force promotion, which was part of Walmart’s exclusive program that year. Hasbro and Walmart worked together to develop 16 exclusive products (each item was distinguished with a number) for the promotion. They included 12 collector-focused super-articulated basic figures, two Battle Packs sets, one vehicle, one creature (a Dewback), and one Qui-Gon Jinn lightsaber roleplay toy. Collectors once again had mixed feelings about these exclusives, but many of them quickly sold, and we received some fabulous updates to characters Hasbro didn’t revisit in years. The Royal Starship Droids Battle Packs set immediately disappeared. And collectors were thrilled for an updated Ric Olie, Aurra Sing, and Gungan Warrior, as well as the first time offered Mawhonic and G8-R3. Also appreciated by collectors were the updates made to the Destroyer Droid and Tusken Raider. Collectors were also happy to see an Episode I update to a correctly sized Vulture Droid. While many of us were eager to see an Episode I dewback, Hasbro didn’t include the extra gear that made it Episode I-specific. The rest of the Discover The Force lineup figures were met with aggravation by collectors. Why are Qui-Gon Jinn and Obi-Wan Kenobi in this line too? As you imagine, some figures hung around a lot longer than they should have. 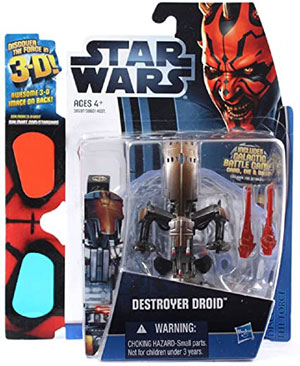 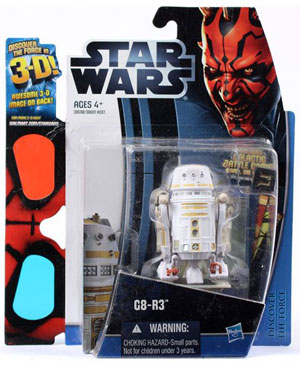 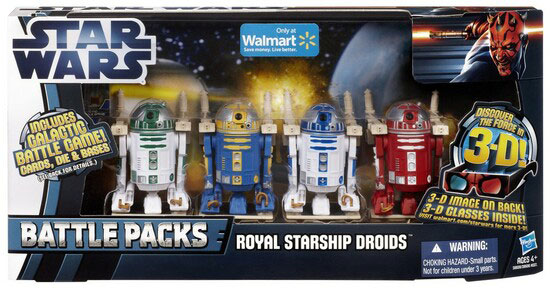 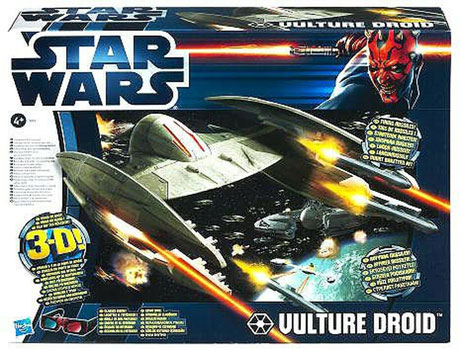 Class I Vehicle Assortments
The Class I vehicle assortments that were hugely popular during The Clone Wars peak were carried over into the Star Wars [The Phantom Menace 3D] line in 2012. However, they focused on characters and concepts from Episode I instead. Like every other product line and sub-line in this collection, the over-forecasted lineup was overbought by retail, and wave 1 of every toy type clogged the pegs and shelves for an inordinately long time. Hasbro reserved the best concepts for later waves, and the products collectors wanted most didn’t arrive at retail. Many relied on the aftermarket to secure them. It’s important to note that the BARC Speeder set is, to date, the only way collectors can add the “all-white” Phase II Clone Trooper to their collections that use the VC45 Clone Trooper buck. 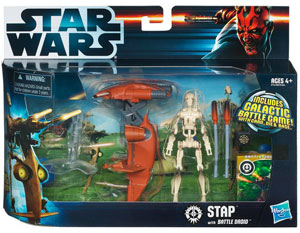 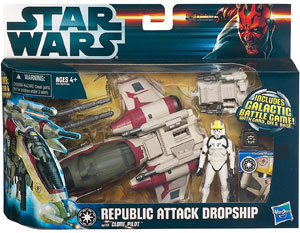 Class II Vehicle Assortments
While collectors sighed about Hasbro reissuing multiple vehicles from 1999 into the 2012 product line, very few took notice that Hasbro updated many of them to keep them fresh for Star Wars [The Phantom Menace 3D] lineup. For instance, the Trade Federation AAT (Armored Assault Tank) received a newly revised cockpit and an all-new paint job. The Naboo Starfighter received an updated functioning droid socket and other enhancements. But as usual, some of the incredibly updated vehicles, like the Naboo Starfighter and the Republic Fighter Tank, never saw daylight at retail, and many collectors only found them at overstock clearance outlets or online. Some of the other vehicles, like the podracers and Darth Maul’s Sith infiltrator, also received new paint jobs, making them feel refreshed so many years later. 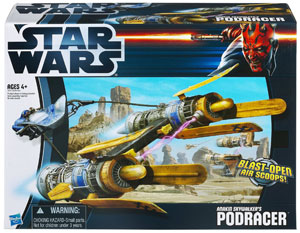 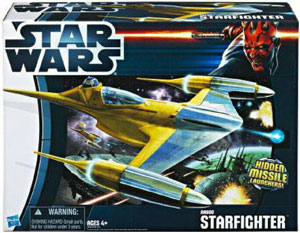 Class III Vehicle
Hasbro released a “rare” Class III vehicle in 2012, and JTA was the first to break the news on its impending announcement. Hasbro went back to create the most visible vehicle during the Battle of Naboo, the Trade Federation MTT (Multi Troop Transport). While scaled down from its original size in the film, Hasbro packed this vehicle/playset with many features. It included 20 static Battle Droid action figures, interaction with a release from the Class I vehicle assortment, and a large action figure line of 3.75-inch action figures to set up around it. The vehicle also came with electronics and included a motorized troop deployment rack. Too bad the Battle Droids didn’t arrive in collapsed status and had articulation to make them fighting machines like in the film. The price was reasonable, but the modern Star Wars collector’s typical nature was to wait for clearance fodder, but it didn’t sell too well and collectors found it at places like Ross and TJ Maxx just a few months later.

Battle Packs
After Hasbro reduced the number of figures in the Battle Packs line from five to three, few collectors felt the sub-line had longevity. But Hasbro surprised us with the announcement of additional sets, but many would come with 5POA action figures instead. Generally speaking, the final products were bittersweet. Some collectors refused to buy multipacks with 5POA action figures in them. However, sets like the Republic Clone Troopers contained three long-awaited characters from The Clone Wars television show. So few collectors could resist. Ultimately, the format failed as collectors could not find the same value in the Battle Packs line as they did years ago. 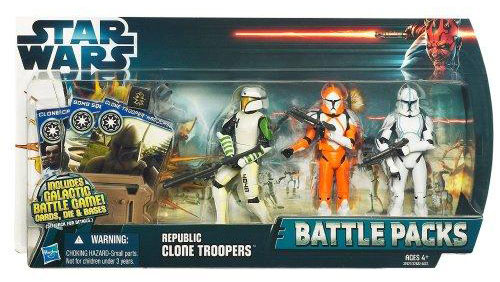 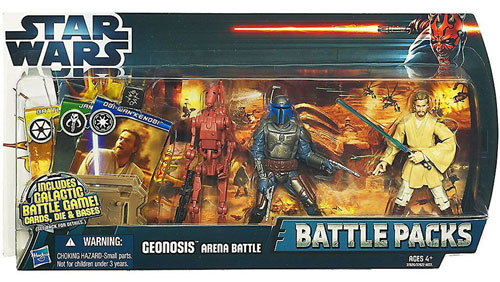 Miscellaneous Exclusives
Despite many general marketplace items satisfying collectors, some of the most impressive products came from retailer exclusives. Unsure why Hasbro didn’t make many of these parts of The Vintage Collection line, they were nonetheless embraced by Star Wars collecting community. Who didn’t fall in love with these three Toys R Us exclusives? Ewok Pack, Yavin Pilot Pack, and Speeder Bike With Scout Trooper. All contained collector-friendly super-articulated action figures and added MANY characters to the line that many of us never expected to see. Another Toys R Us exclusive multipack called Podracer Pilots gave collectors another chance to purchase Podracer Pilots they may have missed previously. All came with revised paint jobs. There was also a Target exclusive Battle Packs set released titled Darth Maul Returns which included a retooled canceled Comic Packs figure that was converted into the line’s first Nightsister character. Target was also given two Movie Heroes two-packs which contain characters like Darth Vader and Darth Sidious. Another surprise release was the Ultimate Gift Set of the 104th Battalion “Wolf Pack” Clone Troopers that helped us add additional Plo Koon’s battalion members into our collections. As you can see, the line was rich in retail store exclusives. 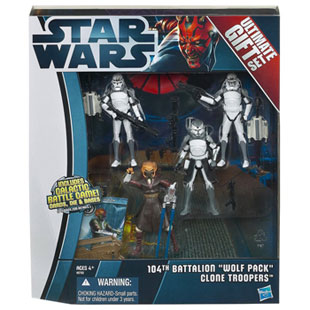 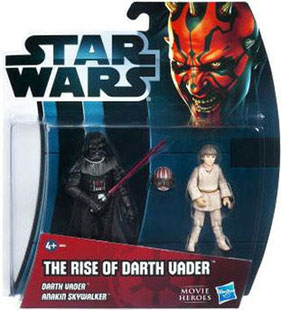 We’d be remiss not to mention the twelve action figures Hasbro released in The Vintage Collection that supported the Star Wars [The Phantom Menace 3D] line. Check out those dozen figures HERE. They also share the same street date as the TPM 3D products.

That’s all, folks! Please visit ANY of the products listed here in our Research Droids Reviews found HERE.