What Are Your Predictions For The Book Of Boba Fett?

The Book of Boba Fett will be released in three days from now, with the first episode becoming available on December 29th. The various (teaser) trailers only show us scenes from the first few minutes of the first episode. In true Lucasfilm fashion everything about the show is top secret. A recent Hollywood Reporter article highlights this fact once more. Ming-Na Wen, who portrays Fennec Shand, didn’t even know what Disney hired her for when she was offered the role. At first she naturally assumed she would be filming season 3 of The Mandalorian, it was only when she arrived on set that she found out that she’s actually filming a brand new show.

Since we (officially) know so little about the series I thought it would be fun to speculate. What will happen in The Book of Boba Fett? What will it be about? Who will make an appearance in the series? What is the likelihood of a Rancor scene in The Book of Boba Fett that Hasbro never knew about and thus giving their failed HasLab the worst timing possible? Click through to merrily speculate away and to post your predictions. And beware, there may be spoilers! So spoiler-phobes should stay away! 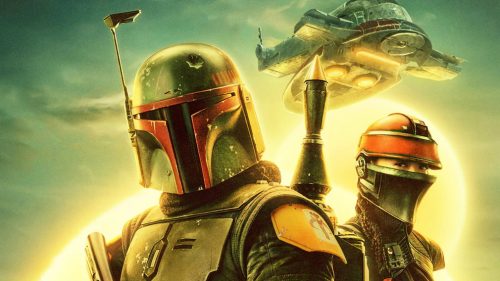 There are few credible rumors this time around, just like for The Mandalorian security for the Favreau project seems to be quite effective, unlike The Last Jedi or The Rise of Skywalker, both of which were more or less completely spoiled before release.

There are rumors that Harrison Ford may make an appearance as young Han Solo, similar to Luke’s appearance in season 2 of The Mandalorian. Then there are rumors that Grogu (and The Mandalorian) may appear. Yet another rumor claims that the villain of The Book of Boba Fett will be none other than Qi’Ra, played by Emilia Clarke, who leads Crimson Dawn and thus The Book of Boba Fett would, in a way, continue a storyline from Solo with Boba Fett going against Crimson Dawn as he tries to become the number one crime lord on Tatooine.

Emilia Clarke’s IMDB listing shows no projects for her in 2021, which is somewhat conspicuous, since she had plenty of jobs before and even a couple of roles in upcoming releases, just nothing for 2021. So did she take a year off or was she hired for a secret project she is not allowed to talk about? Qi’Ra also re-appeared in comics again in 2021. So maybe Qi’Ra will make an appearance in The Book of Boba Fett.

But what are your predictions? What will the series be all about? Would Boba’s rise to power on Tatooine give us enough plot for 7 episodes? Or will The Book of Boba Fett be about something much bigger?

Will Omega be mentioned? Or may Omega even appear as an adult? For those who don’t know, because they never watched The Bad Batch… Boba Fett has a “sister”, Omega is a Jango clone like Boba, but she’s female (Star Wars and science have never been on friendly terms…) and she’s around Boba’s age.

Could clones make an appearance?

So the big question is: will The Book of Boba Fett be mostly its own thing, isolated from other movies and series, or will it be integrated with everything else and connect various movies and shows like Solo, The Bad Batch, The Clone Wars, The Mandalorian and possibly even other things?

What would you like to see in The Book of Boba Fett? What do you think will happen?