Website AllEars.net has uploaded the welcome message Disney sends out to people who booked a stay at the Galactic Starcruiser on Twitter. The video is two minutes long and features a female employee of the fictional cruise line telling customers what to expect onboard the space ship. Click here or on the screenshot below to watch the video on Twitter! Then click through for a short discussion! 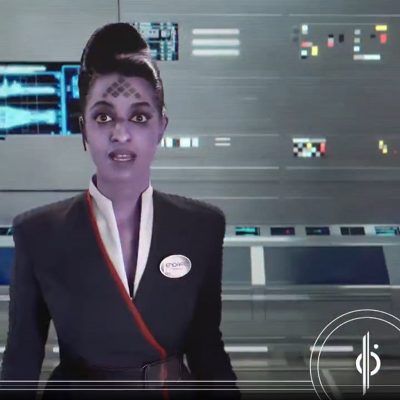 In my opinion this short clip meant to welcome guests who booked the Star Wars hotel does Disney no favors yet again. Production values are not the best, the background looks cheap and once more, the acting is a little bit over the top.

But the worst problem is, in my opinion, that Disney is competing with actual 5 star hotels all across the world with their Galactic Starcruiser. Remember, that the lowest amount you have to pay is something like $750 per night if you go with a family of four. Only children younger than 10 pay somewhat less, children above the age of ten are considered adults. If you go with just a friend or your partner the minimum you have to pay is more than $1,200.

And here is the thing: for this kind of money you can book a stay at an actual 5 star hotel. In fact, you can even book a stay at the most exquisite 7 star hotel in the world in Dubai: the Burj Al Arab Jumeirah. Sure, for American guests the flight to Dubai may be a little more expensive, but not necessarily for international tourists.

I was curious so I checked what two nights at the Burj Al Arab Jumeirah would cost for two people, if you stay from March 1st 2022 – March 3rd 2022, the first week the new Star Wars hotel will open for guests.

And this is it: two nights at one of the most exclusive hotels in the world costs $3,840 for the entire suite (2 people). $1,000 less than the Galactic Starcruiser.

But this is what you get when you book a stay at the Burj Al Arab Jumeirah: you get a 170 m² / 1,830 sqft suite with one extra bedroom on the upper level of the suite, your own whirlpool and of course a view of the ocean, plus all the amenities you would expect from a world class hotel like a spa & wellness center, pool etc.
None of these standard amenities virtually any hotel will offer are actually available in the Star Wars hotel, instead you get lightsaber training, you see an actor in a Chewbacca costume, Kylo Ren and probably Rey. And the staff pretends to be fictional characters and will probably not talk to you like any normal person would, but it will be highly scripted and supervised.

The more I think about the whole thing the less sense this Star Wars hotel makes to me, not when Disney charges these outrageous prices.

Finally, what do people think of when they hear Star Wars? Gritty, somewhat shady places? Or simple things like the Lars Homestead? Would anyone associate luxury cruises with Star Wars? Or english language pop songs? All the songs you ever hear in Star Wars (ignoring the Holiday Special) are in alien languages. Why didn’t Disney design an animatronic alien band (or using people in costumes) à la Max Rebo or Nodal Modes with a singer in costume singing in some actual Star Wars language? In my opinion the entire concept stands on shaky feet.

Next Article: The Vintage Collection: The Ninety Six - THE POWER OF THE FORCE Artoo-Detoo (R2-D2) with pop-up Lightsaber