Hasbro’s G.I. Joe team and fans have reason to celebrate. The Skystriker Haslab is fully funded! With more than 8 hours to go the Skystriker will certainly unlock one or even more tiers. Maybe Hasbro’s Star Wars team can visit their colleagues in the G.I. Joe offices and get a primer on how to engage fans. The G.I. Joe team had a livestream on Instagram today, they also post regular updates, whereas the Star Wars team kept radio silence yesterday, leaving former Star Wars team member Steve Evans to post something on his Instagram. Anyway, this means two out of three HasLabs are a success, only Star Wars failed. But now is the time for G.I. Joe collectors to pop the champagne!

UPDATE: Tier 2 was unlocked, final backer count is 16,803. The Skystriker added almost 9,000 backers on the final day and more than doubled its numbers. Backers will now get the jet with a total of seven 3.75 in figures. 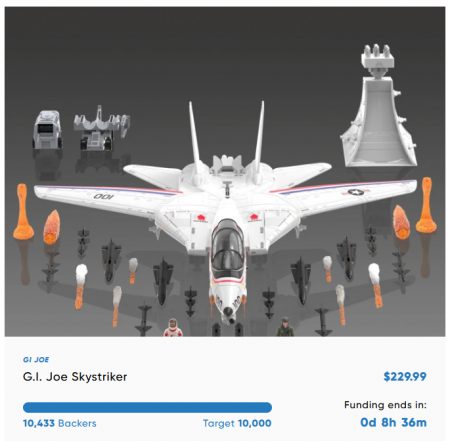