Now that was one hell of a night. We had lots of fun here on JTA in the comments section and watched with awe as the Rancor backer count on HasLab literally exploded in the last few hours. For the longest time it seemed as if the final number would be something like 7,800, far short of the funding goal, but when midnight came it was 8,534!

And the only people to blame for this are working at Hasbro and Lucasfilm. They miscalculated, they hoped a Haslab with nonsensical tiers consisting of repacks, cheap bones, cardboard and a Rancor centerpiece that is not remotely as impressive as the barge or the Razor Crest would make collectors pay $350 for it. But it didn’t! The only hope is that Hasbro (and their partner Lucasfilm who has total control over everything) learn from their mistakes. Maybe collectors are finally fed up with a toyline that mostly consists of repaints, repacks, kitbashes and exclusives these days. The mainline is still strong, but far too few figures are released in it, most figures these days are exclusives, repaints and repacks to the point that even the HasLab Rancor had several of them as tiers. Click through for more!

And this is a screenshot of the HasLab page for the Rancor 33 minutes after the deadline. 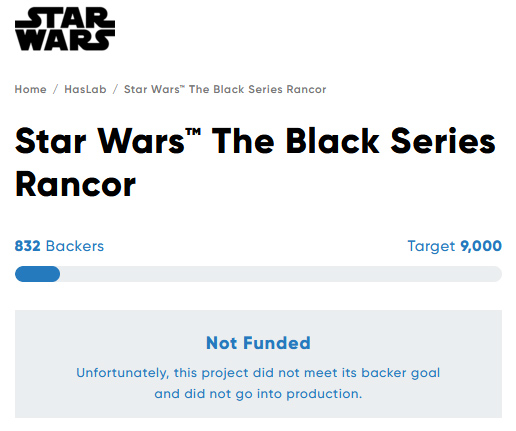 Well, at least Cookie Monster is not alone in toy heaven anymore and has someone to play with now!

Also, even though Hasbro will remove all traces of the Rancor from their HasLab site this will not be forgotten! And Hasbro better provide some good answers to tough questions! How can you mismanage your “bread and butter” line like that? We will have quite a few things to talk about in the next days! So stay tuned!