How Does The HasLab Rancor Compare To Other Options?

The HasLab Rancor is not the first (approximately) 6 inch scale Rancor on the market. Back in 2006 Gentle Giant released a Rancor + Malakili statue, Regal Robot made a Rancor replica as an extremely limited edition (only 83 Rancors were made) not too long ago and Sideshow Collectibles is offering their Rancor actually right now, estimated shipping date is December 2021. All of these Rancors are roughly the same size, something between 16-18 inches tall (without stand). For this article I want to compare the $350 HasLab Rancor to the $605 Sideshow Colletibles Rancor and the $2,999 Regal Robot replica of the original maquette from the movie. How does the HasLab Rancor fare? Click through for more! 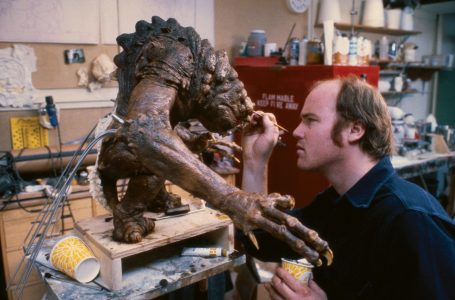 One more thing about the original Rancor. There are two versions of the monster. Phil Tippett created a maquette (pictured above) for reference purposes, but it was not used for filming. For filming they created a hand puppet that was operated by several people. There are color variations between the two, i.e. the Rancor maquette does not look the same as the puppet.

With that out of the way let’s take a look! How does the HasLab Rancor compare?

Let’s begin by looking at the beast from the front:

While it is difficult to judge color accuracy, because we don’t know what lights were used, what color temperature the lights had etc., it appears the Hasbro Rancor is much too dark, both the Regal Robot and Sideshow Collecibles Rancor seem to agree that the Rancor is much more light brown. Maybe both Sideshow Colletibles and Regal Robot used the puppet used for filming for color reference, whereas Hasbro maybe used the maquette. That could explain the stark color differences. Which asks the question what you prefer, the look of the monster as seen in the movie or the look of the maquette originally created for reference purposes?

Now a look at the backside of the beast:

If we assume that the $2,999 Regal Robot replica is the closest you can get to owning the original maquette then Sideshow Colletibles didn’t get the tail exactly right, it’s a bit too narrow. Hasbro’s overall sculpt is good, the tail seems to be a compromise between the very broad Regal Robot and the thinner Sideshow Collectibles tail. However, once again, the color scheme is very off and the articulation destroys the sculpt. Also, Regal Robot say on their website that they discovered the Rancor has a bone colored chitinous tail section when they examined the original maquette in the Lucasfilm archives. Neither Hasbro nor Sideshow Collectibles get that detail right, but then again, Regal Robot’s replica was a whopping $2,999, so you’d better expect perfection from them. That being said, the level of microdetail on the Sideshow Collectibles Rancor is impressive and the skin looks really good, many of the skin details look worse on the Hasbro Rancor.

A detailed look of the head:

Sideshow Collectibles didn’t include the drool, which is somewhat unfortunate, since this is a detail most will certainly remember. Here the Hasbro Rancor looks very much like a toy and the ugly neck articulation really destroys the overall aesthetics of the figure. Also, the Hasbro Rancor looks very plasticky, not at all like a creature, more like a Mattel dinosaur toy, whereas both Sideshow’s and Regal Robot’s Rancor looks like a living creature. The skin on the Sideshow and Regal Robot Rancor just looks much more like actual skin or hide.

And finally a side view:

Again, the Hasbro Rancor really looks like a toy here, it IS a toy, after all, whereas both Sideshow and Regal Robot’s Rancor once more look like something that is almost alive and much more like high end collectibles for adults. Hasbro said they would fix the toes with an additional wash, still, the feet look wrong, I suppose they made them bigger so the figure can better hold a pose and won’t fall over so easily when it holds a figure in its claws.

So what can we say after looking at the photos?

Hasbro’s Rancor has three major advantages. It is more affordable, even though $350 is not cheap to begin with. It would come with Malakili and potentially even with some more accessories (however, that looks unlikely, at the moment) and it is super articulated, meaning, you can recreate all kinds of poses, thus it can better interact with other figures. Simply put: it can hold figures, it can eat figures and it can fight other figures – something the statues cannot do.

It all boils down to this: Hasbro has moved into the Hot Toys / Sideshow Collectibles realm with their Rancor. But it still looks much more like a toy made for ages 4+ than a high end collectible / replica.

You do get super articulation , you do get at least one accessory, if you are lucky maybe even a few more, but in the looks department the Hasbro Rancor, in my opinion, disappoints on all fronts.

The question is: do you absolutely need super articulation? Or would you like to have a Rancor that looks, well, like the actual beast from the movie and not like a toy? And: do you have $255 extra lying around?

If I were looking for a Rancor to add to my display (disclaimer: I am not), I would prefer the Sideshow Colletibles statue, even if it’s missing the drool, the rest of the creature just looks so much better. It just looks a lot more impressive, more accurate and like a living, breathing creature and you can still pose 6 inch figures with it. This is a case where I feel super articulation does more damage than good, since it wrecks the overall aesthetics and gives the Hasbro Rancor this very toyetic look, the materials used don’t help either, with a weird combination of rubber and plastic and separate shoulder armor. This is a problem when you demand high end collectible prices. Because people begin to expect high end collectible quality and aesthetics. I feel many people would rather expect Sideshow Colletibles levels of quality here which is maybe one reason – apart from the lackluster tiers – the HasLab Rancor still only has 5,154 backers with 3 1/2 days to go.

What is your opinion here? Do you prioritize super articulation? Do you feel $605 is a huge step up from $350 or is it both just “high end”? Is spending $605 on a Rancor substantially different from spending $350 or does it feel about the same to you – expensive, but justifiable when you have the extra money?