Battle Of The HasLabs - Week 2

The Black Series Rancor HasLab was launched 9 days ago. One day after the Rancor the very first GI Joe HasLab followed. And while the GI Joe HasLab is quite different, it’s much cheaper, it may still be interesting to compare the two. So where is the Rancor after 9 days and how does it compare to the GI Joe Skystriker? Click through for more info! 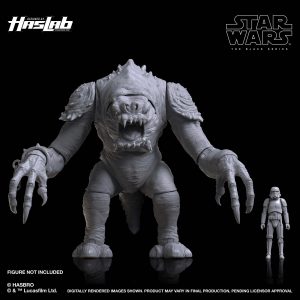 This is how things are after a little more than one week:

As you can see both HasLabs had a decent start, but things have slowed down a lot after the first weekend. This is expected however and nothing new. The Marvel Galactus Haslab had a similar dynamic, however, compared to the Rancor Galactus had more backers at this time.

Still, there is no reason to be concerned, this is very much expected. The backer count will slowly increase in the coming weeks, but not much will happen (unless maybe Hasbro decide to reveal some Rancor stretch goals after all). The final few days should see a huge influx of backers.

As you can see the Skystriker has quite a few more backers, but it’s also considerably more affordable. Also, the Skystriker HasLab has all of its tiers already revealed. For some reason the Star Wars team won’t or can’t reveal any of the tiers just yet. No matter the reason (Hasbro’s own decision or maybe something Disney/Lucasfilm mandates) it is odd not to reveal anything at all to give people some more incentive to back the Rancor that, should it have fewer than 11,000 backers, will have exactly zero accessories. Maybe it would have been wise to add at least one figure like Malakili or Oola right from the start, i.e. not as an unlock but as an accessory you are guaranteed to get to offer a bit more value.

The difference between the two was more than $300k only yesterday when I last looked, today on Sunday it’s already less than $300k. Even though the Skystriker costs $120 less than the Rancor. The Skystriker has 759 more backers, and this gap is widening with each day, slowly, but steadily.

I would not be surprised at all if the GI Joe HasLab will make more money than the Rancor. Even though the Skystriker is technically speaking something of a rerelease unlike the Rancor which has never been done before in the 1/12 scale by Hasbro.

Not much will happen in the next 30 days or so, the question is if the Rancor will be fully funded before the final week or not – or if Hasbro will try to give it a boost when they feel it’s underperforming. As things are now it is very likely that the Rancor will perform much worse than the Razor Crest. The Razor Crest was fully funded (6,000 backers were needed for that instead of the 9,000 Hasbro wants for the Rancor) after one day! And various stretch goals were unlocked well before the final week.

Predicting how much of a boost the Rancor will get in the final few days is difficult. The Razor Crest unlocked its 3rd stretch goal with 12 days to go. I don’t believe the same will happen here. Which doesn’t mean the Rancor may not unlock all tiers, but if the Rancor achieves this goal it will be much, much closer to the finish line. Similar to Galactus maybe, the Marvel HasLab more than doubled its number of backers in the final week, pushing it over 30k backers total, making it the most successful HasLab yet. Something quite a few people believed impossible after a very slow campaign before that. Some people even wondered if it may not unlock all tiers. However, Galactus was fully funded well before the final week. It’s not entirely certain the Rancor will achieve that, in fact, as things are now this seems pretty unlikely.  The Rancor HasLab would need to add 174 backers each day to become fully unlocked before the final week, i.e. in 29 days from now and that still wouldn’t unlock a single tier, meaning you would still have exactly zero accessories.
But much fewer people back the Rancor every day than is required for that. Maybe Hasbro overestimated the appeal of the Rancor with zero accessories and without showing people what the actual figure will look like with paint apps applied, even if it were just a render. So much of the appeal of the figure hinges on the paint apps and also on functionality, something that doesn’t really apply to spaceships. Many people may wonder if the Rancor will actually be able to hold a dynamic pose with those proportions, i.e. short tail, very long arms. Could the Rancor really hold a figure in its claws and hold that pose? I feel it would have been better to show off a 3d printed and hand painted prototype rather than a CGI render that doesn’t really tell you what the actual figure will look like.

Have you backed the Rancor and/or the Skystriker? Are you thinking about backing the Rancor? Are you waiting for Hasbro to reveal what the various stretch goals are to give you something of an incentive? Or are you not interested at all?