The Vintage Collection: The Ninety Six - RETURN OF THE JEDI Rebel Commando

Welcome to another entry in our The Vintage Collection: The Ninety Six column. Hasbro recently committed to collectors that they will be “focusing” on characters in The Vintage Collection that fall under “The Ninety Six” banner. If you’re new to this, it means that there needs a modern counterpart for every classic Kenner figure. Between 2020 and 2021, Hasbro’s made an admirable effort by focusing on these characters. But there is more work to be done, and we’ll figure out where we are step by step. Today we assess Rebel Commando. 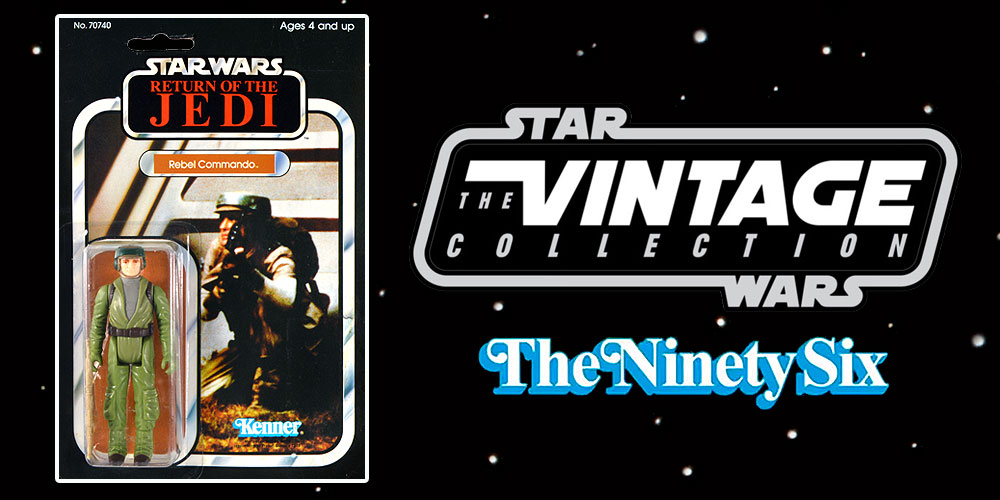 RETURN OF THE JEDI Rebel Commando

Is there a definitive modern counterpart to 1983’s ROTJ Rebel Commando?

The answer is yes and no. The Rebel Commando is a problematic figure to assess. While we’d love to check the figure off our lists since Hasbro already issued the character in THE VINTAGE COLLECTION line with the proper character photo, the action figure isn’t based on the 1983 ROTJ Rebel Commando Kenner figure. So, we technically don’t have a modern super-articulated version of the character in THE VINTAGE COLLECTION.

Does THE VINTAGE COLLECTION release completely satisfy the modern counterpart to 1983’s RETURN OF THE JEDI Rebel Commando figure?

As far as the card art is concerned, yes. But Hasbro would need to design a modern version of the Rebel Commando action figure wearing a solid green outfit and hard backpack to match 1983’s ROTJ Rebel Commando figure.

The last basic carded figure that came close to the 1983 ROT Rebel Commando is 1998’s THE POWER OF THE FORCE “2” [THE KENNER COLLECTION/FREEZE FRAME] Endor Rebel Soldier. But by today’s standards, that figure is sorely out of date. Unless they can salvage tooling from other figures, we suggest Hasbro develops an all-new Rebel Commando figure from the ground up.

What does Hasbro have to do so we can check off “Rebel Commando” from our Vintage Vs. Modern checklists?