GTP Toys - The Maker Of Space Walls - Files For Bankruptcy

Many of you will know GTP Toys, the maker of Space Walls, which is one of the most popular modular diorama sets used by toy photographers. When GTP Toys acquired the official Star Wars license many thought that GTP Toys had finally hit it big. With an official license GTP Toys could finally make official Star Wars diorama sets. And GTP toys did reveal the Tantive IV hallway with LEDs lighting up the wall panels. But then Covid caused several factory closures resulting in serious delays and on top of that extremely disappointing sales for the Tantive IV set put an end to all of it. GTP Toys no longer has the Star Wars license (the contract with Disney ended on September 30th). The owner has posted a long newsletter that explains the situation. And it reveals a few interesting facts about how it is to work for Disney as a Star Wars licensor. One might call it a cautionary tale. Click through for the full story! 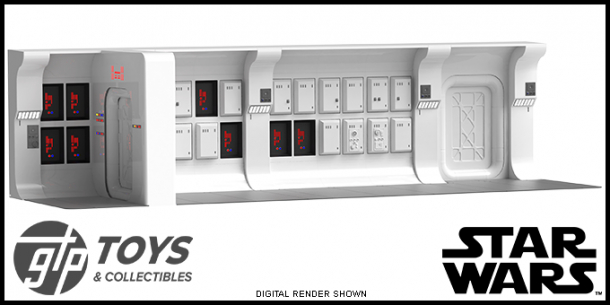 As soon as GTP Toys acquired the Star Wars license Disney mandated that GTP Toys can no longer use the old factories that made the original Space Walls, instead GTP Toys had to use a “Disney approved” factory. But that’s not all, Disney then prohibited GTP Toys from making their original Space Walls or even mentioning them. The original Space Walls were quite popular, not being able to make them anymore did certainly not make things any better for the company. To make matters even worse the new Disney approved factory wasn’t nearly as good as the old factories GTP Toys had used before. With travel restrictions imposed by Covid to sort out any quality issues this caused delays.

But what really put the nail in the coffin are extremely disappointing sales figures. The Tantive IV set needs a minimum order quantitiy of 2,500. GTP Toys had 490 (!) pre-orders.

One issue here may be that Disney severely restricted what GTP Toys can do. They wanted to make the Tantive IV hallway modular. Disney vetoed that idea. Disney did control many other things as well. Disney controlled what GTP Toys could say, post and what information could be shared, but most of all, they controlled how GTP Toys could make their sets and this includes prohibiting GTP Toys from making the very set that made them popular to begin with, the original Space Walls.

In the end more than $100,000 had been spent on tooling, but with such low pre-order numbers production is impossible. Several investors backed out and even though Disney did extend the contract, because of the Covid delays, that contract expired on September 30th and GTP Toys now has to file for bankruptcy.

However, this is not the end of the story. A new company will be founded and the set will get made, but with a few changes. First and foremost: the new set will now be modular! And then there will be a name change of course, the set will now be called “Spacewalls Princess Edition”. Everyone who placed a pre-order will get this new set eventually. And the original Space Walls will make a comeback as well!

One could say this a cautionary tale about working with Disney as an official licensor when you are a small company. But Covid certainly was a huge factor here too. Still, only 490 pre-orders are extremely disappointing. The question is if a modular set, as intended by GTP Toys and vetoed by Disney, would have sold significantly more.

And here is the newsletter in full, it’s a lengthy read but it includes several more details:

Let me bring you up to speed with what’s been going on this year.
It started with Covid (of course) and working with a new factory that is Disney approved.
This new factory wasn’t nearly as good as my other factories that I had been working with for the past decade and where I made the original spacewalls at. Being disney approved does not in any way mean the factory is better. So to work with an unknown/new factory and not be able to travel and check up on progress was a huge time killer. The factory was closed down 3 times for several months. Because of the huge amounts of money I spent on the Star was license, and the super low sales numbers, I have been stuck doing the best I can with the sales coming in. I really thought that having the Star Wars license would help with sales…… instead, it greatly limited me to what I could post, what information I could share, what I could say and how the sets were made.

On top of all these problems that were honestly out of my hands, there have been mistakes and problems of my own doing. Losing John took a lot of the wind from my sails, and I found the project overwhelming on my own. He did all the IG posting and responded to messages and emails. I hate it and I’m terrible at it, but that’s not an excuse for not doing what should have been done. There has also been no money to get any help. The investors we found that got the project rolling backed out part way thru and we found ourselves out of money overnight.

GTP sold about 4,500 original spacewalls sets worldwide, so of course I thought if I had the official license…. I could at least double that – wouldn’t you? …….. The TANITIVE IV sold about 490 sets.
I needed a minimum of 2500 sets to start production. All the money from sales has gone into tooling. I have taken a new job to stay afloat and GTP is being run out of my garage. It’s not a happy story I know. Disney was good enough to extend my contract because everyone is behind in manufacturing right now.
But that ended September 30th.
This is why I can now tell you what’s going on now.

I loved making toys and being part of the toy community. The very last thing I would ever want is for anyone to lose out. I have never had a project that didn’t make it to the hands of a customer.
Delays are hard and frustrating. I have been on both sides of it. As a customer you get scared and worried, and you really want to have the item you paid for.
As the “company” the stress of people wanting information that you can’t share and the stress of being behind schedule is nearly unbearable at times.
On top of the normal and even justified complaints, I have had Internet trolls who got the GTP facebook page shutdown twice, website hacked and got the site briefly shut down. The stress of these kind of attacks are soul crushing.

Even with all that, I am doing everything I can to salvage this project.

So, what does it mean for everyone now that GTP no longer has the star wars license……It means GTP TOYS will no longer be able to produce or sell the TANITIVE IV licensed sets and that we had to file for bankruptcy.

Now what? Do I accept the failure and loss, accept the embarrassment with my peers and just fade into obscurity…… OR do I find some people to help and with a new LLC to bring back the original SPACEWALLS line (that I have been prohibited in making under contract or even mention) and raise the money and sales needed to finish the Tantive sets ( 2000 sets )?

GTP has over $100k invested in just the tooling for the Tantive set. Only the big doorway and floor is unfinished. I have sacrificed too much and We have all come too far not to have the sets. Most of the tooling for parts are already built. It would be tragic to have gotten this far and not finish.

MOST importantly: What this means to all of you with an outstanding order with GTP ?
It means that you will receive (in time) a “Spacewalls Princess edition set” from a new company.
Its the TANITIVE set without licensing BUT the added benefit of being modular again (the biggest complaint I’ve had and something I was prohibited in making)
The downside is obviously that It’s going to take more time.

I know I have let you guys down, and from the IG comments some are very frustrated with the lack of communications and updates and some of you of you hate me.

I am sorry, all I ever wanted to do was to make awesome display sets for our Star Wars figures. I really tried to make something great for us.

I will be looking for someone to take over spacewalls to hopefully keep those available for you all.

May the force be with you always,
Michael
GTPTOYS
Copyright © 2021 GTPTOYS, All rights reserved.

Maybe we remember all of that next time we compain about Hasbro not forthcoming with things we want to know. It has been said many times before: Disney controls every single little detail about Star Wars toys. Including what you can say and what you are allowed to reveal and when to reveal it. And they even control how you make your Star Wars toys and what you can make to begin with. Let’s hope Michael will get back up on his feet again and that the new company will be a success story.