The Marvel HasLab Is Yet Another Huge Success!

The Black Series Rancor HasLab is about to be launched very soon and the general feeling among Star Wars collectors seems to amount to a mere shrug, it’s very much wait and see here. Meanwhile our dear Marvel friends have reason to celebrate today. Hasbro’s latest Marvel HasLab ended just moments ago. And it’s apparent that Marvel collectors have deep pockets and love their HasLabs. Galactus was off to a relatively modest start, only a week ago he had only about 14,000 backers. But as expected the past few days and hours gave Galactus a huge boost. In fact, Galactus has just become the most successful HasLab yet! Click through for more!

Nuked from orbit by Marvel’s Galactus

Previously, Marvel’s Sentinel was the most successful HasLab project with 21,887 backers, But then the Vintage Collection RazorCrest flew by and blasted the Sentinel to dust with an impressive 28,145 backers. But Marvel strikes back with Galactus and the giant figure just now surpassed the 30,000 mark with 30,691 backers (final backer count will probably be somewhat adjusted). 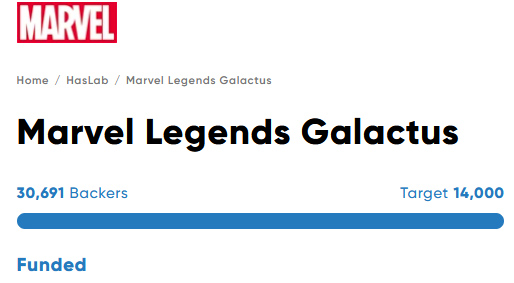 It seems by now collectors are more than well acquainted with HasLab and most people simply wait until the final days to make their pledge. Galactus more than doubled his backer count in the past week alone. Anyone who thought Galactus would limp over the finish line and that the stretch goals would not be unlocked was mistaken.

This proves two things: (Marvel) collectors have deep pockets. And collectors love HasLab. After the disappointing Cookie Monster and the shenanigans Hasbro had to resort to when Unicron was in danger of not getting fundet it seems Hasbro has made HasLab a resounding success.

In my opinion HasLab is somewhat of a poisoned chalice for collectors. A 5+ billion toy company should not need to resort to crowdfunding and collectors basically pay through the nose for figures or vehicles that certainly look impressive, but are also very much overpriced. None of the toys would sell for the recommended MSRP for very long at retail (and by retail I don’t necessarily mean brick & mortar but online) and Hasbro knows this. So they invented HasLab to guarantee people cannot wait for discounts any longer, effectively putting a stop to the normal rules of supply and demand. Now everyone has to pay full price, no matter what. Collectors get impressive, if extremely expensive toys, Hasbro gets a nice profit.

Now the big question is if the HasLab success story will continue with the Black Series Rancor and the recently launched Transformers Victory Saber. The Transformer is a modest $180 and only needs 11,000 backers. It will be interesting to see how much Hasbro will want for the Rancor and what their requirement for minimum backers will be.

Chances are Galactus will remain the reigning HasLab king for at least a while. And chances are HasLab will become more and more important for Hasbro, since collectors just love it and Hasbro even more so. Galactus alone generated more than $12,000,000 revenue, an impressive number for a single toy. Hasbro would need to sell a ton of Marvel Legends, TVC and Black Series figures to reach that number. More than half a million figures.

Have you backed Galactus? Will also back the Rancor? Do you focus just on one of the figures? Do you ignore both? Or do you grind your teeth because you happen to live in any of the 190+ countries on Earth that have no access to HasLab? Leave your thoughts in the comments!