The Vintage Collection: The Ninety Six - THE EMPIRE STRIKES BACK Imperial Commander

Welcome to another entry in our The Vintage Collection: The Ninety Six column. Hasbro recently committed to collectors that they will be “focusing” on characters in The Vintage Collection that fall under “The Ninety Six” banner. If you’re new to this, it means that there needs a modern counterpart for every classic Kenner figure. Between 2020 and 2021, Hasbro’s made an admirable effort by focusing on these characters. But there is more work to be done, and we’ll figure out where we are step by step. Today we assess Imperial Commander. 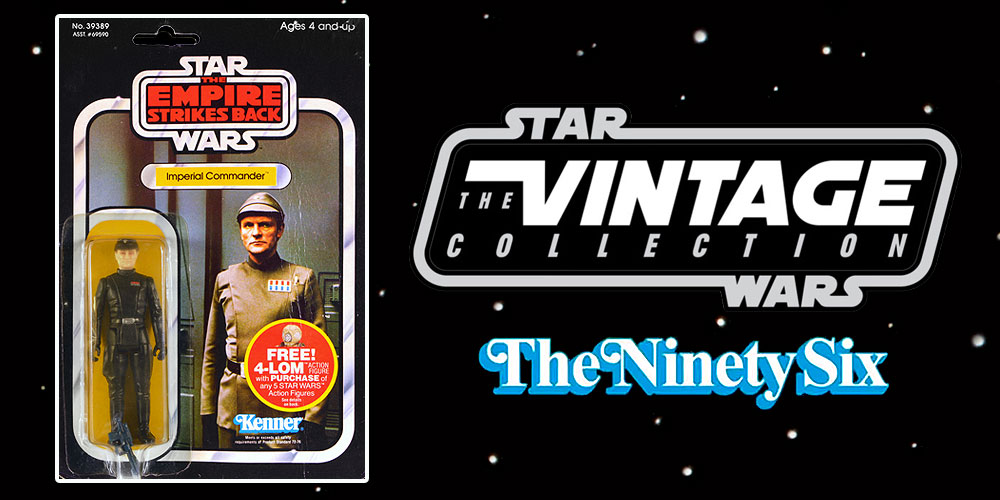 THE EMPIRE STRIKES BACK Imperial Commander

Is there a definitive modern counterpart to 1981’s ESB Imperial Commander?

There is a GREAT DEBATE on which figure collectors generally regard as the closest placeholder. Strap yourselves in for this ride.

As you know, we assess modern counterparts by FIGURE FIRST, CHARACTER PHOTO second. So, if we look at the character photo, one could state that Hasbro created General Maximillian Veers but messed up the color of the uniform (by making it black) and gave the figure a slightly different ranking badge (evidenced by no blue paint). Regardless, some will argue that it’s wholly inaccurate to look at the 1981 ESB Imperial Commander figure as General Veers. We tend to disagree.

However, to play devil’s advocate, if we look at the figure strictly as is (a black uniform), this poses another problem and essentially rules out any chance that this is intended to be a black-uniformed Imperial officer from Episode V. The only black-uniformed Imperial officers in THE EMPIRE STRIKES BACK are exclusively Navy crewmen (not officers). However, looking at the 1981 Kenner figure, the ranking badge makes this possibility impossible (to be a Navy crewman). Therefore, it’s safest to claim that the 1981 Kenner figure should be a gray-oufitted Imperial officer.

Does THE VINTAGE COLLECTION release completely satisfy the modern counterpart to 1981’s THE EMPIRE STRIKES BACK Imperial Commander figure?

We’re still waiting for Hasbro to add this figure into THE VINTAGE COLLECTION.

Yes and no. If 1981’s ESB Imperial Commander is meant to be an Imperial officer from THE EMPIRE STRIKES BACK, General Veers is the safest character to pick since the character photo matches. However, it could also represent many other Imperial officers seen in THE EMPIRE STRIKES BACK. That said, while 2006’s THE SAGA COLLECTION General Veers (SAGA 007) figure is an excellent action figure, it lacks sorely in articulation. 2009’s THE LEGACY COLLECTION Captain Needa (BD 40) is a decent super-articulated action figure. Hasbro could switch out the ranking badge and give it a new head sculpt, and then we’d have a passable modern counterpart to the 1981 ESB Imperial Commander action figure. Even still, many collectors feel that tooling is outdated. Whatever Hasbro does, we hope they use the tooling of THE SAGA COLLECTION’s General Veers (SAGA 007) head sculpt, give it Photo Real, and add it to whatever new General Veers figure they make. That head sculpt is perfection.

What does Hasbro have to do so we can check off “Imperial Commander” from our Vintage Vs. Modern checklists?

Hasbro needs to do “something” at this point. We need this figure in THE VINTAGE COLLECTION. They used 2009’s TLC Captain Needa (BD 40) for the Special Action Figure Set Target exclusive release. And they should NOT follow suit for a basic carded release.

Next Article: The Vintage Collection: The Ninety Six - THE EMPIRE STRIKES BACK 2-1B