Previewed during Sideshow Con, here’s the official announcement for the Return of the Jedi Scout Trooper Sixth Scale figure. Click through for full details and gallery images. 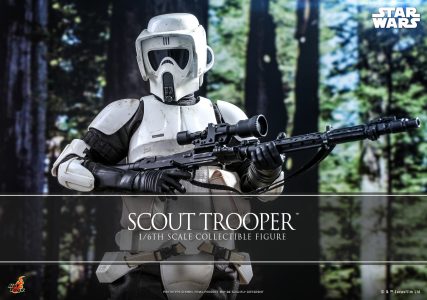 Imperial Scout TroopersTM are lightly armored compared to other stormtroopers, which allows them to move more quickly and easily in a range of environments. They are also trained for more independence and adaptability than most Imperial troops.

Today, Hot Toys is delighted to introduce fans of the Imperial troopers to the new 1/6th scale Scout Trooper collectible figure based on Star Wars: Return of the JediTM!

The highly-accurate collectible figure is skillfully crafted based on the appearance of the Scout Trooper as seen in the thrilling sequences from Star Wars: Return of the Jedi. It features a newly developed helmet and armor with weathering effects, a finely tailored fabric body suit, a blaster pistol, a blaster rifle, and a themed display stand!

Fans of the original Star Wars trilogy shouldn’t miss out on having this trooper in your collection.