Is Hasbro Losing Its Way With The Black Series?

The Black Series was launched in 2013 and was originally meant to be the definitive action figure version of beloved Star Wars characters. A lot has happened since then, so where is the line now, in 2021? The general feeling among many collectors is that exclusives are taking over and that repaints or kitbashes dominate the line now. But is any of that true? So I looked at the numbers to see how they really add up. Click through for an overview of the Black Series in 2021 and let’s have a discussion about whether or not Hasbro has taken a wrong turn. 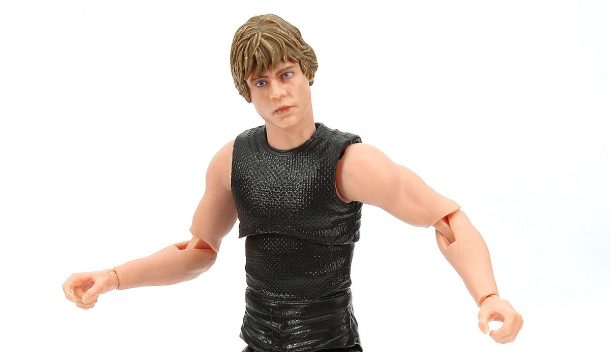 The year is not over yet, so more figures will come, but as of now, late July 2021, 64 figures have been released or are about to be released. Some of them come in multipacks (Obi-Wan, Evazan and Ponda Baba), most are single releases.

Let’s look at the numbers in detail. How many of those figures are new, as in all new parts, how many are kitbashes and how many are straight rereleases? For this I consider all 6 inch Star Wars figures, including archive releases and the 50th anniversary line. 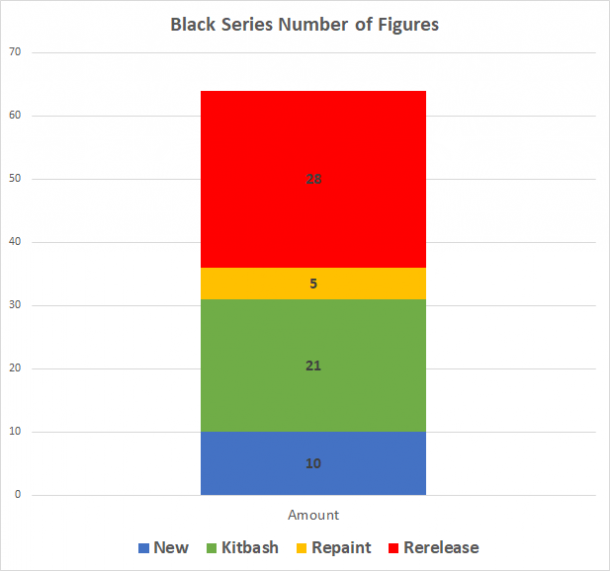 As you can see only 10 figures are actually “new”, as in, they don’t reuse any parts from a previous figure. Most releases in 2021 are either straight rereleases (which almost always means it’s also a repaint / photoreal update) or kitbashes that use parts from different figures with only few new parts. I consider figures that have a new name but are otherwise identical to a previously released figure a repaint (clones are a prime example here).

Let’s look at percentages to get a better feeling for the numbers: 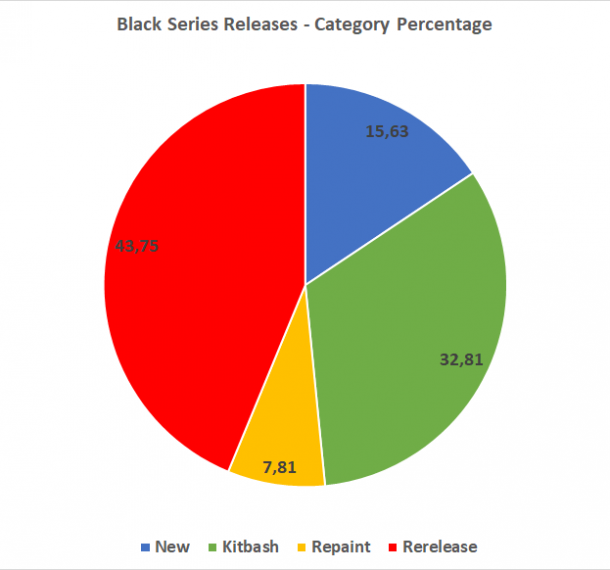 Due to the very high number of archive and 50th anniversary releases this year they absolutely dominate. Almost 44% of all Black Series figures so far have been rereleases, which almost always also means they are (photoreal) repaints.

So let’s look at how the various Black Series sub lines add up, as in, how many archive, 50th Anniversary or regular releases are there? While all archive releases are also labeled “50th anniversary” figures this year, I count them as a separate line, because of the archive packaging. 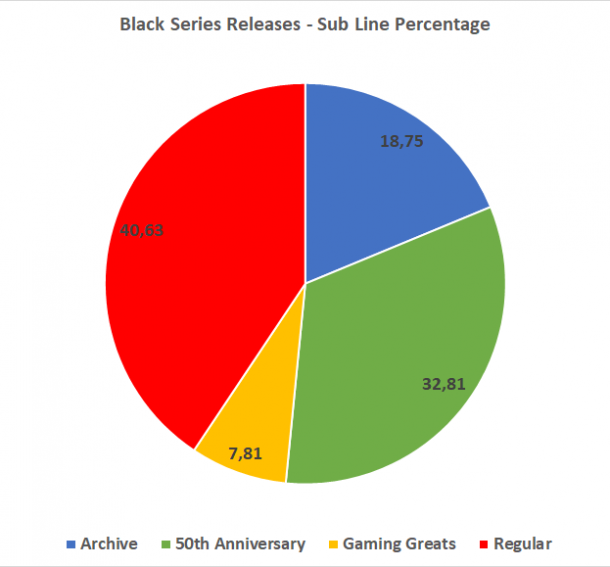 Another impression many people have is that exclusives have become very numerous. This impression is correct. Let’s look at the percentage of exclusives vs. non-exclusives: 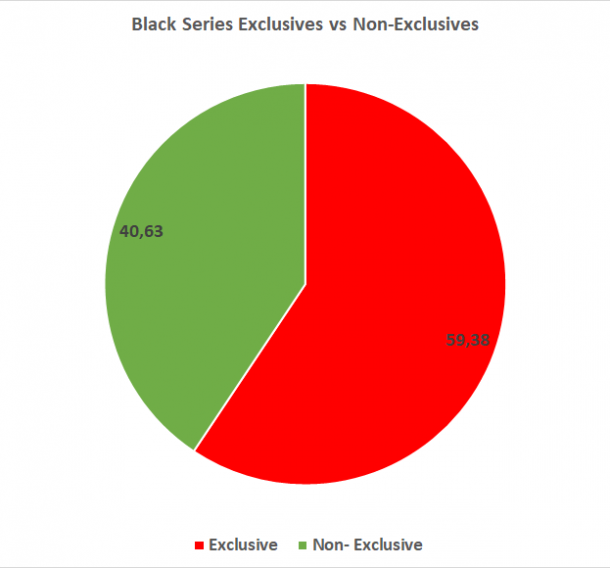 59% of all figures released so far (or soon to be released) are exclusives. Only 40% are available everywhere (in theory).

So what can we say? We can say that Hasbro has drastically reduced the number of actual new figures in The Black Series, we can also say that rereleases, repaints and kitbashes have become the norm and that actual new figures that don’t reuse parts have become an exception. The regular Black Series figure also has become somewhat of an exception with archive or commemorative releases dominating 6 inch figures.

It’s also amazing to see how many exclusives the line has in 2021. Back in 2018 exclusives accounted for roughly 34% of all figures releases thus far (2013-2018). Three years later Hasbro has drastically dialed up the number of exclusives.

In my opinion Hasbro is on a dangerous path here. While exclusives are a very important part of the business model and while both toy companies and retailers LOVE exclusives, collectors do not. Not at all. It might very well be that things are out of balance here. And the alarmingly low number of actual new releases vs some kind of reuse (most of the time straight repaint/repack) tells me that Hasbro must have drastically reduced their budget for the line.

My theory is that following the very difficult years following The Last Jedi and Solo Hasbro managers decided to make up for rapidly decreasing sales by cutting the budget and thus increasing the margins. Which makes sense when you are a business. Make fewer new figures, kitbash and rerelease/repaint whenever possible.

But things have turned around since then, The Mandalorian gave Star Wars toys a huge boost again in 2020, with 70% increased sales, and so far 2021 has seen more growth. But why would Hasbro change their strategy now? When people still buy all the stuff, even if it’s just Malibu Stacy with a new hat most of the time, there’s no reason to invest in more new tooling again to create all new and screen accurate Star Wars action figures. No, just rerelease the mostly bad looking Rogue One figures all over again with a new coat of paint to make them look actually pretty this time… and call it a day.

The question is for how long collectors will swallow these pills. But of course we are just a minority, it may very well be that the average person who buys a figure here or there does not care about rereleases, kitbashes or screen inaccurate figures at all.

I feel The Black Series has lost its original purpose. To give us a definitive version of a character. Instead Hasbro cuts corners now everywhere they can. So much so that even a figure that would always sell in very high numbers, the Beskar Mandalorian, is merely a kitbashed figure, screen inaccurate. This is not what the Black Series is meant to be.

But chances are most people don’t care about these details and that how things are now is also how things will be in the future. The Black Series has turned into Marvel Legends where reuse is the norm.

Next Article: Walmart Exclusive TBS Clone Wars Mace Windu Back Up For Pre-Order