I get that the recently revealed Genndy Tartakovsky Clone Wars action figures for The Vintage Collection are getting a mixed reception from collectors. Still, for me, this is some of the most exciting news in recent memory as a Star Wars collector, and that’s with me accepting they’re imperfect. (more….) 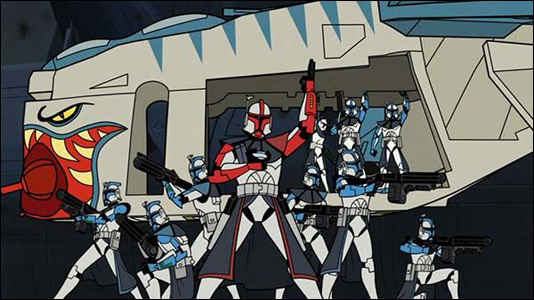 There were very few original Expanded Universe sources that interested me. Granted, there were only a few major multimedia events throughout the Original Trilogy and Prequel Trilogy. But one, Genndy Tartakovsky’s Clone Wars served as a springboard for Star Wars Episode III: Revenge Of The Sith and introduced us to colorful versions of established and new characters in ways we hadn’t seen previously.

Genndy Tartakovsky’s vision for the Clone Wars was flawless and as painful as it was only to have a micro-series of his work realized in two-dimensional animation, sometimes less is more, and I’ve discovered that time has made these shortest grow into the finest of all Star Wars “wines.”

The shorts have zero silly dialogue, perfectly placed comic relief without derailing any of the stories, and various storylines that visually (and not via dialogue) how all of our favorite heroes, villains, and new characters made their way through the galaxy. Some of the shorts were idealistic interpretations and showed some characters in some impossible scenarios, yet it didn’t take away from the story and provided entertainment.

Let’s not forget how Genndy Tartakovsky’s brought us some of the greatest Star Wars characters ever designed. It’s the first Star Wars source to bring us Asajj Ventress, General Grievous, and provide us a believable explanation why Anakin’s “tattoos” disappeared in time for Episode III. We also discovered how C-3PO got his shiny gold armor, how Luminara Unduli trained Barriss Offee, and where they got the kyber crystal for lightsabers. These, of course, are only a few of the highlights of this excellent series.

Then there are the fabulous toys produced by Hasbro. They gave us multiple waves of the animated Clone Wars line. They gave us a host of characters and vehicles from the realistically-styled Clone Wars line. Hasbro worked in a few conceptual multipacks during the Revenge Of The Sith line, The Saga Collection line, and the 30 (77-07) line before tying things up nicely with a bow with the final wave of Tartakovsky-focused basic figures in the second wave of The Legacy Collection.

Aside from a few obscure releases here and there, including 2011’s The Vintage Collection ARC Trooper Commander (VC54) figure, almost nothing was released based on the incredible Star Wars source.

Then yesterday happened. I still can barely process it. I agree that many of these figures announced are far from perfect. But it would be disingenuous of me to criticize them as I am quite happy that there is a whole wave of “new” Star Wars figures based on Genndy Tartakovskys’ Clone Wars for The Vintage Collection. Again, I think I need to be pinched. I thought this series was dead and buried. And it felt like Disney Star Wars was more than happy to see it die.

I hope there is enough excitement for this series of Walmart exclusives that Hasbro feels their success warrants more action figure releases. It would be a shame if this were our only bite at this apple. It seems that we could use a general marketplace wave of these characters. Perhaps add some great characters from the past like K’Kruhk and General Grievous in these revised colors. There are a ton of other figures that could use a refresh, re-release, or all-new sculpt as well.

And if you want a bit of trivia, years ago, Hasbro was asked by the collecting community about what character from Genndy Tartakovsky’s Clone Wars they were most upset about not producing for the 3.75-inch action figure; they conceded it was the Nelvaan Warrior. So, I hope the current Hasbro Star Wars team is paying attention and somehow work in that character into The Vintage Collection at some point.

Check out all of the excellent Star Wars toys Hasbro and other licensees produced based on Genndy Tartakovsky’s Clone War micro-series. They’re some of the best characters ever produced! I truly hope we see more The Vintage Collection action figures produced from this series and that this isn’t a one-time offering.