Hasbro accidentally revealed what the upcoming Black Series HasLab is going to be: a Rancor. Now the big question is: is a Rancor all that exciting or actually kind of underwhelming? All the previous Star Wars and Marvel HasLab items impressed with their sheer size, how does the Rancor fit in here? So let’s look at the sizes of a few HasLab items to see how a Black Series Rancor would compare!

Update: after yesterday’s slip up Hasbro has now officially confirmed that the Rancor will indeed be the next Star Wars HasLab! The official Star Wars site has the announcement! And Patrick may get no dessert for the next month or so.

Rancor in Return of the Jedi

Let’s look how the Rancor would compare: 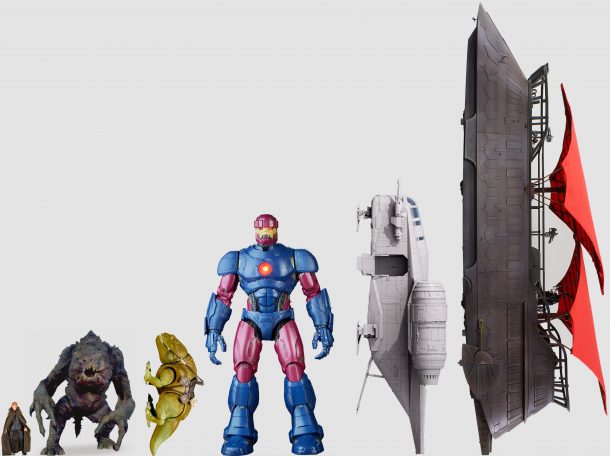 The Marvel Sentinel was $350, the Khetanna was $500, the Razor Crest was $350. If Hasbro actually wants $300 for a HasLab Rancor (Paul mentioned that price in the comments yesterday) then I think Hasbro seriously miscalculated things and is offering Star Wars fans a very bad deal. $100 sounds more like a fair price, maybe $150 if Hasbro goes all in with paint apps and accessories. Just look at the $60 Dewback in comparison. Yes, the Rancor is more massive, and a Rancor will have more complicated paint apps, and will probably have a few more accessories / stretch goals, but the fact that a Dewback was a regular release for $60 and a Rancor whose overall height/length is about the same (just more bulkier) is relegated to being a HasLab item for a potential $300 is mind-boggling.

So if the Rancor is really $300… even if it came with the Rancor Keeper, Oola, a few accessories like a bone and maybe a half eaten Gamorrean Guard and yet another Luke Skywalker it would still be a bad deal, in my opinion. Size certainly does matter and the Rancor is just underwhelming in that regard compared to other HasLab items, it doesn’t even reach the hips of a Marvel Sentinel. And even if it comes with part of the cave and the gate as a diorama piece it’s still not that visually exciting, when compared to the two TVC vehicles.

On the plus side, if you consider a smaller size to be a plus, the HasLab Rancor would fit inside an IKEA Detolf cabinet and is certainly an item that doesn’t require you to think about a place to display it, unlike the massive Khetanna.

In my opinion Hasbro is offering Black Series collectors not the most exciting HasLab. A Millennium Falcon cockpit with lights and electronics could have been nice. A Jabba’s Palace diorama / playset would have been even nicer, or a Cantina (which was nullified by the recent Pulse Con exclusive reveal) or maybe even a Lars Homestead playset, but a Rancor is, especially compared with other HasLabs, quite boring and small. Also, Hasbro won’t be able to sell too many other figures with a Rancor, something that Jabba’s Palace would have achieved. Hasbro could have offered two configurations, with or without a throne so the palace could have doubled as both a Return of a Jedi or a Book of Boba Fett diorama.

If the Rancor really is $300 Hasbro has to offer the most exciting stretch goals ever. If not… then I feel the Rancor may not be the success Hasbro needs and wants it to be. The Razor Crest was backed by almost 29,000 collectors. I seriously doubt the Rancor will even come close, not even remotely. Some may blame it on being a Black Series item, but in fact it’s just not all that exciting, no matter the scale.

Also, I feel a 35 cm (13.78 inches) Rancor could have been a regular/exclusive release and doesn’t need to be a HasLab item. When we talk about sheer size then the Black Series Dewback is absolutely comparable. And that was sold for $60 and it came with a figure. Hasbro should have went back to the drawing board when they reactivated the Black Series HasLab campaign and offer fans something a lot more exciting. I don’t think a Rancor will be as much of a failure as the Cookie Monster, but I still feel it will be a massive letdown.

What are your thoughts and feelings here? Are you looking forward to the Rancor, even for an alleged $300, or will you skip it and spend your money on something else?