The Vintage Collection: A Line Ran With Ineptitude And Benightedness

Are any other The Vintage Collection collectors growing weary of the current Hasbro team’s complete ineptitude for the line? (more….) 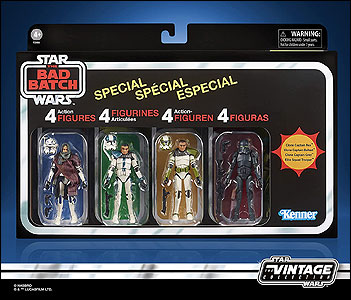 No one should be surprised that Amazon would be taking more pre-orders for The Bad Batch four-pack in 2022. But how come Hasbro didn’t plan this exclusive better? How did they not have any idea how popular this set would become after its announcement? Does its nearly-instant sell-out provide evidence for Hasbro that there is an unquenchable desire for super-articulated 3.75-inch action figures?

Look, I don’t give two craps about The Bad Batch or the action figures contained inside of this set. Regardless, I knew that Hasbro should have had about 15,000 to 20,000 units ready to pre-order. (They didn’t have nearly enough.) What do The Vintage Collection collectors need to prove before Hasbro acts and treats the line as it deserves to be treated?

Luke Skywalker (Jedi Knight Outfit) STILL isn’t available to pre-order because Hasbro hasn’t green-lit another production run. Have you searched Amazon recently for some of the latest TVC 2.0 action figures and seen their aftermarket values? I mean, some of the worst figures they produced are upwards of $40, $50, $60, and $200. What gives?

Hasbro could literally produce another dozen sets like the one pictured above, and they’d continually sell out one by one because there is a huge desire for The Clone Wars era action figures. And imagine if Hasbro created skiff guard and Jabba’s Palace aliens sets like this and even Chalmun’s Cantina sets? We’d all be skipping around our omes in elation for the wonderful products they’re producing.

But no. What do we get instead? It’s a crapshoot to place an order successfully for all-new and highly-desired action figures (like the multipack above). The figures arrive DESTROYED from online retailers. Sorry, Walmart, but you did an egregious disservice to your collectors’ market with the latest Lucasfilm 50th Anniversary The Vintage Collection figures. I can’t wait for round two in a couple of months!

No matter your stance on the 3.75-inch super-articulated The Vintage Collection line, things are not right here. Although I must admit, I see a closer 1:1 ratio of releases recently. Could Hasbro have listened to our suggestion to test the waters on this theory? If you recall, we posted a scathing article to Hasbro that until they produce a TVC figure for every TBS6 figure, there is no way to gauge what line is more successful. It’s an unfair playing field. We’re not there yet at 100%, but the playing field is getting a little fairer as of late. I digress.

The Vintage Collection collectors thrive on the momentum of constant announcements and product releases. Sorry, Hasbro. We need constant engagement and need to know you’re in our court. You don’t produce nearly enough figures for the line, and that has to change.

Please hire a small team of employees to do market research on what The Vintage Collection figures are exploding the aftermarket. And get them out again to the public. (I’m talking about all products since the relaunch of the line). The original TVC line is a whole other story. You’ll have to do separate research on that.

Let’s get The Vintage Collection in motion again. You can’t make this line succeed by dropping breadcrumbs. It would help if you dumped a crane of bread on us at once, and we’ll take it like champions.

Previous Article: JTA Wishes You A Happy Fourth Of July!