Welcome to another entry in our The Vintage Collection: The Ninety Six column. Hasbro recently committed to collectors that they will be “focusing” on characters in The Vintage Collection that fall under “The Ninety Six” banner. If you’re new to this, it means that there needs a modern counterpart for every classic Kenner figure. Between 2020 and 2021, Hasbro’s made an admirable effort by focusing on these characters. But there is more work to be done, and we’ll figure out where we are step by step. Today we assess Power Droid. 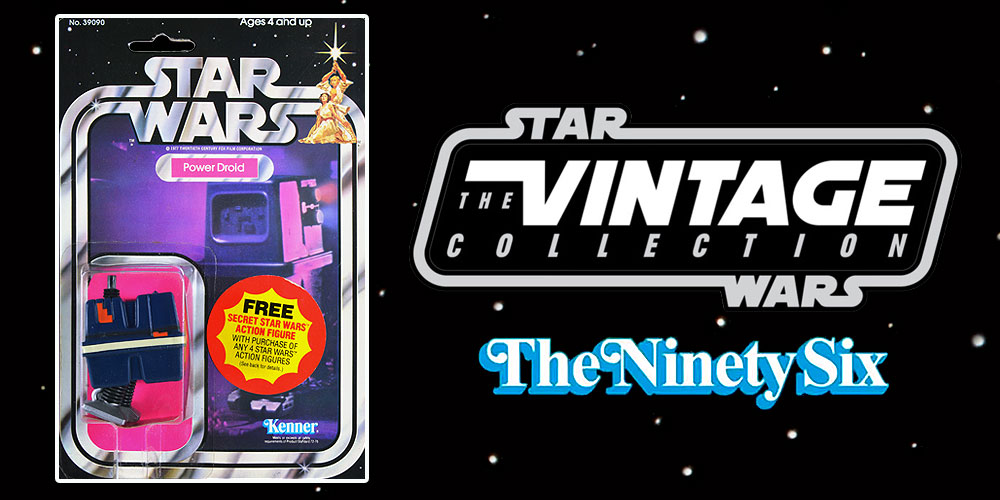 Is there a definitive modern counterpart to 1979’s SW Power Droid?

99.9% yes and 0.1% no. The earliest STAR WARS figures cause a great deal of consternation with modern Star Wars collectors and fans. Things get muddled whenever Hasbro creates figures that they deem the modern counterparts of these early Kenner figures. Because our rule is “figure first” then “card art second,” we must concede that the 1979 STAR WARS Power Droid is faithfully represented by the 2020 THE VINTAGE COLLECTION Power Droid (VC167) figure.

The navy blue color of the Lars homestead GNK droid and its white “belt” best match the 2020 TVC figure. There is another GNK droid in STAR WARS with a “face” that better matches the 1979 SW Power Droid, but overall, the Lars homestead droid is the closest match to the Kenner figure. The color of the Mos Eisley droid is a seafoam green color and doesn’t match the body of the navy blue found on both the original 1979 STAR WARS figure and the 2020 THE VINTAGE COLLECTION figure. So, we don’t think it’s a better match to the Kenner figure. As far as the character shown on the card art is concerned, that’s another GNK droid altogether. We received that particular Power Droid in 1999 as part of THE POWER OF THE FORCE “2” [FLASHBACK/COMMTECH] Jawa And “Gonk” Droid two-pack. It’s a solid dark gray droid.

We’re certain that collectors would welcome the unidentified GNK droid seen in STAR WARS on the streets of Mos Eisley in THE VINTAGE COLLECTION too. Hasbro designed an excellent base Power Droid figure (whose tooling dates back to 2012), and they should reuse its tooling as often as possible.

What does Hasbro have to do so we can check off “Power Droid” from our Vintage Vs. Modern checklists?

We feel Hasbro has already done its part. The Power Droid is done as far as we’re concerned.