Welcome to another entry in our The Vintage Collection: The Ninety Six column. Hasbro recently committed to collectors that they will be “focusing” on characters in The Vintage Collection that fall under “The Ninety Six” banner. If you’re new to this, it means that there needs a modern counterpart for every classic Kenner figure. Between 2020 and 2021, Hasbro’s made an admirable effort by focusing on these characters. But there is more work to be done, and we’ll figure out where we are step by step. Today we assess Death Star Droid. 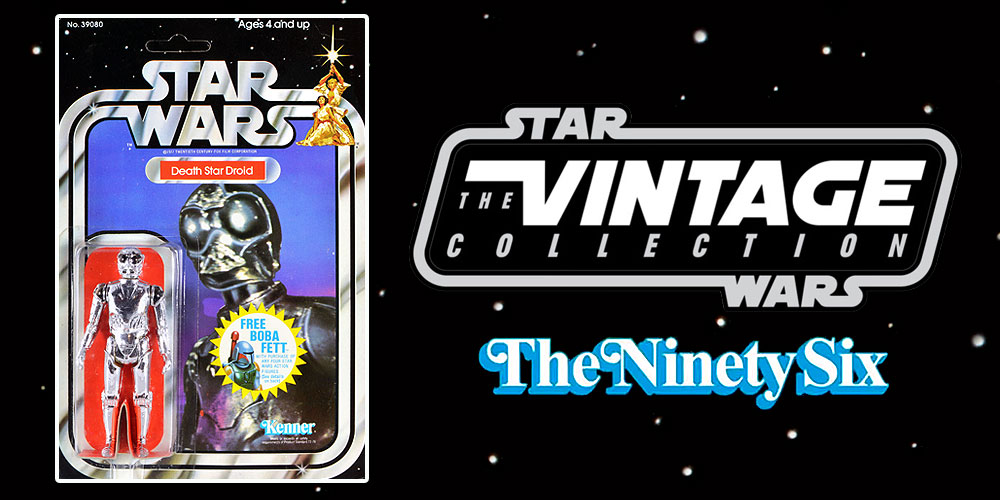 Is there a definitive modern counterpart to 1979’s SW Death Star Droid?

Yes. Hasbro released 2021’s THE VINTAGE COLLECTION Death Star Droid (VC197) figure as a Walmart exclusive as part of the Lucasfilm 50th Anniversary sub-line of Star Wars action figures. It is a repaint of 2008’s THE LEGACY COLLECTION MB-RA-7 Build A Droid figure.

No, unfortunately. Hasbro made the HUGE mistake of recreating MB-RA-7, a recreation of the vintage Kenner figure AND NOT the on-screen 3B6-RA-7 droid seen in the Jawa’s Sandcrawler in A NEW HOPE. Hasbro noted they found the shiniest silver paint in their palette to decorate the droid, but it doesn’t accurately reflect the character seen on the card art. Besides, most collectors won’t be happy until Hasbro uses vac-metalization on this character. Hasbro would need to recreate 3B6-RA-7 before this figure counts as truly definitive. Hasbro is essentially releasing a character that doesn’t exist in the STAR WARS films but only exists as an action figure.

Sadly, the Disney Parks 2017 Collection Droid Factory line has a stunning RA-7 droid action figure sculpt that Hasbro should have borrowed for THE VINTAGE COLLECTION. However, they decided to go with an inferior 2008 TLC MB-RA-7 Build A Droid action figure instead, which has limited articulation and can barely stand unassisted. This is the second time they’re releasing this Death Star Droid in THE VINTAGE COLLECTION. The first version was part of the 2012 TVC Droid Set Special Action Figure Set.

What does Hasbro have to do so we can check off “Death Star Droid” from our Vintage Vs. Modern checklists?

Hasbro needs to give an upgraded RA-7 sculpt a vac-metalized paint job that looks like 3B6-RA-7 and place it on a vintage Kenner card. Heck, we’ll take 5D6-RA-7 at this point. But, for the time being, we have a definitive modern counterpart with the 2021 THE VINTAGE COLLECTION release, much to our chagrin.

Previous Article: Walmart Marking Down Some of Their 2020 Exclusives