Welcome to another entry in our The Vintage Collection: The Ninety Six column. Hasbro recently committed to collectors that they will be “focusing” on characters in The Vintage Collection that fall under “The Ninety Six” banner. If you’re new to this, it means that there needs a modern counterpart for every classic Kenner figure. Between 2020 and 2021, Hasbro’s made an admirable effort by focusing on these characters. But there is more work to be done, and we’ll figure out where we are step by step. Today we assess Snaggletooth. 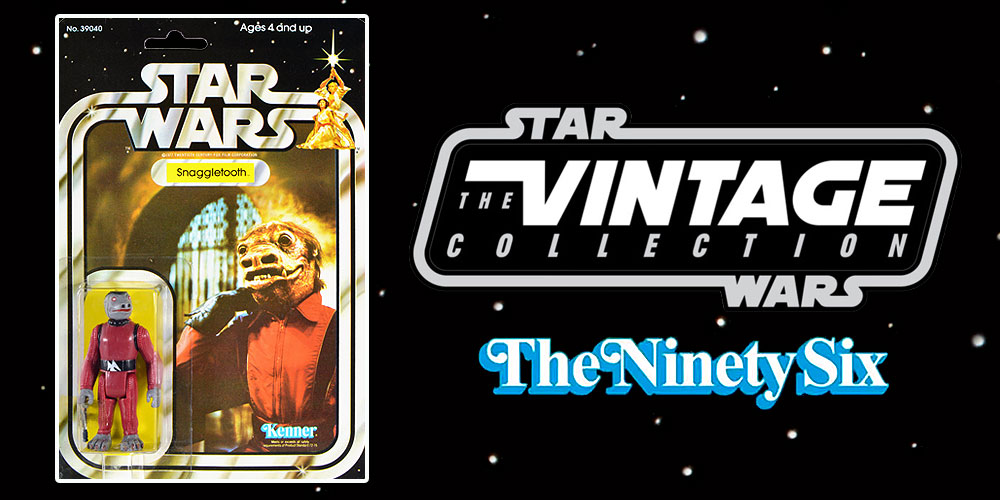 Is there a definitive modern counterpart to 1979’s SW Snaggletooth?

Yes and No. If you accept 2021’s THE VINTAGE COLLECTION Zutton (VC189) as the modern counterpart to 1979’s SW Snaggletooth, then yes. You generally accept they updated the card art to reflect the on-screen character as they did for the Ponda Baba (Walrus Man) (VC70) figure. If you still regard Zutmore from THE STAR WARS HOLIDAY SPECIAL as the modern counterpart to the 1979 figure, then you are still waiting for this character to be released in THE VINTAGE COLLECTION. If the line ended tomorrow, Zutton would still serve as an acceptable modern update.

It depends upon your point of view. The 1979 SW Snaggletooth is an amalgamation of Zutmore from THE STAR WARS HOLIDAY SPECIAL and the character we see in Chalmun’s Cantina in A NEW HOPE. Snaggletooth with Zutmore qualities is no different from Greedo with a green ribbed jumpsuit, Hammerhead with a turquoise blue shell, or Walrus Man with blue arms and legs and black flippers. Hasbro already set a precedent that the 2021 THE VINTAGE COLLECTION Zutton (VC189) figure is the modern counterpart since they released this figure as “Snaggletooth” in 2012’s THE VINTAGE COLLECTION Villain Set [Version 2] Special Action Figure Set Target exclusive.

Until Hasbro creates a new Zutmore action figure and releases it in THE VINTAGE COLLECTION, we’ll never officially know. But there is no reason that the current THE VINTAGE COLLECTION Zutton (VC189) doesn’t meet your needs as a modern counterpart to 1979’s SW Snaggletooth figure, even due to its inaccuracies. For example, the vintage Kenner Snaggletooth has furry hands. The on-screen Zutmore (from TSWHS) does not. But the on-screen Zutton (from ANH) does. The Kenner Snaggletooth figure has Zutton’s head sculpt (NOT Zutmore’s). It can get very confusing if you allow it.

What does Hasbro have to do so we can check off “Snaggletooth” from our Vintage Vs. Modern checklists?

We feel Hasbro has already done its part. Snaggletooth is done. If Hasbro decides to release Zutmore, we can revisit the conversation about its release in THE VINTAGE COLLECTION then.

Previous Article: What Is The Best Expression Hasbro Should Capture With TVC's Bib Fortuna?

Next Article: Six TVC Announcements That Will Guarantee A Positive Reception From Collectors At The Next Collector Event Online