Welcome to another entry in our The Vintage Collection: The Ninety Six column. Hasbro recently made a commitment to collectors that they will be “focusing” on characters in The Vintage Collection that fall under “The Ninety Six” banner. If you’re new to this, it means that for every classic Kenner figure, there needs a modern counterpart. Between 2020 and 2021, Hasbro’s made an admirable effort by focusing on these characters. But there is more work to be done, and we’ll figure out where we are step by step. 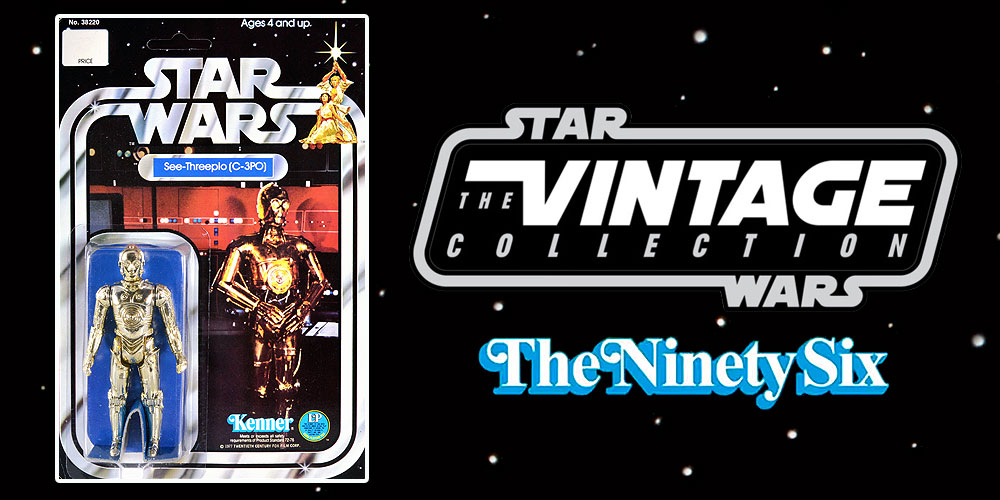 Is there a definitive modern counterpart to 1978’s SW See-Threepio (C-3PO) figure?

2010’s THE VINTAGE COLLECTION See-Threepio (C-3PO) (VC06) is regarded as the closest placeholder.

We’re still waiting for Hasbro to add this figure into THE VINTAGE COLLECTION on a STAR WARS card. But things become very complicated when determining if we have an action figure that meets definitive status. The VOTC figure is vac-metalized but comes with only four points of articulation. The VC06 figure is super-articulated but comes with features specific to the Prequel Trilogy. It’s also not vac-metalized. Many feel 2006’s THE SAGA COLLECTION C-3PO (With Ewok Throne) (SAGA 042) figure would be the best choice to pack on a STAR WARS card, but others think it still lacks in articulation. The best choice might be to repaint 2009’s THE LEGACY COLLECTION U-3PO Build A Droid figure and repaint it in gold and place it on a STAR WARS card.

At this point, an all-new figure from the ground up is the best way to approach this action figure. Hasbro should get the necessary permission and approval to exceptionally produce a C-3PO figure with vac-metalization exclusively for THE VINTAGE COLLECTION. If not, we suggest the 2009 THE LEGACY COLLECTION U-3PO Build A Droid figure repaint idea.

What does Hasbro have to do so we can check off “See-Threepio (C-3PO)” from our Vintage Vs. Modern checklists?

They need to tool an all-new action figure of See-Threepio (C-3PO) and place it on a STAR WARS card. Interestingly, they never deviated from THE EMPIRE STRIKES BACK card art.