The Vintage Collection Gaming Greats sub-line was perhaps the best announcement from the Hasbro Pulse Fan Fest presentation last Friday. And I am one who is eager to purchase them all. One thing is bothering me about them, however. (more….) 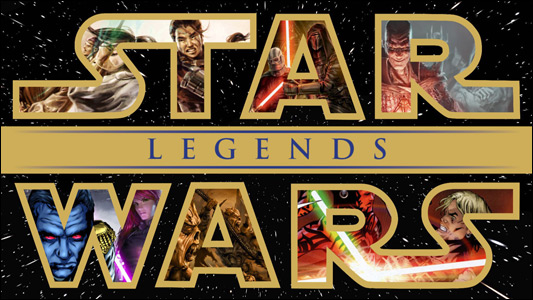 Now that Disney Star Wars is acknowledging the existence of the old Expanded Universe again, can perhaps something be done for The Vintage Collection packaging for these figures. Everything that falls outside of the films of major media events gets the original STAR WARS logo. And for so many characters, it looks foreign and incorrect, especially for characters created BEFORE and AFTER the events of the Battle of Yavin. The STAR WARS logo should be reserved for everything under Star Wars Episode IV: A New Hope, and nothing else. Doctor Aphra looks ridiculous on a STAR WARS card. So do these four new figures.

So I have two questions to ask. How do you feel about Hasbro reviving, with Lucasfilm’s permission, the old Expanded Universe logo? It seems more appropriate now than ever. And if they don’t want to use the words “Expanded Universe” anymore (which is how I understand things to be at the moment), then can we have two new logos: one for CANON and one for LEGENDS? In my opinion, both are better for video game characters, novel characters, comic characters, and all other characters that fall outside of the films or a major media event like The Mandalorian or The Clone Wars. Thoughts?

These new Gaming Greats action figures are excellent. I am really looking forward to them. But let’s face it. The STAR WARS logo couldn’t be more incorrect for them. Hasbro, can you work with Lucasfilm to develop the entertainment logos or CANON and LEGENDS? It would be the icing on the cake for these characters. Thank you!

Previous Article: Hasbro, It's Time To Add Velken Tezeri To The Vintage Collection