It is finally happening! Production for the Obi-Wan Kenobi Disney+ series will begin in April! The series will be set 10 years after the events of “Revenge of the Sith”, which means it’s almost a decade before the events of “A New Hope” and Luke is a young child.
The full cast of the series was also announced! Click through for the details!

And this is the cast: 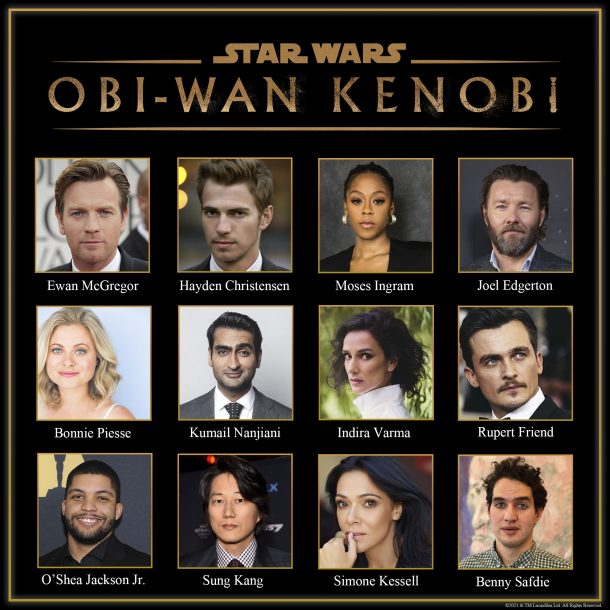 Ewan McGregor will of course be Obi-Wan, Joel Edgerton will be Owen Lars once more, Bonnie Piesse reprises her role as Beru (she was Beru in the prequels) and Hayden Christensen will of course be none other than Anakin/Darth Vader (probably in flashbacks or visions?). But who will the other actors portray? My bet is that Kumail Nanjani will be somewhat of a comedic relief character, since this is what he is mostly known for and Rupert Friend has “villain” written all over him. O’Shea Jackson is the son of rapper “Ice Cube”, he portrayed his father in the movie “Straight Outta Compton”. Sun Kang starred as “Han” in the Fast & Furious franchise.  Both Indira Varma and Simone Kessell are experienced TV actors. Kessell is half Maori, which may or may not be a complete coincidence, but Temuera Morrison, as we all know, also has Maori roots. It is of course mere speculation to think that Kessell’s character and Boba Fett could have any connection. Moses Ingram is a relative newcomer, she starred in “Queen’s Gambit”. I wonder if Benny Safdie (who is a director and actor) will be the local death stick dealer in Mos Eisley, he just has that look about him… we will find out soon enough!

Also, it is still unknown if Luke will actually appear, no child actor was announced today though. It is also unknown if Liam Neeson and/or Ian McDiarmid may reprise their roles. But Lucasfilm would probably want to keep high profile guest stars a closely guarded secret.

As already announced before Kenobi will be directed by Deborah Chow and the series was written by Joby Harold. Harold doesn’t have that many writing credits, he wrote the Guy Ritchie movie “King Arthur: Legend of the Sword”, his upcoming projects are “Army of Dark” and a Transformers movie. He was also a producer for movies like “Edge of Tomorrow” and “John Wick 3”. So he certainly has some experience with scifi / action focused entertainment.

Are you excited for the Kenobi series? What are your expectations? What do you think of the cast? Are you happy that Hayden Christensen returns to Star Wars?