Photos of the brand new Black Series Deluxe Return of the Jedi Boba Fett figure appeared on Reddit a few days ago. And there were early reports of warped helmets out of the box.  But it was not known if this issue is widespread or not. Now several video reviews of the figure have appeared on YouTube and unfortunately each and every figure reviewed has a seriously pinched helmet. What could have been a good figure will now come out of the box with a defect collectors will have to try to remedy by using hot water or a hair dryer. This may be the perfect opportunity now to talk about Hasbro’s new approach to glue helmets on unpainted heads. Click through for more! 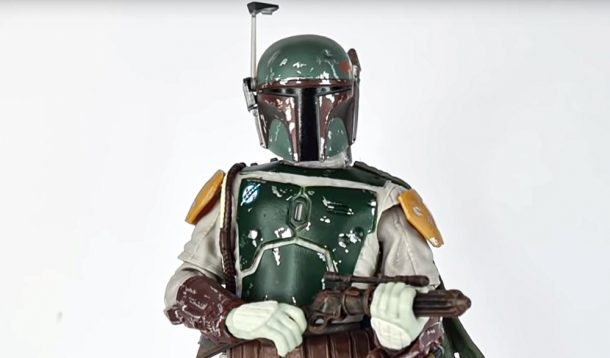 $30 will get you a warped helmet

Looking at the screenshot from the Centurions Corner video review of the figure you can clearly see that Boba’s helmet is very squished, the helmet doesn’t flare out a little bit, as it should, but instead is warped inward, towards the neck. It’s very pronounced, to the point that the hinge for the range finger is at an angle and you can see a huge gap where the joint for the range finder is.

Of course you can solve that issue with hot water etc. One video reviewer says he even put sticks etc inside the helmet (while using hot water) to make it flare out a bit more. And once you do all that the helmet shape looks definitely better.

But I don’t think a $30 figure, any Black Series figure of course, should require customers to fix the figure themselves.

So the question is why Hasbro insists on gluing helmets on unpainted heads, instead of sculpting just the helmet. This version of Boba never removes the helmet. And should Hasbro release a Mandalorian Boba Fett with removable helmet, then the helmet may be the same, but the head inside will of course not be the same, it will be old Boba. Does Hasbro need to save so much money on tooling costs that sculpting and tooling an extra helmet sculpt and creating another sculpt for a removable helmet with head underneath is too expensive?

Another issue may be the way the figure is packaged. The plastic tray apparently puts too much pressure on the helmet and squishes it.

So what do you think Hasbro should do?

Should Hasbro sculpt extra helmets again? Do they need to fix the way figures are packaged to avoid any warping right out of the box?

Unrelated to the helmet issue but yet another disappointment: while the original Empire Strikes Back Boba Fett received some weathering to his pants, the brand new “deluxe” Boba Fett for $30 has zero weathering, giving the figure a plasticky look.

And: will you still get your Black Series Return of the Jedi Boba Fett, knowing you will definitely have to fix the figure yourself? Experienced collectors will probably have little trouble fixing the helmet shape, but again, this is a $30 “deluxe” figure and shouldn’t require any fixing. Hasbro should address that issue during their next Star Wars livestream on April 9th. It’s unacceptable to release an iconic character like Boba Fett in a so-called “deluxe” set for $30 but to completely mess up the helmet shape and to save on paint apps. I would guess most collectors could do without the extra flame effects pieces or the blaster that is cut in half if the few cents these parts cost would have gone into a proper wash / weathering for the figure.

Tags: Boba Fett (Return of the Jedi) The Black Series