Quite a few companies tried their hand at a Darth Vader action figure. There’s Hasbro of course, but then there are also S.H.Figuarts/Bandai, MAFEX and even Revoltech. Has one of them the ultimate Vader? Let’s find out!

That’s quite a number of Darth Vader action figures!

So the big question now is… do we have an ultimate version of Darth Vader in the 6-inch scale? Most collectors will probably say “yes” and point to either The Black Series A New Hope and/or The Empire Strikes Back Darth Vader. And it’s easy to see why. Both figures have great sculpts and actually look like Darth Vader! Something which many other figures in the 1/12 scale don’t achieve!

You see where I am going with this… Since Hasbro cannot or won’t provide their Black Series figures with a reasonable amount of accessories you can’t recreate any of these iconic Vader poses with any of their figures. None of the TBS figures come with the necessary hands. 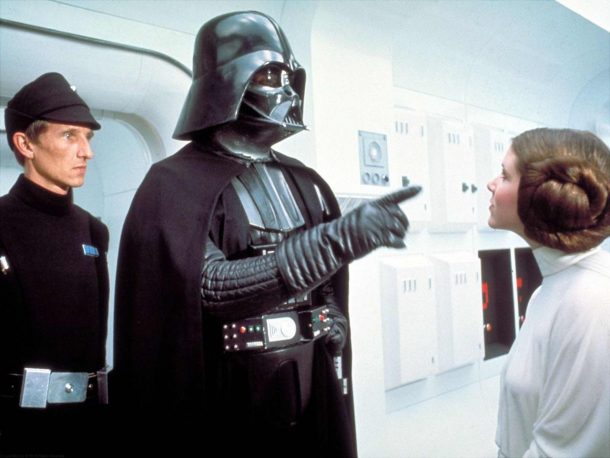 No pudding for you, young lady! Go to your room now and clean up!

Therefore, in my opinion, the one figure that comes closest to achieving ultimate status is…. The S.H.Figuarts Darth Vader Return of the Jedi figure (the 2.0 version of course). But with caveats. You absolutely have to replace the atrocious cape. I had an extra ANH TBS Vader and simply swapped capes. Fortunately, putting the TBS cape on the SHF Vader figure is extremely easy and it fits perfectly (it has the accurate length). Once you do that nothing comes close to the SHF Darth Vader in the looks department. Another caveat is that SHF Vader can’t sit down, because of the plastic inner robe.

But the positive aspects greatly outweight the caveats. Not only is the sculpt very, very, very good, the articulation is extremely fluid and you can achieve poses you simply cannot achieve with The Black Series. Also, you get a pretty good unmasked head and all the hands you would ever need. Pointy fingers (both left and right hand) included, so Vader can reprimand and accuse people in style. You also get all the Force hands you need and this Vader can also try to seduce Luke Skywalker to the Dark Side with the proper hands needed for that. Also, the details on this Vader are very crisp, crisper than The Black Series. You can also remove the dome part of the helmet to reveal Vader’s back of the head and the details on the helmet. And if that’s not enough you can also swap the helmet with the unmasked head. 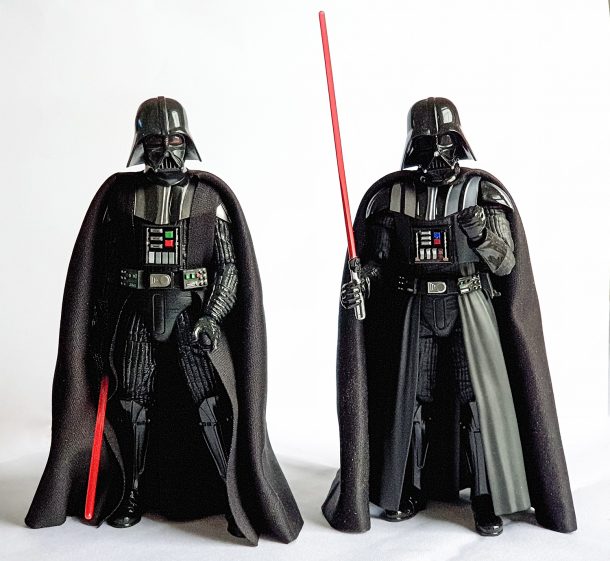 Of course most collectors will probably find both the ANH and ESB offerings in the Black Series more than good enough. And of course there are plenty of reasons to love these two figures. They have excellent sculpts and are (were) quite affordable. You can also argue that you should not be forced to replace a cape to make a figure truly excellent, as you have to do with the SHF figure.
But in my opinion achieving “ultimate” status also depends on versatility and accessories, and here The Black Series always falls short, unfortunately. If all you need and want is a Darth Vader wielding his lightsaber then The Black Series figures will make you very happy. If you want to be a bit more specific and send Leia to her room for being a naughty senator or Force choke other figures in style then the SHF ROTJ Darth Vader is the only figure that can do all that. Also, the option to remove the dome part of the helmet or to swap the helmet with the unmasked version further expands your display options. The MAFEX figures can do all or most of that as well, of course, however, their Vaders are all a bit too stylized, suffer from lanky bodies and somewhat soft details on the body suit, which is why I don’t think they come even close to achieving “ultimate” status.

So what do you think? What is your ultimate / favorite 1/12 action figure of Darth Vader? If you haven’t considered the most recent SHF Darth Vader action figure I recommend you give it a good look!