What Is The Best 6-inch Scale Han Solo Action Figure?

Let’s continue our retrospective of 1/12 scale Star Wars action figures! I covered Luke Skywalker earlier this week. So I think it’s more than appropriate to talk about the various action figures of Luke’s best (human) friend: Han Solo. Do we have an ultimate 6-inch scale Han Solo action figure? Click through for an overlook of all the Han Solos you can get in the 1/12 scale! 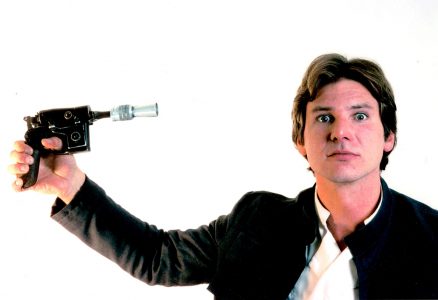 Your action figures are no reason to shoot yourself, Harrison!

As before with Luke I will of course include both The Black Series and S.H.Figuarts. Model kits are not included though. I also don’t include the Carbonite version of him, which is just an accessory.

Without much further ado let’s cut to the chase! Here they are, all the Han Solo 1/12 scale action figures you can get! As reference I also include a few photos of Harrison Ford as Han, so you can see what an action figure of him should look like!

The Empire Strikes Back

Return of the Jedi

And that’s it! These are all the (major) action figure variants of Han Solo in the 1/12 scale!

So the question is, do we have an ultimate Han Solo action figure? This question has an easy answer, but with caveats.

In my opinion the S.H.Figuarts The Force Awakens Han Solo action figure is THE very best action figure of Han Solo ever. Nothing comes close. The likeness is literally perfect. You also get the premium SHF materials, fluid articulation and that overall premium feeling. The only real, and quite huge, downside is, that TFA Han is probably one of the least popular versions of Han.

When we talk about OT era Han Solo action figures I feel that once again S.H.Figuarts comes closest to achieving “ultimate” status, because their A New Hope Han has the best likeness and it easily beats any of the modern Hasbro efforts. The SHF version also really captures the essence of the character with the facial expression. Something about all the photoreal Hasbro sculpts just feels off to me. Maybe it’s the paint apps, the lip color, or something about the shape of his face. Also, all the TBS photoreal Han Solo figures look a little bit too old.

And then there’s Alden Ehrenreich… The Mimban trooper version is excellent. It has a great likeness and it can also function as a really great looking trooper.

So in my opinion if you want the very best OT era Han Solo, you should track down the SHF version of ANH Han. If you can tolerate the sequels or just appreciate truly excellent action figures then the SHF TFA Han is the very best figure you will ever get. And Mimban Han is another excellent choice.

So there are a number of really great Han Solo action figures, at least one of them is even an ultimate version. Sadly, none of the OT era Black Series versions of him really do it for me. They are decent, they are ok, but all of them look off to me.

Are there any major version of Harrison Ford’s Han Solo still missing? Not really. Han never changed costumes all that much in the OT and Hasbro/SHF have all the major variants covered. Maybe a version of Han post defreezing with wet hair etc could be made, but that is incredibly scene specific. One could argue that Han in The Rise of Skywalker has a somewhat different hairstyle, but for all intents and purposes the TFA version of him will do here and a TROS release is not needed.

So what do you think? Do you agree that there is indeed an ultimate 1/12 scale Han Solo action figure? And what is your own personal favorite 6-inch scale Han figure?