Let’s take a somewhat closer look at Hasbro’s earnings report from Monday! What does it actually mean that Star Wars sales grew by 70% (!!!) in 2020? How can Star Wars toy sales even grow so much? It sheds some light on how disappointing sequel trilogy toy sales figures must have been. And how much did HasLab contribute to the 2020 sales growth?
The earnings call was also quite revealing, because Hasbro CEO Brian Goldner (probably inadvertently) officially admits that kids don’t buy action figures! Click through for all the interesting details and a discussion!

Hasbro can be happy

Hasbro presented their fourth quarter 2020 and full year 2020 results on Monday. As has been pointed out Star Wars sales grew by a whopping 70% in 2020. We’ll talk about that in a short while. But let’s look at the basic numbers first!

Toymakers, and Hasbro especially, are one of the few businesses who actually benefited from the ongoing global pandemic. While many businesses struggle toys are popular, even more so now that people spend a lot more time in their homes. So it’s no surprise that, even though revenue declined somewhat compared to 2019, Hasbro’s net revenues are still very excellent!

Not accounting for inflation Hasbro still had their 2nd best year ever.

Net earnings are also quite excellent for Hasbro, 2020 was definitely a good year for them.

As you can see (once again ignoring inflation) 2020 is one of the best results ever.

When we look at these numbers we can see various effects. 2018 was the year Toys R Us collapsed. And Hasbro’s numbers took quite a hit. 2019 saw several huge movie releases, most prominently the Marvel titles and of course The Rise of Skywalker, but more about that soon.

And here is a closer look at Hasbro’s Partner Brands revenue: 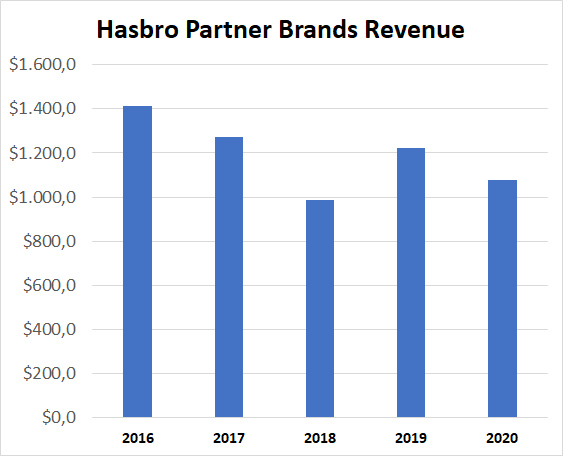 Unfortunately, the numbers don’t tell us all that much about Star Wars, since several franchises are lumped together in this category.

However, we do know that Star Wars sales have been increasing ever since early 2019, for about two years now, after sales hit a low with The Last Jedi.

Hasbro usually never talks about numbers for Star Wars (or any other Partner Brand) anymore. It is therefore quite remarkable that Hasbro stated that Star Wars sales grew by 70% in 2020. They must be exceedingly proud of that result, which they can be.

And now a more detailed look at Partner Brands revenue: 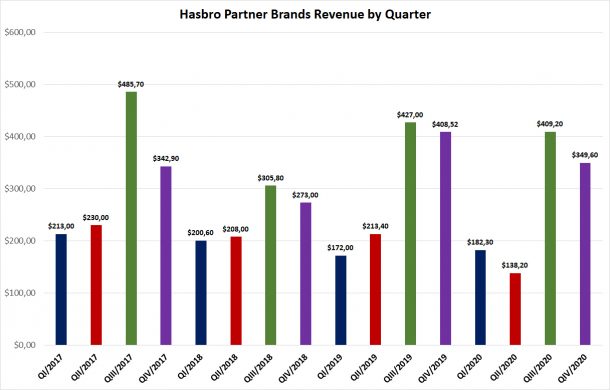 You can see the quarterly ebb and flow of Partner Brands revenue much better here. The toy business is highly seasonal and the holiday season is the most important time of year for toy companies.

Again, this is just a general overview and Hasbro usually only provides very sparce details about brand performance. For 2020 they simply stated that Frozen more than offset growth in Star Wars.

So let’s talk about what all of this means!

You usually don’t get these high growth rates with higher revenues, i.e. you usually only get high growth rates when you come from a small(er) number. Which basically means Star Wars toy sales must have hit an all time low following The Last Jedi in 2018. And that low was probably even lower than people think.

In the time after the prequels Hasbro always made $200+ million with Star Wars. The Force Awakens catapulted that number to almost $500 million – and this is the last number Brian Goldner semi-confirmed in an interview. After 2015 we know literally nothing about Star Wars revenue numbers. But that Star Wars sales can grow 70%  in 2020 can only mean one thing, in my opinion, sales in 2018 were abysmal and 2019 only managed to imrove on that a bit.

So the question is, how much did Star Wars sales decline post The Last Jedi? Back in 2019 I speculated that revenue probably fell below $200 million in 2018, maybe as low as $150 million, maybe even lower. 2018 really was a lousy year for Star Wars toy sales, this cannot be overstated. Solo flopped at the box office, there was no Christmas movie release in 2018 and thus holiday sales were very weak.

2019 improved things again for the brand, with three high profile releases in the last quarter, The Rise of Skywalker, The Mandalorian and Jedi:Fallen Order. How much sales grew in 2019 we don’t know, but if sales grew by 70% in 2020 it’s very likely that sales were still below $200 million in 2019. Hasbro has never made more than $300 million with Star Wars toys in a non movie year. So to achieve a 70% growth rate it’s almost certain that the 2019 numbers were still comparably low and that in turn means that back in 2018 the numbers were even worse.

To provide some perspective:

If Star Wars revenue back in 2019 was $180 million it would be $306 million in 2020. Which, as stated above, seems somewhat unlikely, since Hasbro has never made so much money with Star Wars in a non movie year (following the prequels).

Something like $250-$280 million at the most seems more likely, which would be in line with Clone Wars era sales figures in the 2010s (a little higher even, ignoring inflation). That in turn means revenue in 2019 was probably in the $150-$170 million range.

Either way Star Wars toy sales have made an impressive comeback and of course one thing alone is reponsible for that: The Mandalorian.

That a non movie year has higher Star Wars toy sales than a movie year, a movie year which had the finale of the “Skywalker Saga” and a huge Force Friday event is both amazing and embarrassing. It is amazing because it’s nothing but good news for The Mandalorian. Several toy industry people have stated in the past how much draw The Mandalorian has. But in turn it also means that the sequel trilogy is single handedly responsible for the most amazing slump in Star Wars toy sales ever. This cannot be overlooked, it should inform not just Hasbro’s, but also Lucasfilm’s and Disney’s decisions going forward. It probably also explains why there are so few The Rise of Skywalker toys.

Sequel trilogy toy sales, when you ignore The Force Awakens, are nothing but disappointing. Bland designs, controversial characters, questionable choice of action figures all lead to disastrous toy sales. How disastrous is proven by the fact that in 2020, a year with virtually no new blockbuster movies, no Star Wars movie and “just” a streaming show that is not even legally available all across the world (but in all major key markets!), toy sales grew by a massive 70% compared to the year that not only had a huge Force Friday event but saw the release of the finale of the entire Skywalker Saga.

Let’s shift the focus to something else, in Hasbro’s earnings call Brian Goldner made a very interesting remark regarding Star Wars toy sales. Here’s the quote:

Even without the child items, Hasbro’s Star Wars lines grew significantly behind increasing fan engagement globally in Black Series and The Vintage Collection, a reemergence of our kid’s business fueled by Lightsabers, and our new vehicle line, Mission Fleet, and a resurgence in casual pop-culture fans in Star Wars overall.

So there you have it, from Brian Goldner himself. He basically admits that kids don’t buy the action figures. At all. He talks about the “reemergence” of the kid’s business fueled by roleplay items like lightsabers. This, in turn, can only really mean one thing. Collectors already know this based on anecdotal experience, but now Hasbro has finally confirmed that things like The Black Series and The Vintage Collection are primarily, virtually exclusively for adults. Why Hasbro still insists on slapping that “Ages 4+” label on both lines is even more puzzling in light of this. I believe the action figure lines could greatly benefit if Hasbro officially labeled them collector items and designed them with “Ages 15+” in mind, like the Japanese companies do.

Goldner’s statement also confirms that more casual fans had lost all interest in Star Wars toys as the sequel trilogy progressed, leaving behind only hardcore fans who kept toy sales somewhat afloat, barely so. This is the power of Grogu. The Star Wars character that single-handedly put Star Wars back in the pop culture spotlight, something that characters like Rey or Kylo Ren apparently failed to do, at least as far as toy sales are concerned.

To close things let’s quickly talk about HasLab. How much did the Razor Crest contribute to the growth?

Hasbro made a little less than $10 million with the Razor Crest. We don’t know any absolute numbers, but if in 2019 Hasbro made $150 million and in 2020 $255 million (70% growth, remember!), the Razor Crest contributed ca. 9.5% to the growth. Not bad at all for a single item! But as you can see most of the growth came from other things, action figures and role play items. Still, the Razor Crest made a significant contribution to the sales numbers! And it would surprise me a lot if Hasbro didn’t already plan the next Star Wars HasLab!

With these impressive numbers for Star Wars in 2020 we can only hope that Hasbro (and Lucasfilm) will draw all the right conclusions.

So, what do you think about all that? Are you surprised that Star Wars sales grew so much in 2020, the year without movies?

You can read the full transcript of the Hasbro earnings call here.