Mission Fleet, Lightsaber Squad, And Every Format Of Grogu Oh My! But Nary A TVC Or TBS6 Figure Anywhere

You can go to any Walmart or Target store in your area and find almost every single Hasbro Star Wars product except for The Vintage Collection and The Black Series 6″ lines, save for a few 6″ remnants like Jyn Erso and Janna. And it’s been this way for much too long. What is going on here? How can Hasbro get all of the future and current peg-warming products out to retail with little effort? (more…) 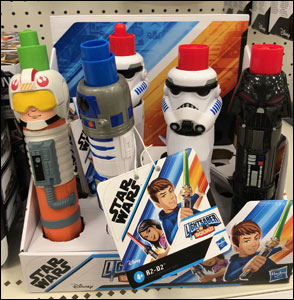 But the stuff that everyone wants might only make a brief appearance a couple of days of the year? I am confounded how Hasbro keeps saying that they need Big Box retail to make the collectors’ lines thrive when they don’t get in any products to purchase. As one party continues to blame the other, the fact of the matter is that Big Box is squatting on their own toy aisles for “nothingness” instead of giving the shelf space to Star Wars action figures instead. In case you haven’s seen the latest peg-warmer, the Lightsaber Squad line is hitting everywhere now. I’d like to know when I will see the TVC Power Droid wave or the last three 6″ waves hit my locals stores. I know some of you see these figures out there, but believe you’re in the minority.