The Many Joys Of Posing Action Figures

Today I want to talk about posing your action figures. I will specifically talk about the Black Series, but I suppose what I want to talk about will apply to other lines as well. I moved last year, that also meant I had to put all of my Star Wars figures into boxes only to put them back in their display cabinets and on shelves again. But I put off that task for quite a while, several months actually. Because, quite frankly, posing action figures is no fun at all to me. Why? Click through for more! 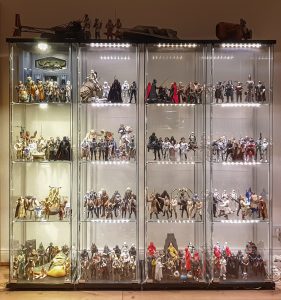 They are all back in their cabinets after all

I have about 300 6 inch scale Star Wars figures, mostly Hasbro Black Series but also quite a few figures from SH Figuarts, Bandai and Mafex. So when I talk about posing figures or putting them on display on a shelf I don’t talk about that new figure you got and that you enjoy playing around with for a while. I talk about the task of putting ALL your figures back into their cabinets or on their shelves at once.

The picture above shows my four Detolf cabinets, not pictured here are a few figures standing on my desk and most of the sequel figures which are now on a shelf next to the display cabinets. I don’t want more than four of them and I needed space for Mandalorian and prequel figures.

Anyway, after I had moved I found that I really dreaded the task of putting the 300-ish figures back on display. And thus I put it off for several months. I enjoy looking at the figures, but posing them is an entirely different matter. Why? Because I knew what was expecting me. I had moved only three years before that and back then, even with fewer figures, it really was no fun at all to pose the figures.

Why? Well, this is quite easy to explain. Many, not all, but quite a few, Black Series figures are very difficult to pose, they just don’t want to hold a pose and can’t keep their balance. So posing them can really test your patience. All in all I needed about 7 (!) hours to pose all the figures again.

Most of the time was spent on getting the figures to stand. So they would not fall over. Again. And again. And Again. Not all figures are affected fortunately, but virtually all Black Series figures are plagued by ratcheted knee and ankle joints. And that makes it very, very difficult at times to pose them fluidly, or to get the feet to be flat on the surface and not be at an angle sometimes.

The older figures are also plagued by rubbery knee joints that are very prone to warping. On top of that some figures have warped feet. And I am not even talking about that very smart design decision to give all the FO Stormtroopers slightly curved feet. Some female figures have tiny feet and on top of that rubbery ankle joints. I believe Rebels Ahsoka fell over 5 or 6 times until I finally found a pose where she can keep her balance without killing everyone in her vicinity.

Unfortunately some figures decide to fall over only a after a short while, after you almost believe you have finally found a pose they can hold, taking figures next to them with them. So you need to pose four of five figures all over again.

The ONLY figures which were a joy to pose were the Japanese figures. You know, the figures that have non ratcheted joints, that allow for true fluid articulation. You simply give them a pose and then you can adjust the feet any way you like to achieve perfect balance. The hinged toe joints also really help here, since you can always put the feet flat on the surface, no matter what.

So after all these many words it boils down to this: I REALLY wish Hasbro would stop insisting on ratchet joints for their figures. The new Black Series knee joints are an improvement, I believe rubbery and warped knee joints will be a thing of the past with them, however, even they are still ratcheted, and the ankle joints come straight out of hell. They make things very, very difficult.

Some random remarks: General Grievous did not want to stand at all without a Mafex figure stand before the move… the few months in a box seem to have benefited him… he now holds his pose and doesn’t fall over at all. Even though my figures are never in direct sunlight both the Han and Luke Stormtrooper disguise figures have slight yellowing of the torso. The proper Stormtroopers don’t have this. Hasbro should have used better materials here. Even if the Black Series has made several serious advancements the use of rubbery joints, soft plastic for some accessories and the darned ratchet joints still hold them back. So if I have one wish at all for the Black Series going forward, then it’s the abandonment of  ratcheted (and sometimes rubbery) ankles and knees. They make posing very difficult and outright annoying at times.

I also have two Marvel Legends figures… Hela is another figure that is almost impossible to pose, she just loves falling over. Her heavy plastic cape doesn’t help at all here. So it’s certainly an issue that plagues various Hasbro action figure lines, not just Black Series, not just Star Wars.

But what about you? Do you enjoy (mass) posing your figures? What are your pet peeves? Do you use figure stands? I have no figure stands (I don’t like their aesthetic anyway). Are shelf divers an issue for you?