Good evening, Toy Runners! I waited to do today’s post so I could take some photos of my new figures I got in the mail! I also found a new figure in the store (shocker), so I will share them together. Check it out and share your photos in the comments!

I found a too-good-to-pass-up deal on Rebel fleet troopers on eBay, so at long last, I have added this figure to my collection. Once the Tantive IV set hits next year, I’ll have a solid squad of 6 RFT’s to defend the hallway from attacking imperials.

I stopped at Target today to return an item, and upon finding empty Star Wars pegs, I noticed a Hasbro rep touching up the Nerf aisle. They looked apprehensive as I started asking them a question and I am sure I was about to get an “I don’t work for this store” response promptly. Luckily the words “vintage collection figures” escaped my lips before they could retort. They looked very relieved! They said they stocked the Walmart across the street just before coming to Target (“both big ones and small ones” were their words).

I quickly left and headed to the Walmart toy department. Unfortunately, in a matter of a couple hours at most, the TVC figures were all gone leaving a lone Rex and Vader (and about 4 pegs full of untouched 6″ figures that were stocked at the same time). Since I had just gotten the RFT’s in the mail, I figured it was fitting to get Darth Vader. 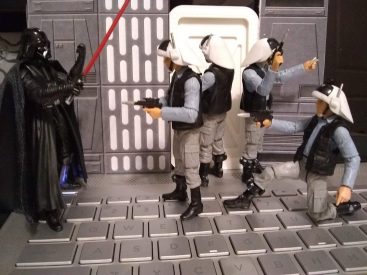 This Vader doesn’t seem to be getting much love from the fans. I got it because it was Rogue One specific, but it certainly isn’t my favorite version of the dark lord. This ROTS version is superior in that it has rocker ankles and ball jointed wrists.

What did you get this week? Lets  see it in the comments below!