A Full Episode Of Star Wars Detours Has Leaked!

But a few hours ago a full episode was leaked on the Star Wars Leaks Reddit. The episode is about wannabe bounty hunters 4-LOM and Zuckuss trying to rob Dex’s diner on Coruscant. Runtime is¬† less than 7 minutes. Voice actors, among others, are Billy Dee Williams (in a cameo as Lando), Ahmed Best (as Jar Jar, of course) and Breckin Meyer as Boba Fett (also a cameo). And before you wonder, of course the show is not canon.
Check out the video soon, before it gets taken down by Lucasfilm. And then leave your thoughts about Detours in the comments! In my opinion it’s probably best the show was canned at the time, while it’s not “bad” it feels somewhat out of place. However, maybe Disney can finally release the episodes on Disney+ or their Star Wars Kids YouTube channel. It could be fun for the kids. There are a few good chuckles in the episode, but watch for yourself! Click here or on the screenshot below to go to the Reddit thread with the video! 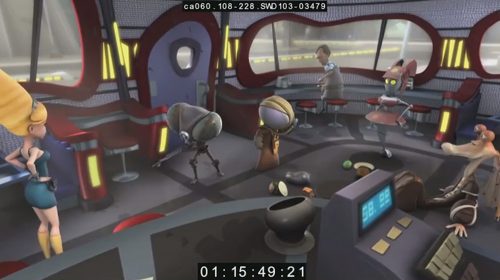