You have to wonder what happens at Hasbro’s Product Development meeting. Do they pitch ideas based on what’s popular and sells? Or are they so far behind with playing catch-up for being ill-prepared with The Mandalorian, that everything is getting pushed to the backburner? Think about it.

Hasbro designs a multipack including a trio of Cantina aliens or Jabba’s aliens. Check. Classic vintage Kenner packaging. Check. The first run sells out in no time. Check. Hasbro solicits it once again due to its success. Check. Hasbro never produces another set like it again. Check. “We seem to be made to suffer. It’s our lot in life.” Check. (more….) 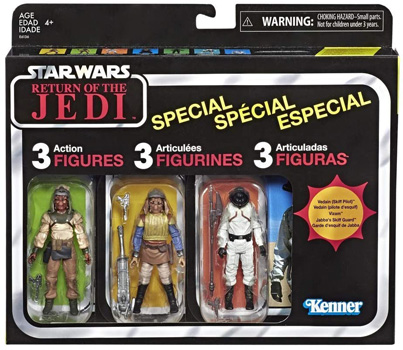 As long as I’ve been doing this, I’ve harassed Hasbro to produce things that offer collectors more Original Trilogy aliens to collectors at retail. The harassment has yielded a great many things. But we’re still a long way off to where things need to be.

How is it a successful set like the Skiff Guards three-pack from a while back still has no successor? Think about this. The first set offered two repacks (with slightly updated paint operations) and a “new” figure, which wasn’t much more than existing parts kit-bashed to create a long-awaited skiff guard.

But the set sold out in record time. And although much delayed, Hasbro solicited the pack once again to the Fan Channel to meet its retail demand. It was already going for a hefty price on the aftermarket, if you weren’t aware. But despite its success, Hasbro hasn’t shown any goodwill to the TVC community that more packs like this are forthcoming, aside from “it’s something we’d like to do.”

If Hasbro plans to make 2021 the year of “the Kenner 96,” they need to wake up to the fact that many of the missing candidates are background aliens and other “blink and you’ll miss them” characters. A set like the Skiff Guards three-pack is an excellent way to get those characters out to us, carded no less. They’re going to have to balance things better. New toys from The Mandalorian are excellent and needed, but nothing replaces the need for Original Trilogy aliens. Nothing.

As we forge ahead to the 40th anniversary of Return Of The Jedi, I imagine that we’ll see a greater focus on the characters from Jabba’s Palace and the Battle of Carkoon. But hopefully, Hasbro is already planning out the blueprints of what collectors will want to see now because it takes time to show the proper love a classic toy line deserves. The 40th Anniversary of The Empire Strikes Back and A New Hope had some great moments in the Hasbro line, but both missed the mark in the 3.75″ super-articulated line. Episode VI needs more character love to populate that Sail Barge, Hasbro.

Keep badgering Hasbro to treat Return Of The Jedi right in The Vintage Collection, beginning now and through its four-decade anniversary in a couple of years. They have one bite at this apple, and we want it to be a BIG one. It’s time to stop the seal clapping and barking, and start demanding things that are getting neglected.

Next Article: 1984 RETURN OF THE JEDI Prune Face: Trilogo Update