The LEGO Star Wars Holiday special was released on Disney+ today. Is it any better than the original Holiday Special? Yes, of course. The special is a fun love letter to the entire franchise and something the whole family can enjoy. Click through and leave your own thoughts in the comments! Some of my assorted musings follow after the jump!

Beware that this is a spoiler zone! Only click through if you have either seen the special or love spoilers! 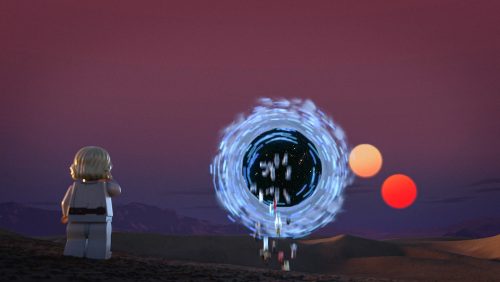 Not your typical binary sunset on Tatooine

All in all I think the LEGO Star Wars Holiday Special worked really well. Unfortunately the weakest scenes are all on the Millennium Falcon with the sequel trilogy characters, because the special doesn’t really know what to do with most of them. Poe is all about making food (which he’s very bad at), Finn is moping that his training is not working out, Rose does… nothing really, but the special dedicates only very few minutes to the scenes in the “present” and most of the runtime is all about Rey’s turbulent adventure in time and space in which she gets to meet basically all important Star Wars characters ever and has to thwart Emperor Palpatine’s nefarious plan to escape his destiny. And those scenes are a lot of fun.

Some highlights for me:

And no, contrary to some “rumors” on YouTube Rey does not train Luke. In fact Luke helps her out quite a few times and Rey is even unable to repair a badly damaged BB-8, but Farmboy Luke puts him back together with ease. Every single character is treated with respect and love. Rey merely tells Luke to listen to his master Obi-Wan during the Death Star trench run. But I guess some people will still find some other things to be outraged about for one reason or another. I mean, when people find reasons to be outraged about season 2 Mandalorian episodes, then the LEGO Star Wars Holiday Special will most likely not be an exception. In my opinion it’s high time to ignore the entire outrage industry on Twitter and YouTube, no matter which side is outraged first.

The LEGO Star Wars Holiday Special currently has a 7.5 star rating on IMDB, which I feel is a an appropriate score.