The HasLab Razor Crest Jawa Elder Will Be Unlocked! [UPDATED]

With 3 1/2 days still to go the HasLab Razor Crest is now fast approaching 17,000 backers, which means the Jawa Elder will very soon be unlocked. Most likely within the hour (the count rose by another 12 backers in the past 5 minutes since I took the screenshot). So now the only question is if the Razor Crest will get more than 20,000 backers with roughly 83 hours left on the clock.

Are you surprised by the success of the campaign? And what is your overall opinion on the Razor Crest HasLab with its various unlocks? Is it all you hoped for? Or would you have wished for more?

No matter what you think, it is certainly good news for Star Wars collectors that the campaign (most likely) exceeded Hasbro’s expectations and may even come close to the Marvel campaign in regard to the total number of backers. Now the real question is if something that receives close to 20,000 backers really needs to be a crowdfunded item. Do you feel HasLab should be more niche and appeal strictly to hardcore collectors or are you ok with the fact that the Razor Crest can be considered a mainstream item from a current show that is extremely popular among collectors? Leave your thoughts in the comments!

UPDATE: the Jawa is unlocked, backer count is now at more than 17,500!

UPDATE 2: the Razor Crest has crossed the 19,000 backers mark with 54 hours still to go. At the current rate it is quite likely the Razor Crest will get more backers than the Marvel Sentinel! 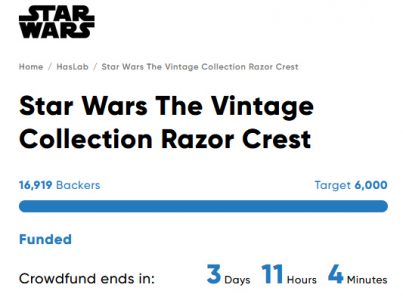