GTP, who are primarily known for their “Space Walls”, has been an official Star Wars licensee for a few months now. And today GTP finally revealed the first officially licensed Star Wars diorama set (which had been leaked on the GTP website before): a massive 91.5 cm / 36 in long Tantive IV hallway diorama for 1/12 scale figures, i.e. the Black Series. The set comes with 100+ (!) static and blinking LED Lights! Click through for more details! 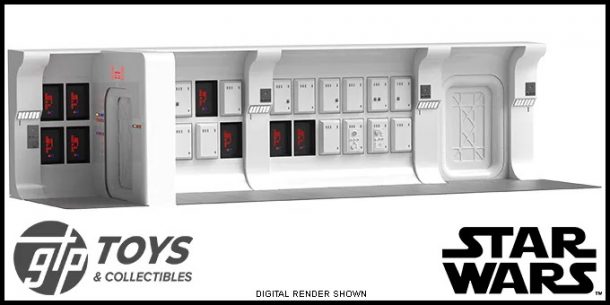 MSRP for the diorama is $199.99. People in the US and Canada can pre-order the set until December 13th for $179.99. It seems people who happen to live outside North America are out of luck here. The set will ship in March 2021.

The Tantive IV hallway is massive. At 91.5 cm / 36 in it is longer than the Razor Crest. Actually, it’s so long it won’t even fit on a standard IKEA shelf (Hemnes or Billy), which may be a little bit inconvenient perhaps. 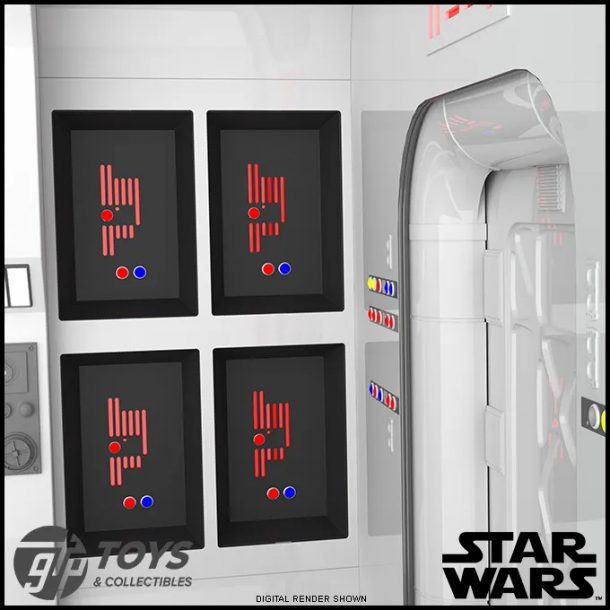 The set comes with a myriad of LED lights

According to GTP you can place more than 30 Black Series figures in the hallway. So that epic shootout between the Empire and the Rebels from A New Hope can be recreated.

It is interesting that Hasbro obviously had no interest in creating a Black Series version of their TVC Tantive IV set and leaves it to GTP to make a high end Black Series compatible hallway.

Now the big question is if you are willing to pay $200 for this massive diorama. It is certainly a toy photographer’s dream, especially with all the lights.
So, will you pull the trigger and order the Tantive IV hallway? Do you think it’s worth the money?

I only wish the hallway could be split it in half or so. It might be quite difficult to find a place for this massive diorama. Maybe GTP should have had Ikea shelves in mind when they designed the set and make it 10 cm / 4 inches shorter or so, still very massive, but it could have fit on a typical Ikea shelf.

You can pre-order the set on the GTP website if you are in the US and Canada. People elsewhere will have to resort to 3rd party sellers and the usual etailers, probably.