Toy Photography Is Changing The Business

Today I want to talk about something that, in my opinion, has changed action figure collecting quite substantially in the past few years: toy photography. For the longest time action figure and toy collecting meant that you probably had various figures and vehicles on display in your home – but that outside of family members and friends almost no one got to see your collection. But in recent years more and more collectors have taken on toy photography as yet another hobby and have begun to share their work online. And this ongoing trend has not gone unnoticed by the various toy companies. And I think it has even changed the product lineup to a certain degree, to a point where modern figures, vehicles and playsets maybe even have the toy photographer a lot more in mind than the traditional collector. And it’s not just the Black Series, the Vintage Collection as well, ever since the line was relaunched in 2018!  So let’s talk about toy photography and how it has changed the business! 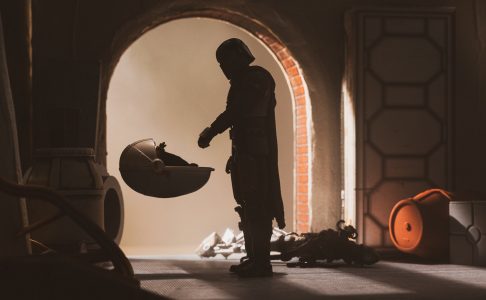 Not a scene from the series

The Black Series Instagram page has about 142,000 followers and 15,000 posts. When you just look for #theblackseries you will find almost 136,000 posts. Now some of you may already roll their eyes when I mention Instagram or YouTube (on YouTube popular figure reviews can get more than 100,000 views), but the massive numbers on Instagram, social media in general and YouTube on top of that mean that a substantial number of collectors and potential collectors (the ones who think about buying a figure) follow the various toy photography pages on Instagram or the various YouTube reviewers. These channels are still relatively new, especially when compared to the various collecting websites, but I believe the new fan channels are growing a lot more in influence, to the point that toy companies are beginning to increasingly cater to the people who do frequent Instagram or YouTube. 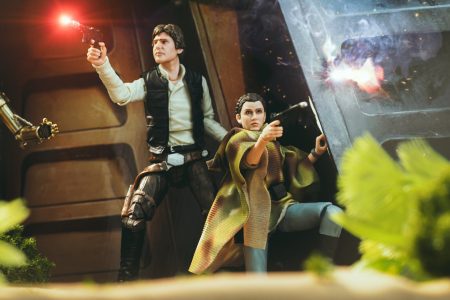 In fact, various toy companies do have dedicated toy photography campaigns. Hasbro has the #hasbrotoypics campaign on Instagram and they put up walls with a choice selection of toy photos at the various cons, but it’s not just Hasbro, Diamond Select Toys or Mezco also actively support toy photography. Lucasfilm has Star Wars Fan Awards (in various categories) even some etailers have photography contests. 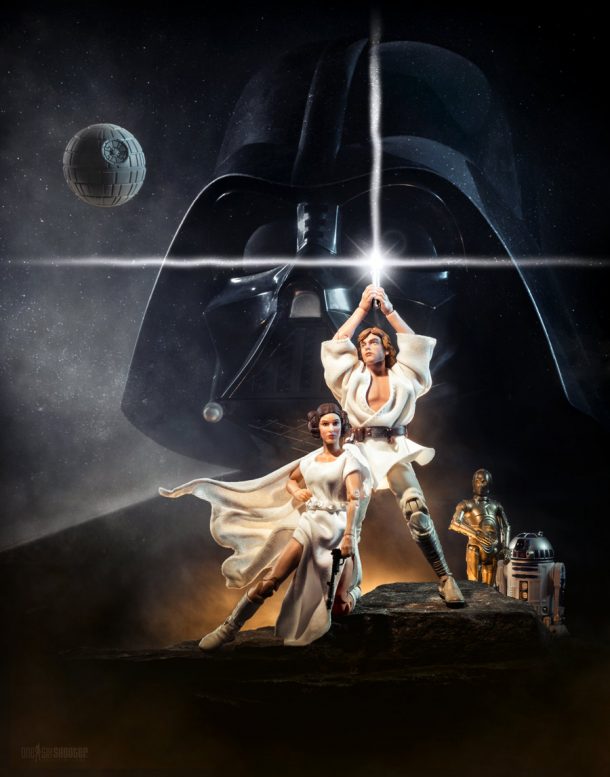 That alone may not mean all that much, but I believe that toy photography has become such a big influence and important factor that Hasbro now develop new products also and maybe even predominently with toy photographers in mind.

Hasbro updated TVC to photoreal, a process which can still be improved upon but even as it is now TVC figures have never looked better, even more so in photos where 3.75 inch figures mostly looked like toys until recently. But various efforts by Hasbro have changed that. Just look at that scene from The Mandalorian recreated with the TVC Troop Transport and the new TVC Stormtrooper. You may mistake it for a scene from the actual show at first glance.

And then let’s look at all the recent “playsets” Hasbro released for the Vintage Collection. Jabba’s Palace, the Carbon Freezing Chamber and the upcoming Tantive IV hallway are much more diorama pieces, backdrops used in toy photography, than they are actual playsets. You will be hard pressed to find any meaningful play features, what you will find are sets that are ideal for modern toy photography.

Now why would Hasbro want to make TVC attractive for toy photographers? Just remember the numbers I quoted in the beginning, the Black Series Instagram page alone has 142k followers. And it seems Hasbro is eager to reach a new audience, the people who do love toy photos, who follow companies on social media and who do watch toy review videos on YouTube.

Until now Hasbro’s #hasbrotoypics was almost exclusively about 6 inch figures, mostly Marvel Legends and Black Series. But now Hasbro has begun to hire toy photographers and sent them TVC promo figures for one purpose: to create Vintage Collection toy photos for Instagram. 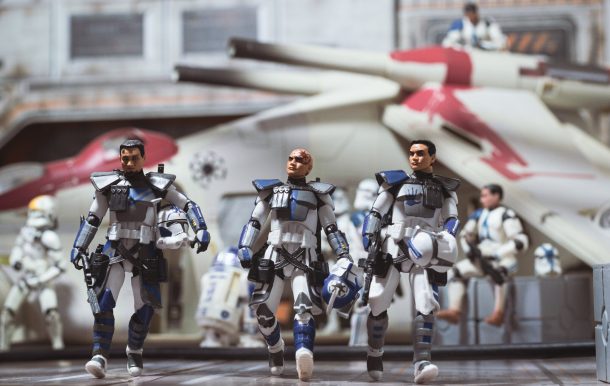 He, and the many other toy photographers, started out as mere hobbyists, people who just loved to take stunning photos of their toys. And now Hasbro are either hiring several of them as freelancers and/or send them promo sets with new releases. The purpose is clear: each and every toy photo on Instagram, whether it’s by professionals or hobbyists who do it for fun, is basically a free ad. And the good thing is you have an extremely high reach, since many collectors already follow the various toy pages on Instagram (or YouTube).

If Hasbro manages to establish TVC as a viable option for toy photographers it may catapult the line into a promising future. Because, as I mentioned previously, until now toy photography was almost exclusively a 6 inch scale affair. When the 3.75 inch scale becomes a lot more popular on Instagram (as of now it is no contest and 6 inch scale figures greatly dominate toy photography) and other toy photography channels it may attract a whole new generation of fans, the ones who don’t frequent the collecting fansites and talk about cardback art or name pills (even if those things matter a lot to many hardcore collectors), but use almost exclusively social media and YouTube and just want good looking figures. 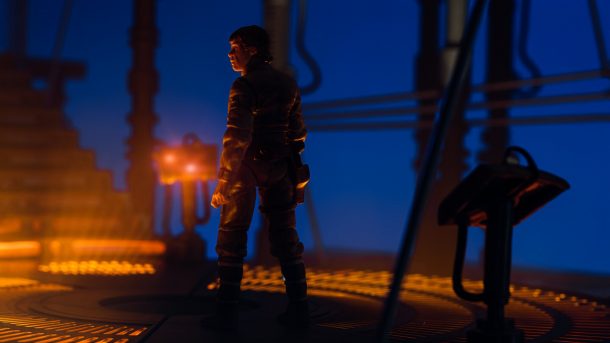 And in light of all this the recent “playsets” released for The Vintage Collection make a lot of sense. They are ideal diorama pieces for toy photography. The Carbon Freezing Chamber in the photo above looks almost cinematic, and the Tantive IV hallway can and will be used as a nice diorama piece for the display at home, but its primary purpose may actually be for toy photography.

Until recently toy photographers had to resort to third party options for most things. Various people and small companies offer custom 3D printed parts, props and even diorama pieces. But Hasbro is apparently no longer willing to leave this market entirely to them, hence the various TVC diorama pieces.

And it doesn’t stop with Hasbro. GTP, who you may know as the manufacturer of Space Walls, have the official Star Wars license. And only last week a brand new officially licensed diorama set by GTP was leaked on the internet: a Tantive IV hallway set for the Black Series. Something that will make toy photographers very happy. Because custom built parts are quite expensive of course, so mass produced offerings by officially licensed companies are certainly a welcome addition. 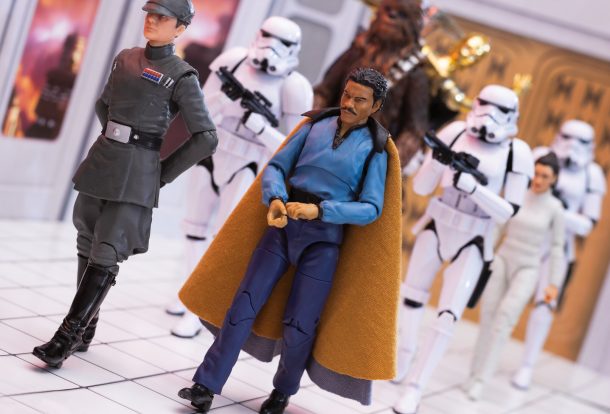 It seems toy photography has changed the business quite a bit. The big companies such as Hasbro are increasing their support for this new scene. You still have to resort to people who 3d print parts if you want certain accessories or props. You can get Rey’s custom built lightsaber from The Rise of Skywalker for the Black Series today, if you like. But not from Hasbro. 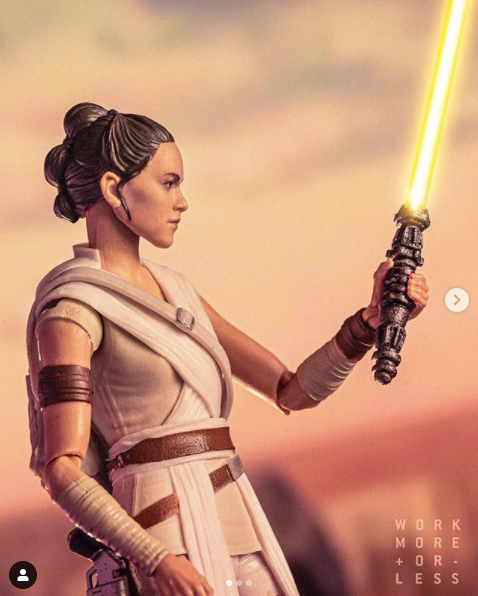 This lightsaber is by Dagobah Customs and is sorely missing from the release by Hasbro (who probably didn’t even know about Rey’s own lightsaber until they saw the movie).

So maybe this is about to change. I wonder what other things Hasbro may do to cater to toy photographers and the many fans of toy photography.

Do you welcome the idea that – most likely – TVC “playsets” will actually no longer be playsets but dioramas suited for toy photography? Would you like it if Hasbro (or maybe GTP) offered accessory and add-on packs with things like barrels, crates, containers and various weapons – things that almost any collector would certainly like to have, but which photographers desperately need to make their photos as real as possible?

Or do you shake your fist, tell the kids to get off the lawn and think Instagram, social media and YouTube in general are not a good influence on modern toy collecting?

Where do you stand? Do you think it’s a good idea that Hasbro (and so many other toy companies) seek the support and help of toy photographers, with toy photography becoming a new focus? Or would you rather Hasbro cooperated much more with the legacy collecting fansites that kept the hobby a talking point even in times when action figure collecting was more of a niche?
And: do you take photos of your figures as well and do you post them somewhere? Or is your collection your collection only, only seen by you, family members and friends?