The Newest Wave Of The Vintage Collection Revealed!

Site swblackseries.de also reveals the next wave of The Vintage Collection that contains the previously revealed Boba Fett and Liea (Bespin Escape). They’ve included Snaggletooth as part of the assortment. Let’s hope it’s an all-new figure based on the character from the Holiday Special, and not the oneincluded in the Special Action figure et!. ALso new to the assortment is Greef Karga and The Child. 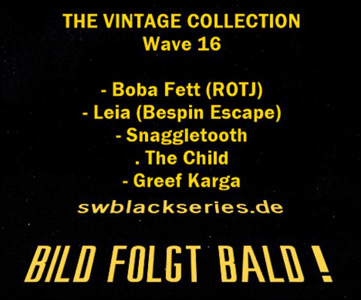