Is The Galaxy Of Adventures Action Figure Line Already Dead?

After several Hasbro livestreams and a flurry of announcements in the past few months one line has been conspicously absent from these events: Galaxy of Adventures. So is the 5 inch action figure line based on the animated shorts on YouTube already dead? What does that mean for the future of Star Wars collecting? Click through for some general thoughts and a a discussion. 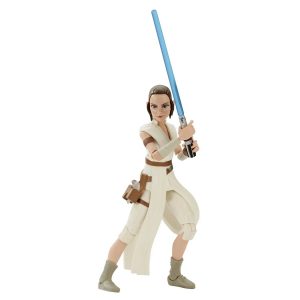 We haven’t heard anything from Hasbro yet. So it’s not certain if the toyline has indeed been canceled. Maybe Hasbro is waiting for a new season of Galaxy of Adventures shorts to be released on YouTube before they announce a new wave of toys. But it is entirely uncertain if there will be a third batch of Galaxy of Adventures shorts. The last episode was released in May 2020.

Now most of you will probably be adults, somewhere in the 30-50 age range, most of the current generation of collectors may still collect figures 10 years from now. But what about 20 years from now?

And this is why Hasbro’s (and Disney’s) continued failure to engage kids and to get them to a) watch the shows aimed at kids and b) buy the merchandise is cause for concern, at least for Hasbro and Disney. Because without a new generation of kids wanting to play with and eventually collect Star Wars toys, Star Wars toys will fade away as the current generation of adult collectors retires from the hobby. Unless the kids of today who don’t care about Star Wars action figures suddenly begin to love them once they turn 18.

The question is if Disney simply needs better source material, so kids actually want to watch the content and play with the toys or if Hasbro just don’t know how to make toys for kids anymore. I really doubt it’s the latter and I believe there are two major reasons for the lack of enthusiasm for kid-focused Star Wars entertainment and toys: Disney hasn’t really come up with kid focused content that kids find interesting and kids don’t really want to play with action figures all that much anymore, even if they like something like The Mandalorian. And why would they when they can merrily tap away on a smartphone and play an interactive game? Industry data shows that while toys, in general, are still very much in demand (the toy industry is generally doing pretty well and sees worldwide growth! So no, the toy industry is not dying!), one segment is increasingly in demand by adults: action figures. And the action figure segment is actually doing pretty well (pre Corona, at least), with double digit growth in the US in 2019. But it’s not kids that are responsible for all this, it’s adults. And the few collectible lines that are huge hits with kids are extremely different from your typical Star Wars action figure. LOL Surprise is very popular with young girls, something Disney still dreams of when it comes to Star Wars. So the traditional action figure industry may have a serious problem in the long term.

So maybe the continued failure of non collector focused Star Wars toy lines is the beginning of the end. Not today, not tomorrow, not next year. But it will be interesting to see if there are still mass produced Star Wars action figure lines in 2030 and beyond. And while that may seem very far away, a company like Disney didn’t buy Star Wars for the golden goose that is merchandising to die of old age along with the current generation of collectors. Unless things like plush toys, lightsabers and role play items will entirely take over.

So what do you think? Do you think Star Wars collecting will have a future with a new generation eventually buying the toys and collectibles? Do you think Disney and Hasbro can find a way to engage kids? And if so, how? It’s evident that even the fanciest and coolest Black Series or Vintage Collection action figures don’t impress kids, these lines are almost exclusively bought by adult collectors now. So the general question is if kids even want to play with action figures, and here I mean the average kids, not kids who grow up with a collector as a parent. Industry data would suggest the answer to that is mostly “no”. And to make it clear, this does not just affect Star Wars, you can say the same about Marvel action figures, DC action fgures, GI Joe, Power Rangers or almost any other action figure toyline.

Short term and even mid term things should be fine, of course. Adults usually have lots of disposable income. Action figures will be refined further, getting better, looking more realistic. But things like HasLab and more and more expensive action figures are clearly an indicator that Hasbro is focusing on the customers they have, adults. I wonder if Hasbro will come up with a new toyline aimed at kids soon (if Galaxy of Adventures is canceled) or if they will give up and try to make the most money they can by selling action figures to adults for as long as possible. Demanding collectible prices for items that are still, more or less, toys, technically speaking.