While Star Wars High Republic has been delayed until 2021, Lucasfilm have not been idle. Without much fanfare various key characters from the High Republic have received a redesign in the past weeks. Plus, character designs for High Republic Yoda and a Trandoshan Jedi were added. So what do the characters look like now? Click through to see the designs. 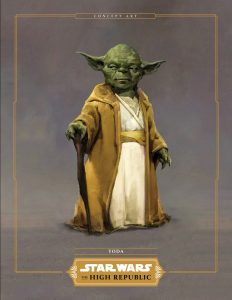 Maybe you remember the original character sketches that were shown in early 2020. The reception was rather lukewarm, so maybe Lucasfilm decided to have the characters redesigned partly based on fan feedback.

To give you a quick reminder: this is what the female Jedi Avar Kriss looked like when the characters were first introduced. Avar is “the brightest, most noble example of Jedi-hood”, according to the official character bio: 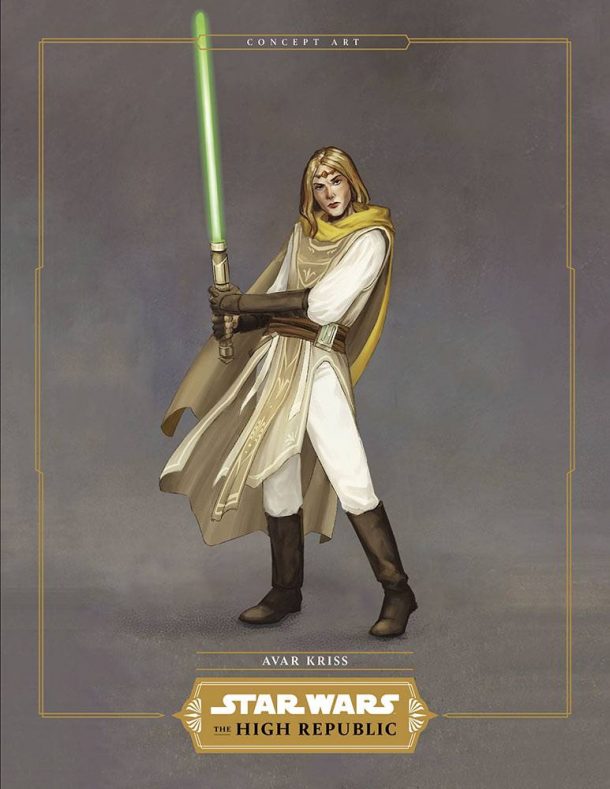 “Androgynous rock star” is probably a good caption for that piece of concept art.

Anyway, the other character designs were also a bit lackluster, and they were all very, very beige. The updated concept art introduces two different costume sets for each character. A very, very beige/white Jedi Temple outfit and a dark brown/white mission outfit. The Jedi simply love brown, it seems. But how do the characters themselves look? Well, in my opinion they look a lot better now.

This is the new design for Avar Kriss, who now actually looks like a woman: 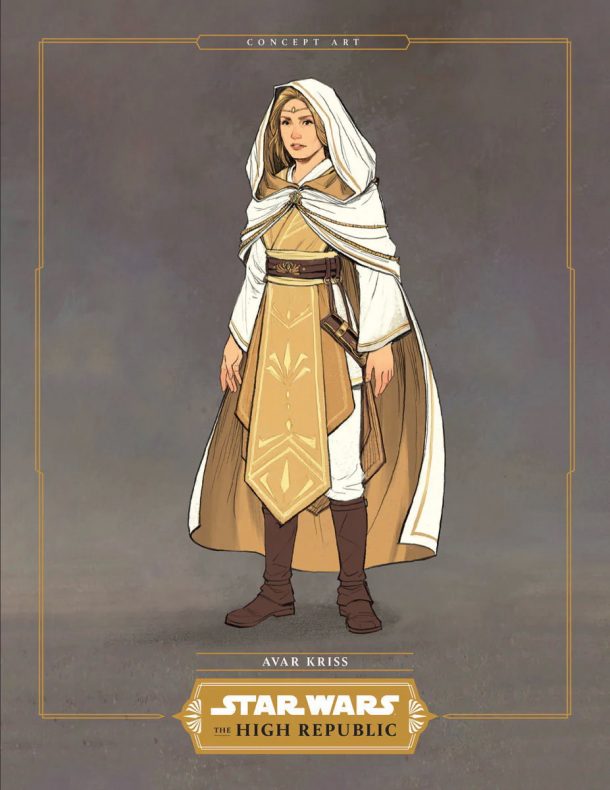 This shows Avar in her temple outfit, but as soon as the Jedi go on a mission they change into their mission garb, a habit that must have fallen out of fashion by the time we meet the Jedi during the prequel era 200 years later. 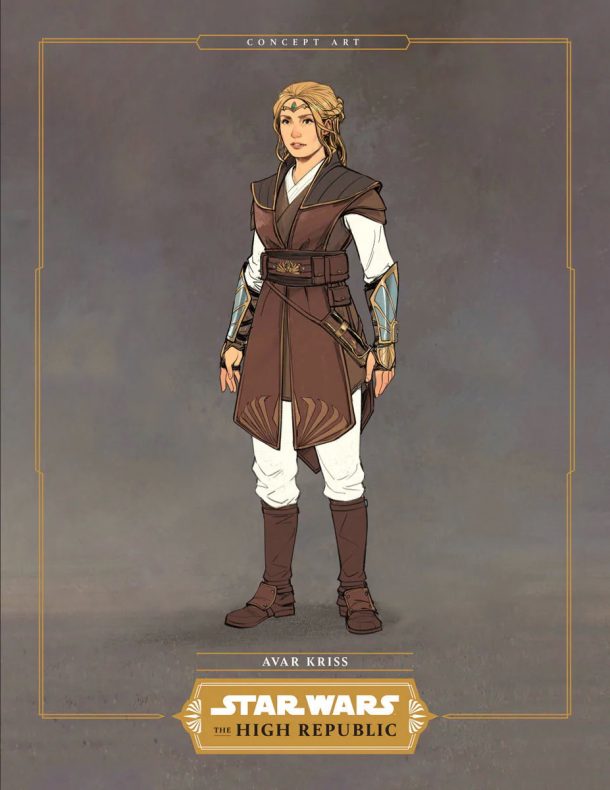 Avar Kriss in her mission outfit

The other Jedi follow the same pattern, white/beige temple outfit, brown/white mission outfit, I will show you the mission outfits for a few other characters.

Stellan Gios, an “optimistic and well-respected Jedi Master”, who used to look really generic, now sports a beard and all new hairstyle: 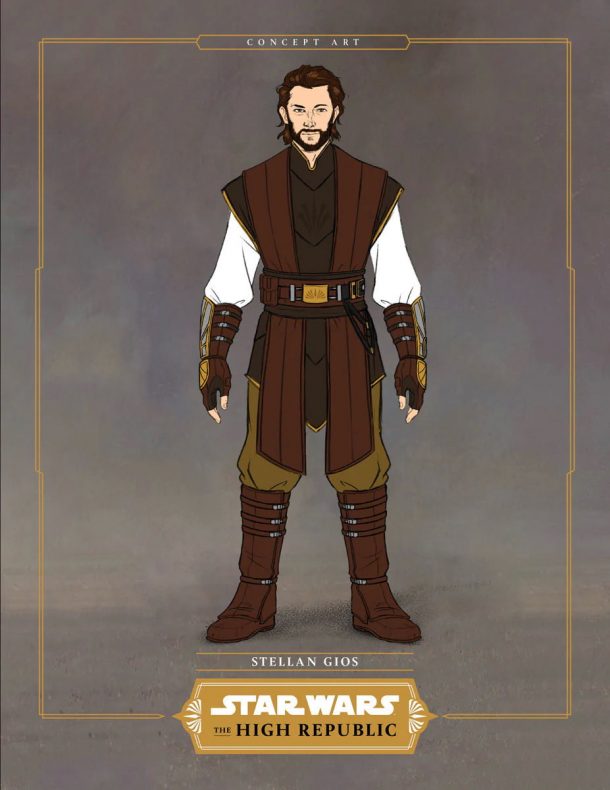 The actual character design for Keeve Trennis, the “young firebrand Jedi”, has not changed that much, only her costume is different now. 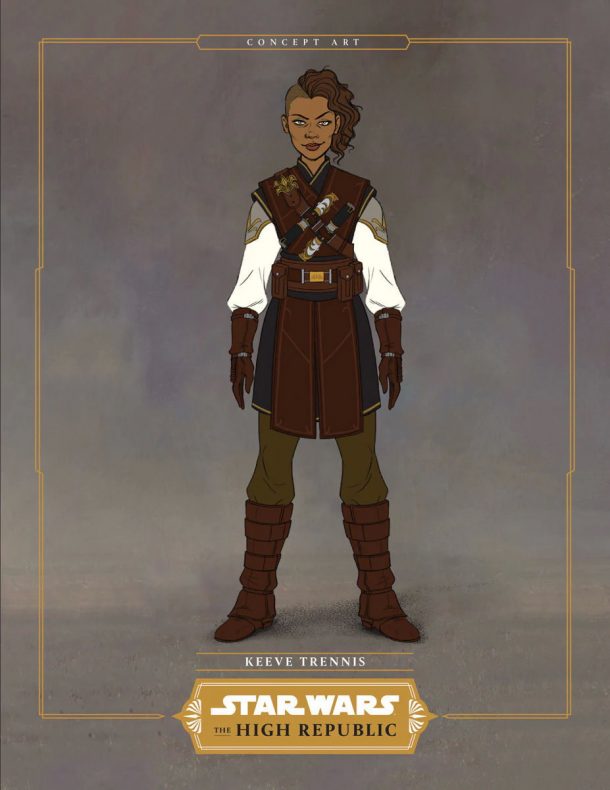 Keeve Trennis in her mission outfit

She still has that somewhat impractical Martinez sister hairstyle, I suppose she will be the Jedi with the “attitude”.

And then there’s also a Trandoshan Jedi named “Sskeer” (good luck pronouncing that name), a “tough Jedi Master that doesn’t quite fit the mold”, he will apparently feature very prominently in the Marvel High Republic comics: 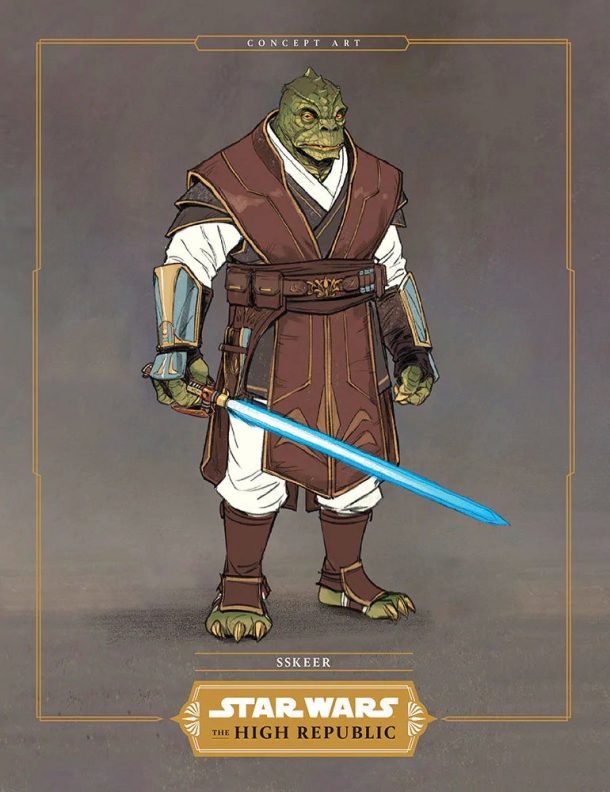 Sskeer in his mission outfit

I wonder if the authors still want to have dinosaurs in Star Wars, unless they were all huge fans of Trandoshans and just didn’t remember the name of their race.

And Yoda is of course already a member of the Jedi Order, he will be in the books/comics (but probably only as a minor character). This is Yoda’s mission outfit: 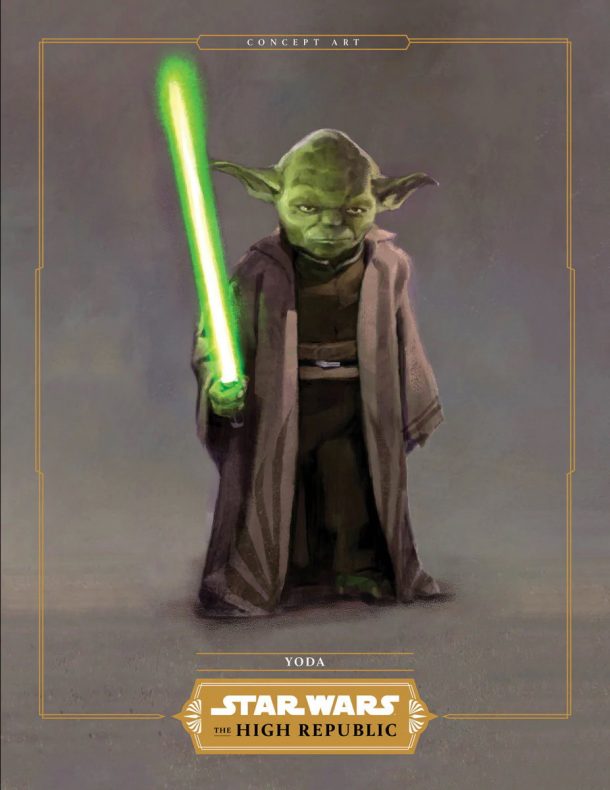 Yoda in his mission outfit

It seems that Yoda began to prefer a more beige color palette for his outfit when he grew older. But during the High Republic it was all dark browns for him, not too much unlike Anakin a few centuries later.

So… what do you think of the redesigned characters? If, for some reason, Hasbro would give us High Republic era action figures, would you buy them? Are you looking forward to the cross platform event series beginning in January 2021? The basic premise is still a mysterious hyperspace accident that tears a ship apart and causes havoc all across the galaxy, as wreckage drops out of hyperspace in random places after the incident, putting various planetary systems in danger.