Now this is a very weird find. A photo of a super articulated Return of the Jedi Boba Fett action figure made by Diamond Select Toys has appeared online. The figure was found at a Disney Park / Hotel. It is not a fake as far as I can tell. The figure seems to be in the 6 inch / 7 inch scale (difficult to tell without a reference for size, but DST usually makes 7 inch figures), comes with two extra hands and some effects pieces for the blaster and jetpack. Click through for more! 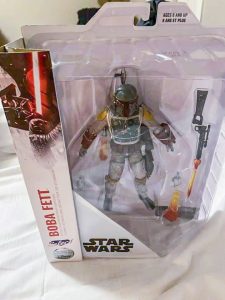 Diamond Select was contacted and all they would say is that the figure is NOT a Disney Parks exclusive, even if the sticker says “Exclusively At Disney”.

So what do we have here? Hasbro doesn’t have the exclusive 6 inch action figure license in Japan, here Bandai and Mafex also offer figures. Could it be possible that Hasbro also no longer has the exclusive license to make 6 (or 7) inch scale Star Wars action figures outside Japan? Maybe the new licensing deal traded lower fees for non exclusivity?

If Diamond Select has entered the Star Wars super articulated action figure business then it would be interesting to know what their plans are or what the exact deal is. So far we know almost nothing. If the figures are 6 inch then the Black Series has direct competition, if DST is making 7 inch scale Star Wars action figures then we’d have an all new scale and the question is if anyone would ever want a 7 inch scale Star Wars collection in additition to the Black Series.

What do you think? If another player has entered the Star Wars action figure business it can only be a positive thing, competition is healthy. Now the big question is if the 3.75 inch license is still exclusive to Hasbro. So far no 3.75 inch Star Wars figures by another company have been sighted.

UPDATE: I unarthed another photo of the figure and it seems Boba Fett is not quite 6 inch scale, but it’s not 7 inch scale either, it seems the scale in somewhere in between. But you could probably display the DST Boba Fett with your other figures. 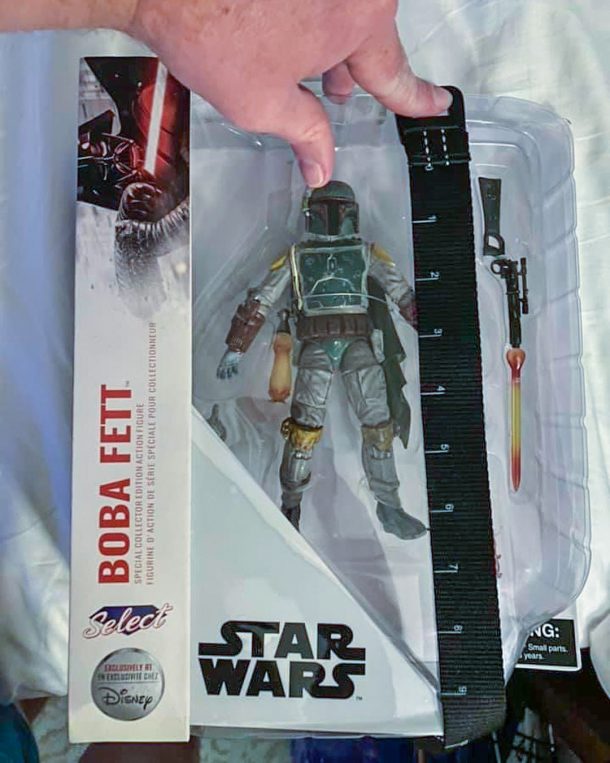 The figure looks decent enough, but the helmet sculpt may be a bit off. The effects also look somewhat cheap.

Thanks to Matthew Cohen for the alert and photo!