S.H.Figuarts is focusing more on The Mandalorian! The Beskar Mandalorian and Baby Yoda aka The Child were released a few days ago and are shipping to me, I’ll get the figures by the end of the week (hopefully). IG-11 is coming next month and hopes are that he is much more accurate and a lot better than the Black Series offering. But SHF is not stopping here, the Heavy Mandalorian and The Armorer are also coming to the line. Now the big question is: will collectors outside of Japan still want these figures when Hasbro is offering a great Heavy Mandalorian figure and just announced the Armorer as well? As usual materials used (SHF is known for using very high quality plastics) and accessories may be the deciding factor here. Click through for some additional info and photos! 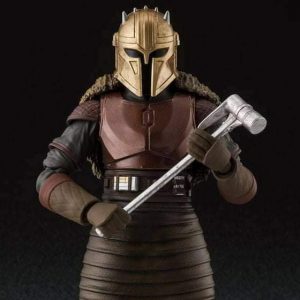 The Armorer with her argumentation aid

The Heavy Mandalorian does come with a number of accessories, the figure has effects pieces for the blaster rifle and jetpack and you also get a small vibroblade, so the Mandalorian and Heavy Mandalorian can have their knife fight. And of course you get various hands, which is standard for SHF figures. 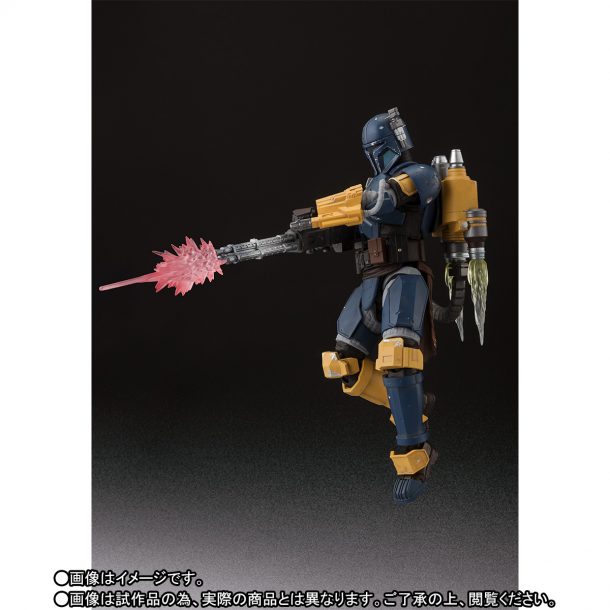 And this is the figure without the effects pieces: 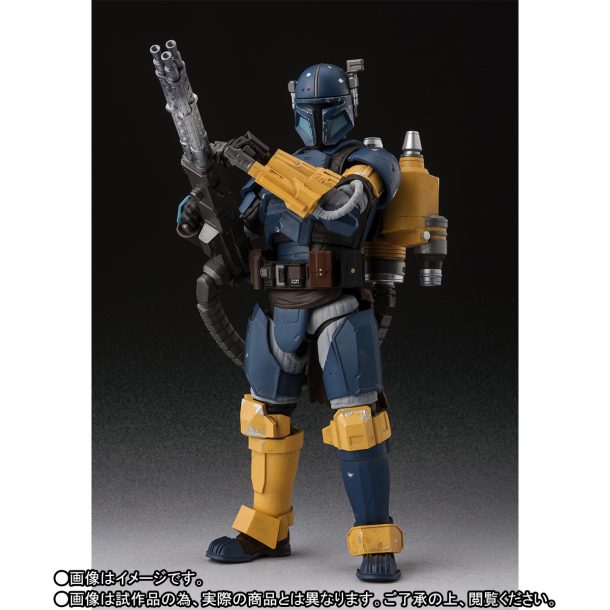 As is to be expected the sculpt seems to be just that little bit sharper than the TBS version and the used materials will be higher quality as well.

The question is if you want to pay 12,100 Yen for him (plus shipping), which is a whopping $115 or 98 euros! Usually the various etailers offer some discounts so the figure may cost a few dollar/euro less, but still, this is one very expensive Heavy Mandalorian.

Pre-orders go up on October 1st! Head to the usual Japanese etailers to get him! 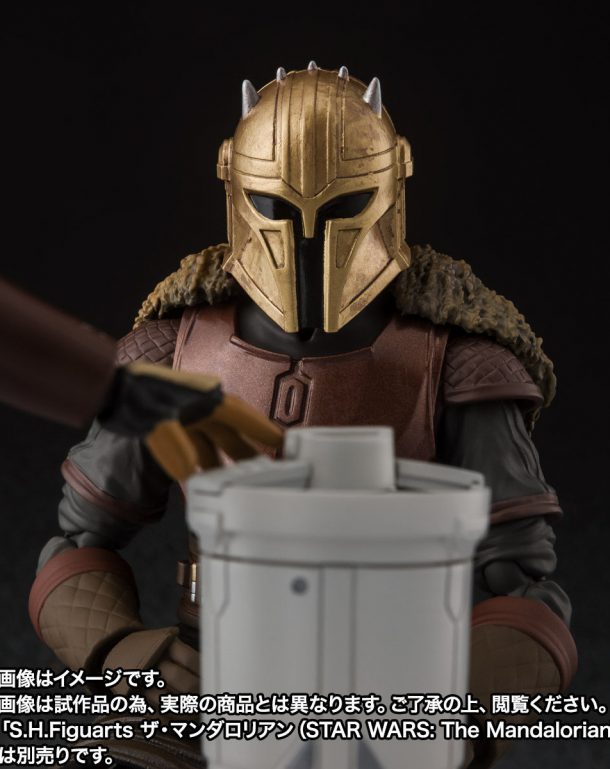 “I brought some ice cream for dessert!” 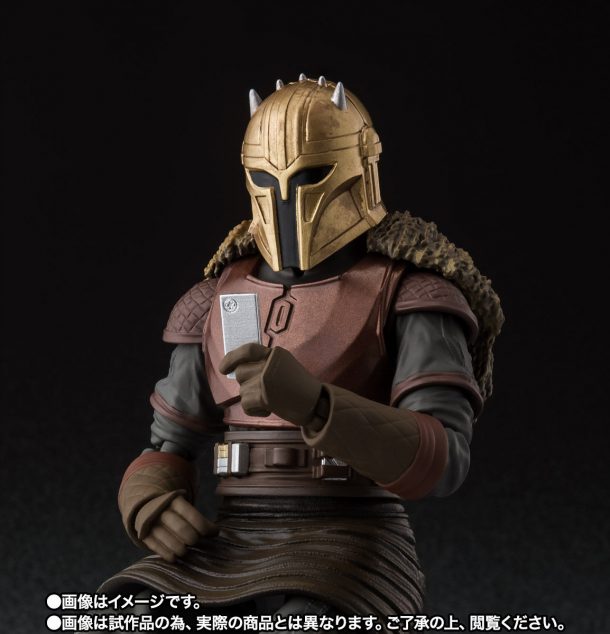 “He still wants one beskar ingot for two scoops of ice cream???” 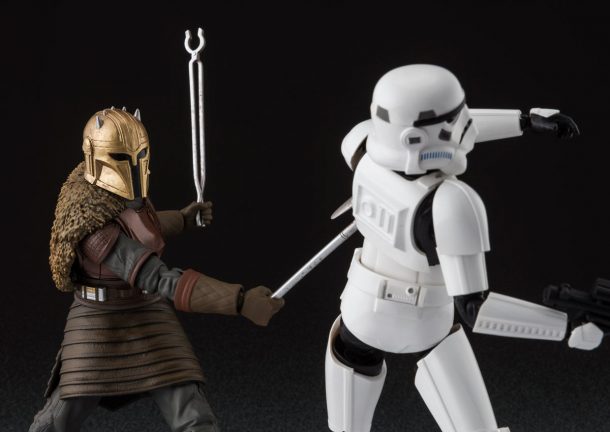 “That’s what you get for interrupting my well deserved dessert!”

And here is a direct comparison with the TBS Armorer and a cardboard stand Armorer which is the closest we have to the real thing: 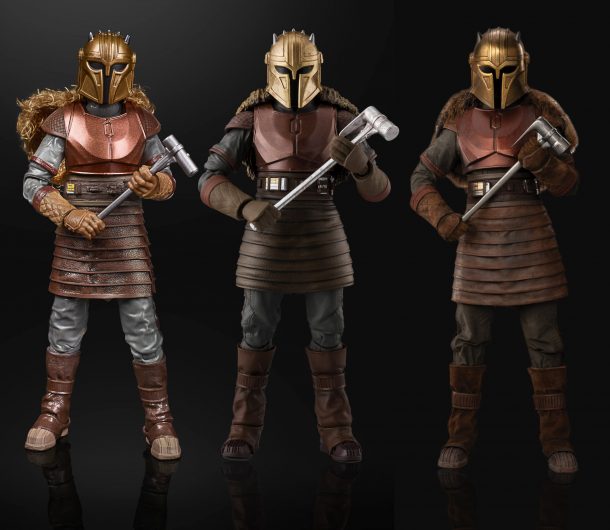 As you can see there are several distinct differences. The TBS version comes with some odd looking faux fur cloak, whereas SHF opted for sculpted plastic which, in my opinion, does look a lot better. The details on the belt have different paint apps, there is more paint detail on the SHF figure. Hasbro opted for a more shiny copper look for the armor and helmet, wheras the SHF Armorer has darker armor, less shiny, and a more gold colored helmet. Hasbro’s armor seems to be too bright, SHF is a little too dark. Then there’s stitching on the SHF trousers (you can see the stitching also on the photo of the Armorer used for the cardboard stand), this detail seems to be missing completely from the TBS version. The detail on the boots is also much sharper on the SHF figure. The gloves are much too bright on the TBS version and SHF, while not perfect either, seems to be closer to the actual color used for the gloves. Overall the TBS Armorer, while certainly good looking, still looks more like a toy (it IS a toy, technically speaking) and quite plasticky vs the collectible figure from SHF.

However, the skirt on the SHF figure is a little bit too short and overall the TBS color scheme for the skirt is more accurate. TBS boots are much too bright however, SHF boots are a tad too dark on the other hand. On the cardboard stand photo the trousers seem to be more of a dark brown color than grey, but the bright grey color used on the TBS figure seems to be more incorrect than the dark grey used by SHF. But as usual the question is  under what light the Armorer was shot for the cardboard stand figure and what light was used for the figures. So comparing colors between objects shot under different lighting conditions is never 100% accurate.

The helmets are different as well, after looking at some additional screenshots I believe the TBS helmet visor is narrowing too much and the eyes may be too large as well, SHF seems to be closer to the real helmet used on the show here. Both TBS and SHF don’t get the color quite right, the actual helmet seems to be just inbetween, not as bright as the SHF helmet but not as dark as the TBS version. 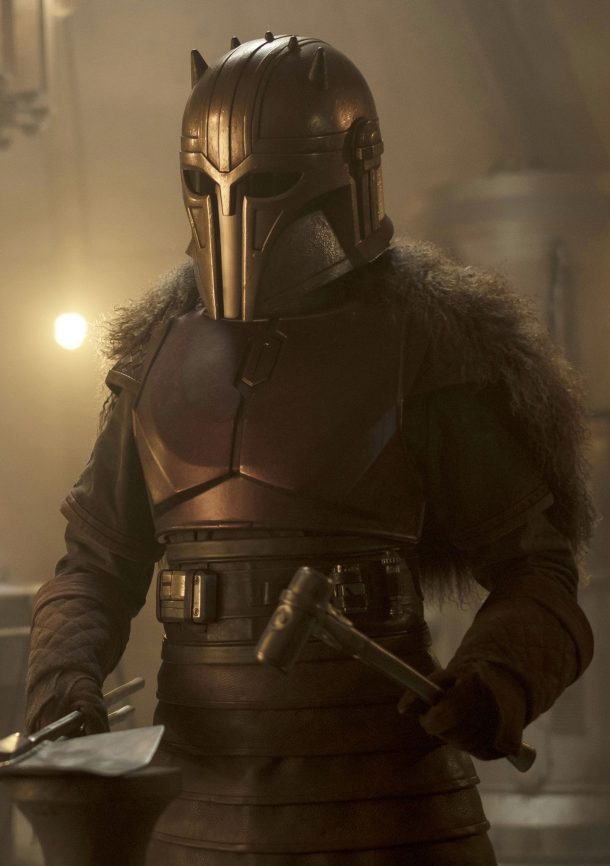 The actual Armorer on the show

Of course any screenshot from the show is color graded (unlike the promo photo used for the cardboard stand), but the SHF figure seems to be overall a bit more screen accurate, as in, what you see on the show (not in natural light).

The Armorer will be a web exclusive figure! That means one thing: anyone who wants her can pre-order the figure from most of the usual Japanese etailers. Pre-orders go live on October 2nd! But once the pre-order window closes you are out of luck. The web exclusive figures usually go for several hundred dollars after release so people who consider their action figures an investment should definitely think about getting the SHF Armorer. This figure will become valuable after release.

The figure costs 7,700 Yen, which is ca. $73 or 62.50 euros. Plus shipping. For Europeans the web exclusive Armorer may be a viable alternative to the, without any question, overpriced (in Europe) exclusive TBS variant of the figure. Of course you can always wait for the regular release of the TBS Armorer without most accessories.

And these are all the accessories you get with the SHF Armorer: 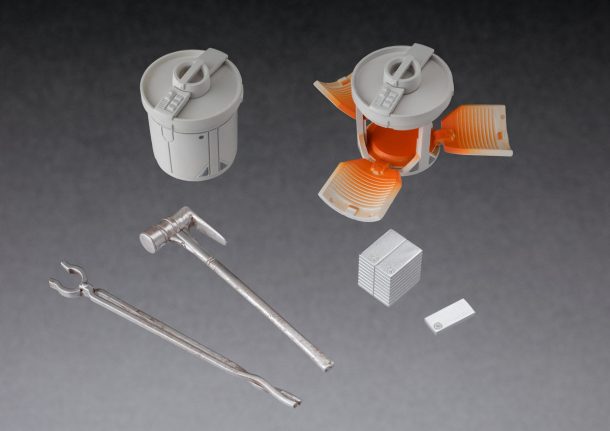 All the accessories you get (plus various hands, which are standard)

So, will you pre-order the Heavy Mandalorian? Will you secure the SHF Armorer for your collection?

My own verdict is that even though the SHF Heavy Mandalorian looks fantastic, the price tag is a bit too high and the TBS version is just good enough. But I will get the SHF Armorer and NOT pre-order any TBS version. In my opinion the SHF Armorer looks a lot better than the TBS counterpart. Also, with the included accessories the Mandalorian and Armorer can have their own little private ice cream party (read my Mando/Armorer fan fiction on Tumblr! – I am joking, of course.).