If you’re a The Black Series 6″ collector, Jar Jar Binks and the Return Of The Jedi Boba Fett should outrage you (more….) 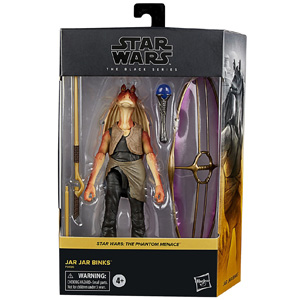 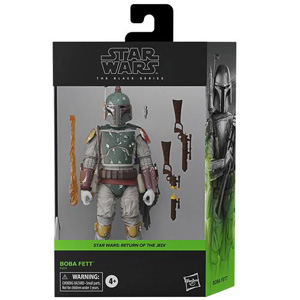 A wider box doesn’t mean the figure inside is a deluxe figure.

The outrage shouldn’t stem from Hasbro producing them. No, most collectors are thrilled over their official announcements in the line. What should outrage you is Hasbro trying ton “squeeze” these characters into a Deluxe format where they don’t belong. Obviously, both figures require a lot of extra tooling than the standard 6″ figure, but Hasbro needs to be wiser how they price out the line each calendar year, and not resort to gouging certain popular characters for more money.

If Teebo costs $19.99, then, likewise, “taller’ characters like Jar Jar Binks, and characters with more accessories, like Boba Fett, should ALSO be $19.99. I feel the same way about Zeb Orrlios. And General Grievous. Does everyone forget that the first Boba Fett figure was $19.99? Look at the mocked-up packaging for the new Boba Fett. They can’t even fill in the free space with other accessories. They’re pulling the wool over your eyes.

Also, does Hasbro think we have amnesia or something? Chewbacca has been $19.99 since day one. And they need to treat other characters with similar statures the same exact way.

It’s excellent that these long-awaited figures are finally ready to go. But how soon before we see the whole dang line change to a $29.99 MSRP? Why didn’t they try a $24.99 price point first, if they HAD to increase the price? What justifies $10 extra here?

It reminds me of buying cereal. You see a HUGE cereal box that says “FAMILY SIZE” and you pay extra money for the extra ounces inside, but then there is a disclaimer on the box that says “contents inside may settle during transit.” When you open the box, half of it is empty space. What’s the difference here?

Next Article: Weekend Fun: The Size Of The HasLab Razor Crest