Star Wars is, among many other things, known for its enormously sized space ships. Hasbro has made quite a few of the smaller vehicles for The Vintage Collection, and they even gave The Black Series a few vehicles. However, the toy versions are somewhat undersized. But what if Hasbro made scale accurate Star Wars vehicles? What would be the size? Ever wondered how big a Black Series AT-AT or a TVC Star Destroyer would be? Click through to find out!

What would Star Wars be without its wealth of various vehicles, space ships and moon sized weapons platforms? From car sized vehicles to small moons Star Wars offers everything. Hasbro has made quite a few vehicles for the 3.75 inch scale and even several for the 6 inch scale. But what would the size of the toys be if Hasbro made scale accurate toys for both The Black Series and The Vintage Collection? Would you need a new garage to display them? Or more like an entire district or even small town?

Disclaimer: all the actual sizes of the vehicles were taken from Wookiepedia (with one exception). I use metric, because 99.9% of the world uses metric, but for those unable to compute metric I also provide Imperial measurements.

To start things off let’s look at the Sail Barge Khetanna!

You would definitely need a new garage for a Black Series Sail Barge. But even the HasLab TVC Khetanna is not accurately scaled. The actual length of the Sail Barge is “just” 1.25 meters (49.35 inches). The TVC Sail Barge is only 3/4 of the accurately scaled size. And this is something that applies to virtually almost any Star Wars toy vehicle. Even though the 3.75 inch line is much better suited for vehicles most Star Wars vehicles are still just too big, thus Hasbro downsizes them by quite a bit.

But let’s get a bit more ambitious. What about the AT-AT? 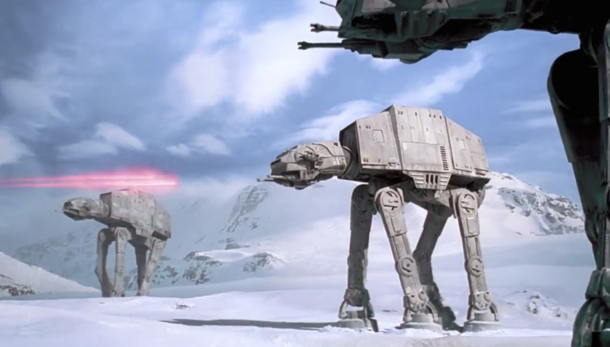 The TVC toy is underscaled by quite a bit, as expected, the true size of the AT-AT is just enormous. A motorized true to scale TBS version would make for a great electric horse. An accurately scaled TBS AT-AT would be taller than the average person and you’d definitely have to explain to your better half how to store or display this monstrosity. So a new garage would probably be in order. Unless you own horses, then you could store it in the stables.

What about the most iconic Star Wars space ship of them all, the Millennium Falcon?

So even the “BMF” is still more like the Mini Me version of the Falcon, the vehicle should be much bigger if it were accurately scaled. True to scale the Falcon would be quite long, longer than the average person. And if you are hoping for a HasLab TBS Millennium Falcon you should also think about adding yet another new garage to your home.

But what about the big ones? Just for laughs let’s look at how big several other Black Series and Vintage Collection vehicles would actually need to be, I mean, you all want your Death Star playset, don’t you?

So how big would a true to scale Death Star be?

You would definitely need your very own small town! Unless you are Elon Musk, then you could build your own toy Death Star in orbit and live there. But since most of us are not Elon Musk a TBS or TVC Death Star will probably not come to your store shelves any time soon.

And it doesn’t get any better with the 2nd version!

Manhattan is 21.10 km (13.11 miles) long, so it may just provide enough space to display your awesome TVC or TBS Death Star II toy.

What about the Imperial workhorse, the Star Destroyer?

When we thought Star Destroyers are big

Let’s just say a new shelf in your display room won’t cut it. You would have to acquire the entire block, flatten all the buildings and then display your impressive Star Destroyer toy. Unless you are Jeff Bezos, then you could probably build your own Star Destroyer toy and live inside of it, along with your servants.

The Super Star Destroyer is only more ridiculous. The toy would be bigger than any building on Earth.

The Burj Khalifa (the tallest skyscraper in the world in Dubai) is only 828 meters tall (2,716.5 ft), a TBS Executor would be almost twice the size and even the somewhat smaller TVC Executor is easily longer than the building. If Bill Gates, Mark Zuckerberg and Elon Musk team up they could definitely build their own Executor toy and get even richer by letting Star Wars fans live inside of it (not for free, of course). 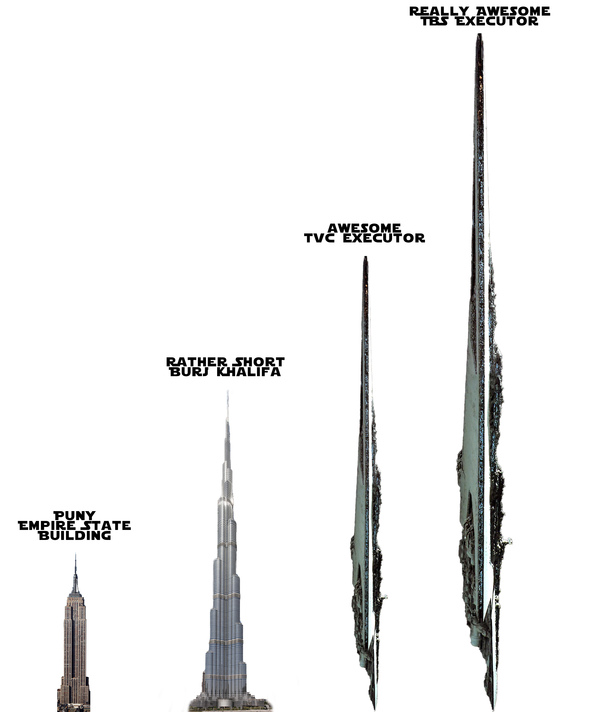 And just to illustrate how ridicuous everything is, here I show you how a TVC and TBS Executor would look next to the Empire State Building and the Burj Khalifa. Now imagine how big the box would need to be for Hasbro to ship that item.

And what about something more manageable? A Razor Crest, which is almost definitely coming to TVC soon? 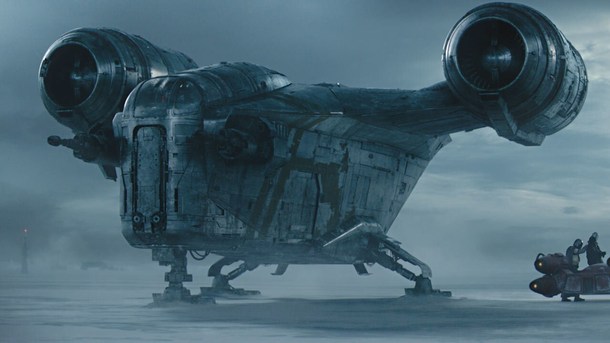 There are no official measurements for the vehicle but it is estimated that the Razor Crest is about 26.50 meters long (86.94 ft).

So if your future TVC Razor Crest is shorter you should demand a refund! TBS collectors would need to think about adding a third garage or so (after getting the AT-AT and Millennium Falcon previously). Unless you live in your TBS Executor skyscraper, then you have all the space you need.

And before fans of the sequels think that they get ignored let’s take a look at the Supremacy, Snoke’s flagship, which may not be as long as the Executor, but much, much wider!

In case you suffer from retrograde amnesia and have forgotten all about the sequels, here’s how the Supremacy looks, think “triangle in space”, the more technical term would be “flying wing”:

Someone is overcompensating here

Let’s just say a HasLab Supremacy is out of the question for now. And that concludes my look at the sizes of Star Wars toy vehicles for today!

Would you like to know the toy dimensions of other Star Wars vehicles? Let me know and there might be a follow-up article. But that’s it for today, my head is spinning because of all the Imperial measurement conversions I had to do, I will look at my metric folding rule now and relax for a while.

So… what is your favorite impossible Star Wars toy vehicle? Would you really want a true to scale AT-AT? And if you happen to be Elon Musk or Jeff Bezos, would you consider building your own toy Death Star or at least an Executor skyscraper? You are welcome to leave your thoughts in the comments even if you are not a billionaire!