Hasbro Revenue 29% Down in 2nd Quarter, But Star Wars Bucks The Trend!

Hasbro released their numbers for Q2/2020 earlier this week. And while things are mostly as expected, revenue is down by almost 30%, Star Wars bucked the trend! Click through for more!

Preface: if you hate reading long texts this is the gist – Star Wars toy sales increased when almost everything else saw unprecedented declines in the 2nd quarter. In other words: Star Wars toys completely bucked the general trend. Partner Brand sales are down 35% for the quarter, to illustrate how catastrophic the declines are, yet Star Wars toy sales still grew. Sales are shifting towards online! Hasbro is pursuing a “digital-first orientation” (for all its brands). Now you can jump to the comments section or you can read a bit more about the numbers and what Hasbro has to say. You may also find a bar chart further below for your pleasure.

Many people on YouTube, but also on fansites, love to paint a dire picture of the Star Wars toylines.

“I never find anything at retail”

“My store didn’t get new product in ages”

And so on and so on. However, it turns out that this is a very incomplete picture.

Hasbro released their numbers for the 2nd quarter 2020 earlier this week, and of course the numbers were heavily impacted by the Covid-19 pandemic. Let’s not dwell on Hasbro’s overall numbers too much, we’re all here for Star Wars after all.

However, Star Wars bucked the trend and revenue for the brand grew in the 2nd quarter! The only other partner brand with revenue growth is Frozen. 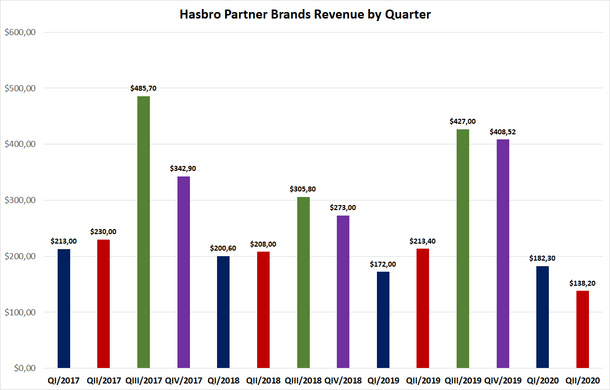 As you can see here the decline in Q2 is dramatic, it’s the lowest result ever since Hasbro restructured their segments (Hasbro had boys and girls toys before) a few years ago.

Revenue for Star Wars already bucked the trend in Q1/2020 as well, it was a top performing brand for Funko and Hasbro reported growing sales. That Star Wars bucked the trend under horrible conditions and despite a cataclysmic overall decline of the segment of more than 1/3 is nothing but impressive.
Of course some of the Partner Brands decline can be attributed to Marvel toy sales shrinking to normal levels again. Marvel just had its “The Force Awakens” moment last year and it was always obvious that the very strong sales associated with Endgame would decline again.

Hasbro, as usual, does not provide detailed numbers, but revenue growth in a time of unprecendeted decline is certainly a strong signal.

So it seems Star Wars toys are still popular, not The Force Awakens levels of popular, but the deep valley that the brand was in two years ago has been left behind and revenue has grown again since then.

Hasbro also talked about their overall strategy. Hasbro is pursuing a “digital-first orientation”. And apparently with some success. Almost 30% of global toy revenue in Q2/2020 was made online. Point of sales (i.e. places that sell Hasbro toys) increased, some markets saw a double digit growth here. Hasbro specifically mentions the US, UK, France and Australia here.
Hasbro has been talking about the shift to e-commerce in the past. Hasbro talks about a “dramatic shift” to online sales in Q2. Which is probably a surprise to no one. While retail is and will be an important souce of revenue, online will certainly keep growing. Even once everything returns to normal.
Sales declined much more in countries that still mostly rely on toy specialty stores and brick and mortar, not as much in countries where e-commerce is strong and you can buy things online.

In light of that brick and mortar retail inventories declined in Q2, Hasbro attributes this to the ongoing shift to e-commerce, temporary store closures and retail management decisions (note: we talk about all of Hasbro’s toys here, not just Star Wars).

On the supply front almost all factories and warehouses are open again. Also, shipments for Star Wars remained strong in Q2! And Hasbro is optimistic about the rest of the year, especially with The Mandalorian season 2 coming later this fall.

So, what’s the takeaway here?

Star Wars toys are still in demand. Star Wars toys are popular, despite a wideheld belief that no one wants them anymore. The fact that Star Wars toys (alongside Frozen II) toys completely bucked a dramatic decline of Partner Brand sales and actually saw a revenue increase is nothing but remarkable! Unfortunately we cannot say what segments exactly contributed here. But statements by some other toy companies point to The Mandalorian to being a top performer here, so maybe Baby Yoda toys played an important role.

Also, it is apparent that Star Wars sales are rapidly shifting towards online. Which is good news for those who like buying online, but it’s bad news certainly for those collectors who like to go on toy runs.

So when retail does not carry as much Star Wars as you’d like it’s not necessarily a sign of declining demand, as reported Star Wars revenue is still growing, despite the pandemic, but more a sign of shifting consumer habits as well. And remember, we don’t just talk about hardcore collectors here with their very specific demands, but all the casual collectors as well.

Here we are then: the times are crazy, the pandemic causes unprecedented declines almost everywhere, and Star Wars revenue still increases. So let’s be positive here. Yes, there are issues, yes, some brick and mortar chains need to learn a thing or two about e-commerce and online shopping, but Star Wars toys are neither dead nor unpopular. This is good news for Hasbro and certainly good news for us collectors, because it will give Hasbro plenty of incentive to make more Star Wars toys! And it’s not just Hasbro, Funko reported strong sales as well earlier this year, when the brand was a top performer for Funko. It seems The Mandalorian and The Clone Wars came just at the right time. And we have more The Mandalorian to look forward to later this year!

So, are you surprised that Star Wars is performing well? And: do you still want to buy at brick and mortar stores or are you accepting the fact that etailers (both specialy etailers as well as places like Walmart, Target and Amazon of course) are becoming more and more important and that Star Wars toy sales are shifting towards online?

Read the Hasbro earnings report here, here you can find the powerpoint presentation and you can read the transcript of the earnings call here!