Today I would like to talk about the cost of Star Wars collecting. Is it getting too expensive? Are collectors like the proverbial frog in the hot water that gradually gets hotter and hotter that they don’t even bat an eyelash anymore when a Star Wars toy goes for $400 these days? Click through for a discussion! 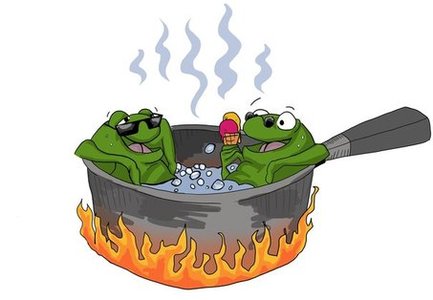 When I saw that price I thought to myself that 500 Euros used to be almost 1000 Deutsche Mark (many countries in Europe got a new currency in 2001, most people still remember the Deutsche Mark). And when you think about that sum, $400, 500 Euros or 1000 DM I cannot help but find that insane.

What plastic toy in the world is worth all that money?

Why do collectors even pay these prices?

Have we all been like the proverbial frog in the water that gets hotter and hotter until it boils? Is it boiling already? Or is there still time to jump out of the water?

I mean, think about what $400 (or 500 Euros in Europe) can get you… you can buy a washer (a really good one), a tv set (a big one), a very decent smartphone, you can probably also get an old used car for that kind of money.

So does anyone actually think that a toy made of plastic with some paint applied to it and a few electronic features that are really very basic is more expensive to make than a washing machine? A tv set? A smartphone? Have we become so accustomed to $500 barges, $100 vehicles or $400 Falcons that we accept it as “normal”?

I think it’s not normal.

A toy should have toy prices. A huge Playmobil castle is less than $200. Still expensive, but you get a really huge castle with several figures.

I would love to know what the production costs for a toy like the TVC Falcon are these days. If it’s more than for a modern tv set or smartphone then Hasbro is certainly doing something wrong. I cannot imagine how injection molding a few parts of plastic and then applying some paint to it can cost more than assembling a smartphone and manufacturing the chip, battery, camera module and various other parts. And it can’t be size, a washing machine is substantially bigger than any Star Wars toy and has more parts.

So why have (some) toys become so expensive? Because collectors have been willing to pay that kind of money? Or because making the toys has become more expensive than making complex electronic devices or appliances?

How do you as a collector justify spending $400 on a toy? Or even $500 on a barge? Are some toy companies trying to demand high end collectible prices for what is, and always was, basically a toy for kids? That mostly adults buy the toys these days should not matter here, these things are still toys, it says age “4+” on the box. Not “16+” or so.

What do you think? Do you think the toys are worth their money? Do you think they are overpriced? The fact that many people wait for clearance is probably a good hint here, I suppose most collectors these days feel prices are so out of whack, they wait.

Is Hasbro just taking advantage of hardcore collectors who cannot wait, will not wait and want sonething no matter what,  or who think they need to “save” a toyline by paying the full MSRP? Does Hasbro know that no matter what, a certain number of fans will always pay the premium price, and that the inevitable discounts are actually the normal price for normal people? Are hardcore collectors just suckers? Or are things like the Falcon or an X-Wing so expensive to make that MSRP has to be so incredibly high?

And I bet once the TVC HasLab has been announced there will be enthusiastic hardcore fans who will gladly pay whatever exorbitant sum Hasbro comes up with this time. Is it time to stop this madness? Or is it the new normal and Star Wars collecting is becoming something that only affluent people can afford? But then Hasbro should drop all the pretense that the “toys” are for “kids”. No sane parent in the world would give their kids a $400 Falcon to wreck and hurl around.

So what is your stance here? Do you ever think the time has come where Star Wars collecting has become too expensive and you want to stop? Will prices go up and up and up? Will we have $1000 Star Wars toys in a few years from now? LEGO’s UCS Millennium Falcon already was basically a $1000 “toy”. And people bought it. So maybe some hardcore Star Wars collectors will just pay any price (however, chances are, many people bought the UCS Falcon as an investment, some may call these people scalpers). I find it increasingly difficult to justify any of these insane prices.  What about you?

Previous Article: There Is No Other Way To State It: The TVC Galaxy's Edge Millennium Falcon Pre-order Was An Appalling Debacle