What Changed At Lucasfilm After Disney Bought The Company

J.W. Rinzler is an author of various “The Making of…” Star Wars books and former Executive Editor for Lucasfilm. He was with the company for 15 years and had begun work on his “The Making of The Force Awakens” book when things fell apart. Perhaps you remember Rinzler’s blog and the story revolving around his canceled “The Making of The Force Awakens” book. Eventually Rinzler’s blog, where he wanted to go into more detail, was deleted and Rinzler had to sign an NDA with Disney that basically forbids him from talking about many things Star Wars fans are really interested in.
But yesterday the ForceCast podcast, the official podcast of Theforce.net, had J.W. Rinzler as a guest and while he still cannot really divulge concrete details, he did talk a bit about the transition when Disney took over Lucasfilm. And what may be of interest to toy collectors, he also talks about what changed for licensees, like Hasbro. Click through for more details! 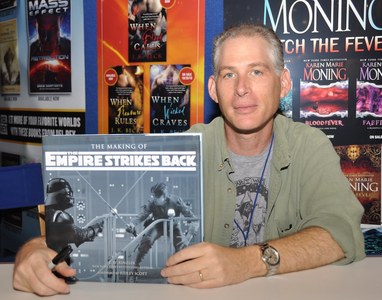 You can listen to the entire podcast on the ForceCast website, it’s about 70 minutes long, so you need some time. But the releveant quotes are beginning at the 17 minute mark, when J.W. Rinzler becomes a bit more concrete about the things that changed when Disney took over Lucasfilm.

First Rinzler talks about how things used to be, before Disney:

We were the licensor, and the licensees were anywhere from Hasbro, later LEGO, all these companies and then all the publishers, Dark Horse and Random House, and they could just pick up the phone and call whoever was responsible, there was no midlevel bureaucracy. And so we wanted the licensees to make money, because the more money they made, the more money we made.
And we wanted to work with them, and we didn’t complicate things by holding tons of things back and insisting that everybody come in hazmat suits who were going to read the script.
You know, it was very relaxed, in fact the first day that I was there, literally my first or second day, they just said here’s a VHS copy of work in progress Episode II, this is the latest cut, you have this little TV with the VHS recorder and player and you sit in this room and you watch it, because you need to know what is going on in order to edit the books that have to do with Episode II.

And then he talks about what changed, when Disney acquired the company from George Lucas:

And this is so far away… When Disney came on, and I will say this, I don’t think it violates any NDA, I’d been there for 15 years. I worked with George Lucas for all those 15 years.
And I couldn’t see a script for the longest time, for The Force Awakens. And so it was just the polar opposite of ways of working. It was all about control, and fear, and paranoia.
Not that Lucasfilm, we had some of that. I mean, it wasn’t like it was heaven on Earth. But it was far and away, like day compared to that night, it was just so much easier, and you know, we didn’t torture the licensees. Some of them could come in and read the script. Not everybody. But like, you know, the head person, whoever needed to read it for that company, could read it. So that they knew what was going on. And so there was just a lot of cooperation, a lot of sharing of information, and a lot of autonomy. If I decided a book was good and was done, it was done. It was published.

While Hasbro never really talk about how their working relationship with Disney is, or what they think about it, they did let on in the past that they are indeed kept in the dark about key aspects of the movies. There are statements by Hasbro employees, on video, where they openly admit that they found out about certain characters, like Crait Luke, when they first saw the movie in theaters, on release date. Which also implies, and Rinzler certainly hints at it, that even important licensees such as Hasbro can no longer read scripts and don’t know everything about the movie they are supposed to make merchandise for.

While J.W. Rinzler cannot go into great details here, it seems to be apparent that under Disney there is much less cooperation with licensees, that they are kept in the dark, that secrecy seems to be the top priority, Rinzler even calls it “paranoia”.

J.W. Rinzler also replied to a comment to a recent video he released on his YouTube channel, where a viewer wanted to know how the Lucasfilm company culture changed after Disney’s takeover. And Rinzler had to say this:

In my opinion… for the most part, in licensing, it wasn’t pretty.

Hasbro’s statements certainly corroborate that statement. It’s obvious that no licensee whose business is to make lots of money wants to find out about a key version of an iconic Star Wars character when they see the movie on release date.

We can only hope that in light of dwindling toy sales (even if sales recovered again in 2019 and early 2020) Hasbro managed to convince Disney that keeping things secret from them is not a bright idea. Because as J.W. Rinzler says: Disney is the licensor, Hasbro is the licensee, and the more money a licensee makes, the more money the licensor makes. So it should be in Disney’s best interest to cooperate with Hasbro as best as they can, instead of keeping things secret from one of their most important licensees.
The latest example of Disney secrecy is Baby Yoda, even if it was Jon Favreau who insisted on it, Disney is still the company that kept licensees in the dark. So instead of getting Baby Yoda toys in time for Christmas, the first toys were released around May 2020. Which is not an ideal way of doing business.

While Hasbro would never publicly admit it, it seems to be apparent that they are (or at least were) less than happy with how things are under Disney. It will be interesting to see how things will be for the upcoming series and movies.

You can listen to the entire podcast on the ForceCast website!

You can watch the “Everything Star Wars” video by J.W. Rinzler (and read the comment) on his YouTube channel!