There appears to be some production issue on the 40th Anniversary The Empire Strikes Back Artoo-Detoo (R2-D2) (Dagobah) action figure in the ASSORTMENT CASE. While the figure has no issues, we’ve learned that the packaging for units in the case assortments getting filled now all sustained some sort of damage. And they’re all like that and shipping as we speak. And we also understand that Hasbro doesn’t have replacements for them either. So, if you’re expecting a mint-on-card specimen, it may take some time to secure one, or until solid case packs are released in substantial numbers to serve as replacements. We DO NOT KNOW if the solid case pack units are affected by this damage as well. (But that seems to be the easiest remedy if Hasbro chooses this route to fix things.) We’re learning more about this in real-time, so stay tuned for any updates or clarifications to this story. We do know wholesalers are receiving credits for the damaged packaging. You can look all over the web, and this figure is out of stock almost everywhere. 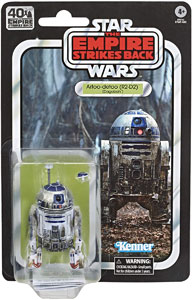 UPDATE: Now Entertainment Earth is sending out emails about this situation!