The Black Series On The Aftermarket

I talked about ebay prices for The Black Series and The Vintage Collection recently and today I stumbled upon a very informative website that will be extremely helpful to anyone who is chasing figures on the aftermarket or wants to sell their figures and gauge demand: Actionfigure411.

This website tracks aftermarket prices for various Hasbro toylines, GI Joe Classified, Marvel Legends, Transformers Masterpieces and, of particular interest to Star Wars fans, it has a complete list of all Black Series releases, both 6 inch and 3.75 inch, including the Walmart exclusives. The site doesn’t just track prices on ebay, Amazon and Walmart are also tracked, giving you a very comprehensive overview.

On the website you not only see a detailed price table with all figures ever released in the Black Series, you also can display charts that visualize how aftermarket prices developed over time. The site also tells you how many figures were sold in recent times and what the high and low price were. The data is updated daily. Unfortunately, for TVC collectors, there is only very incomplete data for TVC 2.0. But the data tells us a few interesting things about the popularity of various Black Series figures. So click through for a closer look at The Black Series on the aftermarket, I will also talk about 3.75 inch figures!

General Hux is a winner

This is how a price history chart for the Orange Black Series Line looks like on Actionfigure411: 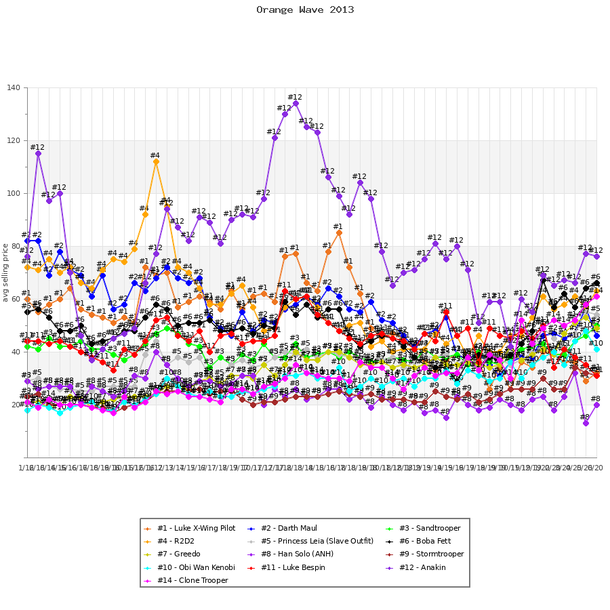 It is a little bit convoluted when all figures are included. However, you also have the option to display a price history chart for single figures.
As you can see Anakin (#12) is the most valuable Black Series figure from the Orange Line, even though you can get an updated Archive release with photo real.

When you look up Anakin you get a very detailed graph with his price history, the average price displayed, however, is only based on the last couple of auctions, so the price is relevant, it makes little sense here to include auctions from years ago, what matters to collectors who buy or sell on the aftermarket is how expensive figures are now.

Looking at this chart you can see that prices for Anakin went down when the Archive version was released but they have gone up again since.

And you can get this info for every single set that was ever released in The Black Series.

The most popular (most expensive, that is) figures for each phase are:

What you can also see is which figures gained value after release and which figures decreased their value. And there are a few (maybe not so surprising) things to observe here!

All figures from the original Orange Line but one have increased their value on the aftermarket. The sole exception is Han Solo where the average price is slightly below MSRP by less than a dollar. Even a figure that initially pegwarmed, Greedo, has greatly increased in value, Greedo goes for more than $50 currently. Even Obi-Wan increased in value.

The Blue Line has no figure at all that decreased in value. Commander Cody has become extremely expensive, he goes for more than $140, even repacked Obi-Wan Kenobi is now worth more than double the initial MSRP.

Things get interesting with the Red Box line. Here we have many losers and winners. And to the surprise of probably nobody the overwhelming majority of figures that have decreased in value are from the sequel trilogy.

Rose, Finn (Jakku), Jyn and Cassian are among the biggest losers here. This further illustrates that demand on the aftermarket for sequel trilogy figures and both Rogue One protagonists is lackluster. Prices for almost all sequel trilogy main characters, including Luke, Leia and Han are below MSRP. Zuvio is another big loser of course. However, there are also a few winners! And they may surprise you!

General Hux goes for more than $32 currently, he’s one of the few winners. X-Wing pilot Asty and Finn (FN-2187) are the other very few sequel trilogy figures that increased their value. The exclusive C-3PO with Babu Frik and the exclusive Sith Trooper have also gained value.

Rogue One has several figures that increased in value, the Scarif Squad Leader, Death Trooper, K-2SO, Chirrut and Baze all go for more than MSRP on the aftermarket. Figures like Krennic, Jyn and Cassian however are big losers.

Solo has three figures that go for more than MSRP currently, the Imperial Patrol Trooper, the exclusive Mimban Stormtrooper and Han Solo in his Mimban Trooper armor.

But figures based on the Original Trilogy or Lucas Era are not immune to price decreases on the aftermarket! Even if most figures that increased their value are either from the Lucas Era (including TCW) and Rebels/Mandalorian/Fallen Order, some figures from the Lucas era go for below MSRP currently.

Among them are the first release of ANH Princess Leia (the version with the horrible headsculpt), the AT-AT driver, Grand Moff Tarkin, Padme Amidala (Geonosis), Luke Skywalker (Yavin Ceremony) and again Princess Leia (Hoth) . There are several more Lucas era figures that lost value, you can look it all up when you go to the website. What surprised me here that the Emperor’s Royal Guard also decreased in value. You can get him for about $15 currently.

There are also figures that greatly increased their value you may not have had on your radar. Qui-Gon Jinn comes to mind, I think he looks somewhat odd with his extra eyes which were glued to the back of his faceplate, but that figure goes for almost $65 currently! Maybe it’s time for an updated archive release with photo real?

And when we look at the numerous exclusive sets we see that most of them have increased in value. Once again, most of the sets that lost value are sequel trilogy based sets with only 2 or 3 Lucas era exclusives that lost some value, but the biggest losers by far are the ST and Rogue One sets here once more.
The biggest winner is the Entertainment Earth exclusive Clone Trooper set which goes for almost $350 currently. The biggest loser here is the Target exclusive Rogue One 3-pack with Cassian, Jyn and the Death Trooper, you can get the set for less than $24.
Also, I hope you all got your Fallen Order Purge Trooper, the figure was only released six months ago but already goes for close to $80 on the aftermarket. And even the relatively recent Amazon exclusive Palpatine set has greatly increased in value.

The 40th anniversary ANH figures have mostly increased in value, the Darth Vader Legacy Set is one of the few exceptions, once again Princess Leia has also decreased in value (it seems that even though Hasbro love Leia, collectors do not as much), even the current Hoth Version of her on the ESB vintage card goes for less than MSRP. The woefully underscaled and inadequate ANH R2-D2 goes for almost $60. People, for that kind of money you can buy the infinitely superior SH Figuarts version!

And now a quick word about 3.75 in figures. The, by some people at least, much maligned original 3.75 in Black Series (the non exlusive figures from before 2015) almost all across the board have increased in value. Only six figures lost some value (Biggs being one of them), all the other releases are more expensive now. The Republic Trooper goes for almost $100, but figures like Bastila Shan, Darth Vader or Mara Jade (despite having an extremely bad hair day) greatly increased in value as well.

However, things look very different for the Walmart exclusive 3.75 in Black Series line, almost all figures have lost value, very much so. Some of the very few winners here are Ahsoka Tano and Prototype Boba Fett. The biggest loser here is not Rose, but Poe Dameron. Who would have thought! He’s the cheapest WM exclusive 3.75 in figure currently. Average price is less than $5.

Data for TVC 2.0 is very incomplete, only a couple of figures are listed, maybe the site owner will expand his data collection to also include TVC in the future, for now the site is primarily a great resource for Black Series collectors.

So what does all the data tell us? It tells us what collectors have known or assumed all this time: generally speaking figures based on the sequel trilogy are not very popular on the aftermarket, most of them have lost value, some of them go for very little money. But the OT/PT is not entirely immune, but the vast majority of Lucas era, Rebels, Mandalorian, Fallen Order and Legends figures have increased in value. Rogue One also fares quite well on the aftermarket, despite big losers like Jyn, Cassian or Krennic. And Clones are extremely popular.

That comprehensive aftermarket data may tell us why Hasbro released only relatively few figures for The Rise of Skywalker. If aftermarket prices are representative of demand at retail then sequel trilogy figures are not that much in demand. But to point it out: there is no general disinterest in Disney era figures, since Mandalorian, Rebels and Fallen Order figures are big winners, as well as most Rogue One figures, only Solo, despite being the first photo real wave, has only few figures that increased their value.

So, did anything surprise you here? Or are things as you expected them? One thing is sure, the general assumption that The Black Series does not hold its value and can be had for cheap is not entirely true, this only applies to most sequel trilogy and some Rogue One and Solo figures, sure, these releases make up close to 50% of the line, but the vast majority of OT/PT, TCW, Rebels, Mandalorian, Fallen Order and Legends figures increase their value and you have to have very deep pockets for some of the sets! Even former peg warmers are now worth some money, including Obi-Wan.